To the Moon, Allies!

So close and yet so political. 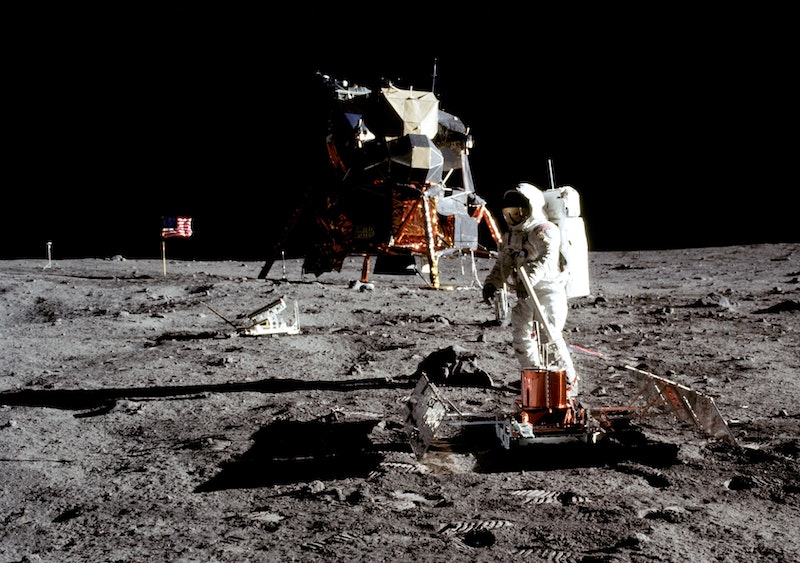 With a new Star Wars movie upon us, I participated in a podcast with six other politics-watchers (who are also nerds) talking about our new hopes and phantom fears. What many brainy sci-fi fans really crave, of course, is a franchise as cerebral as Star Trek used to be. The slapsticky, Beastie Boys-enhanced trailer for the forthcoming J.J. Abrams-produced, Justin Lin-directed, Simon Pegg-co-written entry in that series causes worry, though.

Clarke fans have something even weirder to look forward to in one month, though: the conspiracy theory comedy film Moonwalkers, based on the surprisingly popular theory that Clarke and director Stanley Kubrick were instructed to create 2001: A Space Odyssey by the CIA as a test-run for faking the first moon landing. (Different versions of the theory have Kubrick go on to drop hints in The Shining of what he’d done, drop hints about the sort of sex-cult freaks who run the world in Eyes Wide Shut, or even fake his own death around the time that film came out in order to personally orchestrate the events of 9/11, which, just to bring things full circle, were purportedly foreshadowed way back in the film 2001—note the title, for instance—even as the World Trade Center was being built.)

I admit there was something tense and weird about that one initial NASA press conference with the Apollo 11 astronauts the conspiracy theorists always point to, but with Trump rising in the polls, I don’t have the heart to treat conspiracy theories as harmless entertainment just now. So, I’m more focused on the moon’s real future, wondering which if any grandiose pronouncements about building a moonbase there—whether made by George W. Bush, Putin, or Newt Gingrich—will come to pass.

Trekkies, who are morally obliged to remain both cerebral and optimistic, must always hope that we’ll colonize that and countless other celestial bodies sooner or later. Let the Space: 1999 fans be frightened away by the potential for nuclear disaster, Agents of S.H.I.E.L.D. fans worry about aliens in the Blue Area, and Duncan Jones worry about outbreaks of Moon madness (when he’s not worrying about whether his newer film Warcraft is going to be terrible). The upbeat Trekkies know the moon awaits our astro-men.

Of course, politics won’t vanish up there, nor be as clear-cut as the light and dark sides in Star Wars. Perhaps it will all work out a bit more like Heinlein’s The Moon Is a Harsh Mistress, reportedly being adapted as a film by Bryan Singer (of X-Men fame): bureaucratic Earth politicians tampering with the lives of anarchist and capitalist lunar entrepreneurs.

With Elon Musk talking seriously about Mars colonization—and half the politicians at the semi-scientific Paris climate conference convinced Earth may still be doomed—perhaps lunar and other off-world real estate will one day seem as enticing as a trip to the pleasure planet Risa or fighting lessons at the New Jedi Academy. Then, no doubt, we can continue bickering and conspiring but in space.