A Nine-Episode Reaction to Star Wars 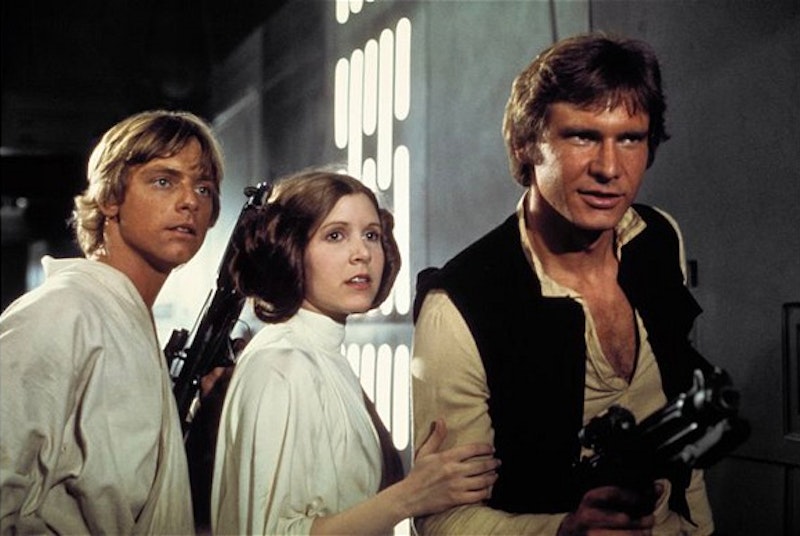 No spoilers here—except to say that the new movie, which unsurprisingly is comparable in quality to J.J. Abrams’ earlier Star Trek reboot, really isn’t very political compared to the prior six episodes of the series. Who controls how much of the galaxy on what basis really isn’t as important in this one as who’s attacking whom at the moment.

I. Nonetheless, the anticipation period prior to this week’s big Force Awakens release has already inspired political commentary, perhaps most prominently Sonny Bunch’s neocon defense of destroying the planet Alderaan in the original film (I’m going to start just using the Episode numbers from now on—we’ve reached a critical mass of Star Wars films that makes me think ignoring subtitles and what got produced when may make things easier for everyone).

II. At least Bunch is mostly-joking, which is more than can be said for, say, Max Boot whining in a recent column that Ted Cruz isn’t warlike or pro-surveillance enough, one of the best advertisements I’ve yet seen for Cruz as the libertarian/conservative consensus candidate at a dark time for both movements.

III. The libertarian folks at Reason hosted a whole panel discussion on Star Wars, and whatever else you may think about the series’ politics, it should never be forgotten that it’s about resisting a tyrannical government and as such was reportedly condemned by the Kremlin back in the early 1980s as subversive. They knew a threat when they saw it.

IV. You’d think Star Wars fans, aside from Sonny Bunch, would understand that behaving like violent stormtroopers is evil, but several apparently sent death threats to political commentator Katherine Timpf for saying she dislikes the movies. Those who dislike Star Wars may be terribly wrong, but before acting creepy about it, ask yourselves: what would Yoda do? Hate leads to suffering.

V. Episode IV would likely have been seen as more libertarian had Lucas not lopped off the first five or so minutes just prior to release. You can now watch that bit as an outtake, and in it Luke’s pal Biggs tries to convince Luke to leave Tatooine and join the Rebellion in part by warning him that the Empire is nationalizing businesses and that soon the Skywalker farm may not even belong to the Skywalker family. Would that all my fellow Gen Xers had seen that conversation and grown up as wary of government land-management and socialism as Biggs.

VI. Instead, the biggest dose of overt politics the saga as a whole leaves us with ends up being the prequels’ Gore Vidal-like tale of a republic declining into empire via war and deception. There are worse lessons.

VII. And for those worse lessons, we need look no farther than other scenes in the prequels in which Lucas heavy-handedly names the villains things like “Nute Gunray” (that is, in effect, Newt/Reagan). Luckily for the maintenance of free-market attitudes, the precise gripe of the evil Trade Federation was so muddled, right from the opening scroll of Episode I, that most viewers probably don’t even remember whether the Trade Federation was pro-tax or anti-tax (alas, the villains were in fact anti-tax, though you had to read the novelization to be sure).

VIII. People of all stripes tend to be easily bribed into loving government and accepting taxation so long as government once in a blue (harvest) moon spends money on something they like. So it is, for instance, that NASA works overtime lately to remind us how cool space exploration is and that it might yield easily-grasped goodies such as detailed photos of Pluto. That planetoid’s blue haze was cool and all, but it’s pretty obvious NASA now hypes to the hilt anything that smacks of sci-fi-like or alien-spotting potential, as if a bit more funding might enable them to find Endor (one NASA scientist claimed the Pluto haze photos would cause 2015 to go down in history as a pivotal year—ha!). Don’t oversell it, NASA. That may yield serious disappointment.

But then, science—which I concede is humanity’s closest approximation to truth—is often more a ritual of validation than strictly a method of proof, a ritual especially likely to be deployed when the conclusions affirm prevailing political preferences. Take, for example, that very weak but much-hyped study claiming all women are secretly lesbian or bisexual. You know that conclusion made some people too happy to bother double-checking it—but it’s still legit science and went through all the required motions.

IX. Don’t forget that podcast I was in, anticipating Episode VII with a whole panel of political geeks. We all came away with a renewed love of the franchise, I think, though we might have spent more time talking about Lucas’ heavy indebtedness to his sci-fi sources of inspiration, such as Dune, Lensmen, Flash Gordon, Edgar Rice Burroughs, and more.

Given all the giddy pilfering and derivative ideas, I suppose we can’t be too harsh on Abrams’ Episode VII for being one more wallow in all our favorite Star Wars tropes. They were already pretty old—pardon me, mythic! My love is unabated.