The World's Most Infamous House of Horror

Is Russ McKamey a showman or a psychopath? 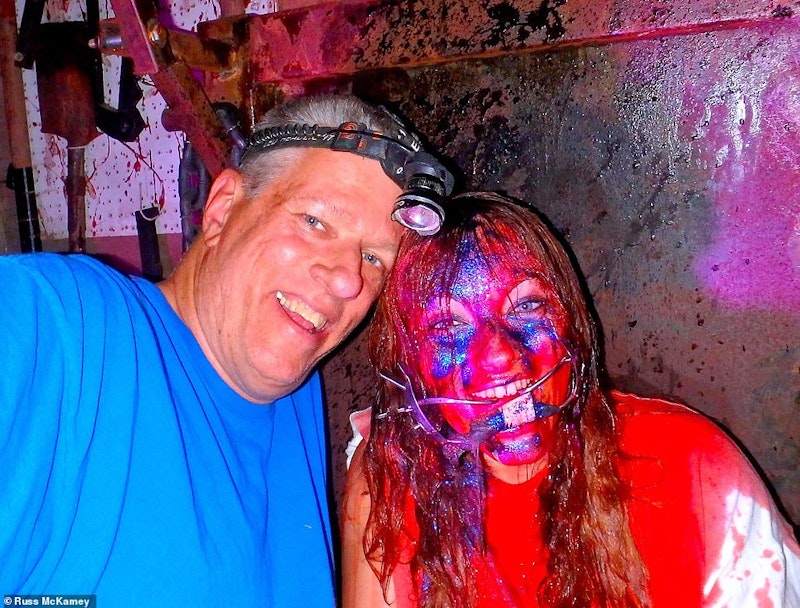 If someone has set up what he calls an impossible challenge with a $20,000 prize, but refuses to spell out the exact details, what does that tell you if the price of admission is a bag of dog food? If you decide to go for it, this individual will provide you with a nearly two-hour video he claims depicts every single misery-filled, failed attempt at what he playfully calls "the tour," just so there's no doubt about what he's planning.

You could end up like aggrieved participant Amy Milligan, a California resident who's on video being pulled around by her hair and slapped before put in a freezer in a few inches of dark-colored water and blindfolded while water's poured over her head. Milligan says that's more than she signed up for.

"The tour" is Russ McKamey's "McKamey Manor," a house of horrors in Summertown, Tennessee that its proprietor bills as "the most extreme haunt in the world.” That's not just hype. To be accepted as the target of this twisted endeavor, one must sign a 40-page waiver, and pass a physical exam, a psychological fitness evaluation, and a drug test. But despite the rigorous vetting process, not a single contestant has ever successfully completed a full tour, according to McKamey. One person who took what he called a "watered down" version of the experience said he left covered in blood and axle grease, smelling "like a combination of mildew, raw sewage and slaughterhouse."

McKamey, who spent 23 years in the military (CIA rumors are rampant), employs "actors," many of whom are reportedly ex-Marines who've taken the McKamey Manor tour themselves to assist him in achieving such degradation in service of breaking the human spirit for not-yet-determined motivations. They subject entrants to such rigors as choking, enclosure in confined spaces, cutting, forced ingestion of unknown substances, exposure to insects, and submersion in cold water. While his doubters speculate that McKamey's partial to gruesome horror films of the Hostel variety, he says he's more of a Psycho kind of guy, and that he's playing mainly mental games with McKamey Manor, even while admitting, on camera, "You know you're going to get cuts, bruises, sprains, possible broken bones, maybe death."

I'm wondering whether Russ McKamey is more of a "psycho" guy than a Psycho guy, but on the surface, at least, he appears anything but that. Contrary to expectations, there's not even a whiff of Norman Bates or Hieronymus Bosch about this person who gets off on brutalizing his fellow humans. The easy-mannered McKamey Manor guide is as jaunty as a late night comedy show host. But his insistence that he relies on attacking the mind, instead of the body, doesn't hold up to scrutiny. When the Netflix series Dark Tourism covered a self-styled tough guy's attempt to survive McKamey Manor, he lasted about as long as it takes to smoke a cigarette. You can't break someone psychologically that quickly. McKamey pushed his head under water and insisted he stay submerged for 30 seconds.

McKamey says he has the power to make people imagine that bad things happened to them. He claims that, via hypnosis, he can put someone in a kiddie pool and make them think there's a great white shark in it with them. Not until recently has he ever allowed participants a safe word to end the ordeal. Before that, it was up to McKamey's discretion, and he doesn't have much of that once he's in his Terminator mode.

All of the failed participants of the tour recite a speech that McKamey wrote when they've thrown in the towel: "McKamey Manor kicked my ass. It took my lunch, stole my milk money, and I quit. I should not have done this." But there's speculation that McKamey, to suppress incriminating evidence, won't release the videos of those who've taken the tours but have declined to make this concession speech for the camera because they're angry and feel abused. Amy Milligan says she gave a positive exit interview because she feared that McKamey wouldn't release the video of her tour unless she played along. The video McKamey did release was, according to her, heavily edited, as brutal as it was.

McKamey is a mystery, as are his "victims," if that's what they really are. Some can be seen joking with their tormentor after he's broken them, and others return for another try. None can say they weren't warned. Russ McKamey really doesn't want to pay out $20,000, and he'll do whatever it takes to prevent that.