The Vision Offers Superhero Family Drama as YA Cliché

And there’s a Coneheads vibe. 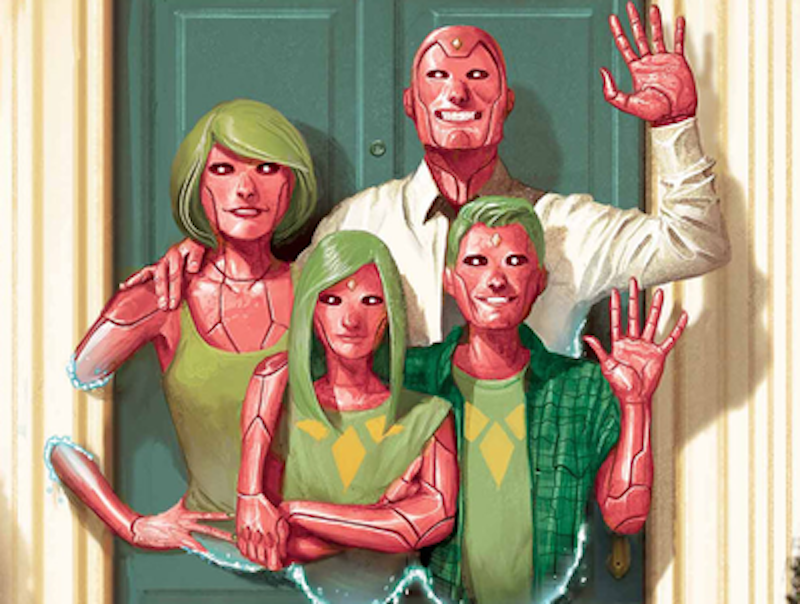 Addicted teen to friend: “But you don’t have more of it or anything, do you? Just asking because, y’know, whatever.” Friend: “Oh, yeah, sorry, totally forgot about that. I noticed the machines weren’t doing as well after I used it. They were getting all weird. So I trashed my supply. Just taking up room.” Addicted teen: “Oh. All right. Yeah, cool. Yeah…” All this is from a comic book, the bottom row of panels on a page. Turn the page and a big panel appears: a fleet of alien spaceships over the Brooklyn Bridge and, further back, Manhattan. The two teens are superheroes. “Anyway we should probably get to it,” one of them says. They fly up and fight those spaceships. But we don’t see that part.

The Vision, Marvel’s new series about the android ex-Avenger, shows us superhero comics as YA fiction. I don’t think the writer was trying to be a smart-ass about this. Cliché calls to cliché, that’s all. If a young guy—say the robot half-brother of an android superhero—is going to have a major life-problem, that problem will involve substance abuse. From there it follows: how the habit was planted, grew, the self-esteem deficit that brought it on, the nervous jonesing that resulted. But new nouns show up: “Chase had found that some of his equipment, after it was used, benefited from being near vibranium. When his tools were close to overloading, it was as if being near the vibrating metal allowed them to rest.” Find some kind of peace, you know?

Vibranium is a science-fiction metal that kills vibrations. Stan Lee and Jack Kirby made it up in 1966, and the property has been kicking around the Marvel universe ever since. Now, finally, it’s become an opiod for robots and cyborgs. I think that’s by far the best purpose it’s been put to (mutations and a doomsday chain reaction were predecessors), but the robot heroin is just a prop in an Afterschool Special. This outcome strikes me as typical. Superhero comics have sprung so many bright ideas. But now—and this has been going on most of the century—the comics crush bright ideas. A bright notion has no chance: writer and editor will truck in clichés from a whole different field to club the notion to the ground.

“Just asking because, y’know, whatever.” That’s not even bad writing. I like the exchange, and the way the text sketches the young robot’s self-esteem gap back when he was a hero. (“His life was not his life, but this life, the life of an Avenger… That was the life every hero wanted. That life had to be a good life.”) But it’s dead writing. The Vision family at the dinner table, after the death of the family’s son in a vibranium-related tragedy, is even more inert. As in Ordinary People from long ago, we see the numbed survivors locked into Protestant (or android) terseness: “Yes, you are right, dear. It is good.” Dad sits there with his tie, Mom quietly comes apart. But everybody’s got a red face like a mask with lit-up eyes, and the dialogue snippets are locked in special scalloped word balloons. That’s different. Then again the effect of the Vision family, there in the suburbs, is always a bit like that of the Coneheads. The Vision pondering moral choices (“I have rigorously applied these scenarios to a variety of philosophical and religious traditions”) has a good deal of Data and Mr. Spock. So that stuff isn’t so different.

Yet the alien space fleet, hoving into the glum YA novel, is a thrill. Not because space ships are so new, but because the pages in question are sunk in turquoise and aqua-green, the figures and faces are black line drawings against the murk, there’s a great deal of urban backdrop (brick chimneys, water tower, factory windows), and the boys look like they were drawn by somebody who wanted to show the lopsidedness of confused youth’s unformed features. The effect is YA as I remember it from junior high, the sort of YA that takes the sad world and dumps it like laundry on the head of a bummed young reader. And alien space vessels appear, right there above the Brooklyn Bridge and a lot of bricks and factory windows. Superhero comics are good for a panel like that, now and then. But don’t get your hopes up.