The Twisted Code of Vigilante Justice

Kamandi 20 (“The Electric Chair”) spits in the face of vengeance while exploring the darkest sides of morality and post-modern alienation. 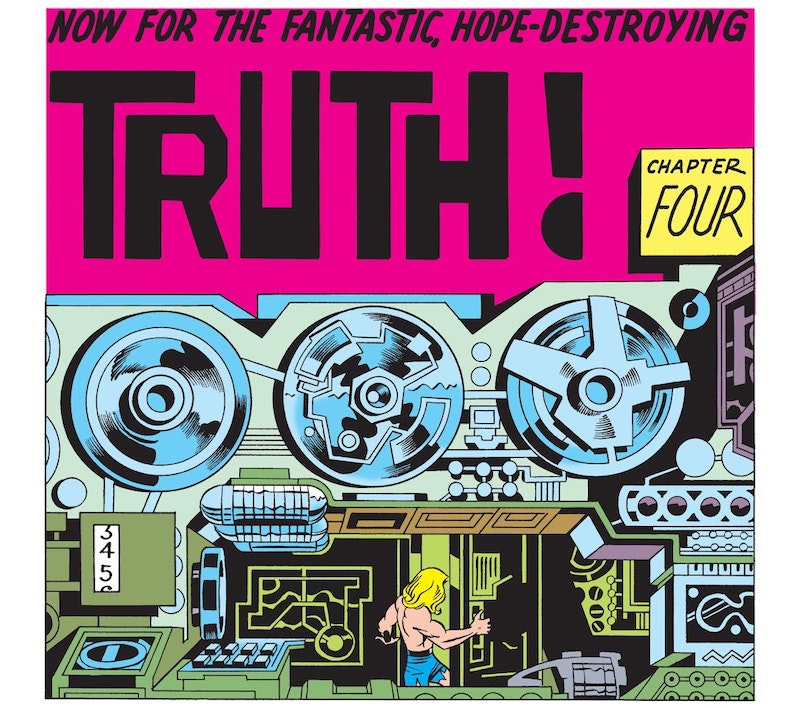 Story arcs in Kamandi tended to stay thematically focused. Jack Kirby usually kept it breezy and simple in the series’ more action-driven narratives (i.e. The Gopher People arc in Kamandi 17 and 18, and the giant monster-centric plots from 7 and 21), while dialogue, characterization, symbolism, and exposition became dense in dramatic tales of dystopian neurosis (the Tracking Site arc in Kamandi 9 through 10, the early Sacker’s Co. encounters from 11 through 14, and the Dominion Of The Devils arc in 26 through 28).

Issue 20’s “The Electric Chair” was a big exception to the rule. “The Electric Chair” spits in the face of vengeance while exploring the darkest sides of morality and post-modern alienation. Even with its plentiful chase scenes and brawls, Kirby never overshadows the gloomy central plot twists that make this an iconic work of technophobic sci-fi.

Kamandi 19 focused on a gimmicky concept involving convoluted historical re-enactments of Chicago’s mafia-ruled past. While it does feature a dynamic twist ending that references Corman’s cult hit Westworld, the rest of the story is mostly fist fights, car chases, and gun battles. Its am homage to The Untouchables and the frantic gangster cinema of the 1930s and 40s (i.e., James Cagney’s Public Enemy, the original 1932 Scarface, 1941 Veronica Lake vehicle Gun Crazy, etc.). Chaos also rules the first half of Kamandi 20, but midway through Kirby switches to a pensive mode. Consequences of the odd conclusion from 19 set the stage for a meditation on the nature of capital punishment, the lynch mob mentality, and the controversial role that performative culture plays in shaping societies.

An unlikely hero in this issue is the mutant gorilla soldier Sergeant Ugash. In earlier issues this hothead egotist does everything in his power to kill and capture Kamandi. Here the Last Boy On Earth is thrust into circumstances that force him to team up with Ugash. At one point Kamandi must save the simian warrior from bloodthirsty criminals and crooked cops. Controlled by a fried A.I., this lynch mob awkwardly attempts to force their twisted code of vigilante justice on to the unsuspecting Ugash.

Cold solitude is the horror Kamandi confronts when he’s finally face-to-face with the circuit-bent “Godfather” who administers the plastic reality of “old Chicago.” The Last Boy On Earth roams baffled through the psychotic main frame’s maze of wires, cogs, gears, plugs, sprockets, microchips and widgets. He’s dwarfed by an immense automated control center that pumps out the computerized ouroboros of a rigged justice system designed to protect the worthless greater good of a society built on than delusions and death wishes.

The ending of “The Electric Chair” is riddled with tense prose that presents the “hope destroying truth” of faux Chicago, and a prescient snapshot of digital culture gone mad: “The bleak reality strikes with unrelenting force…like The Great Disaster which spared the replica… and swallowed the original.”