He said, she said, over and over again. 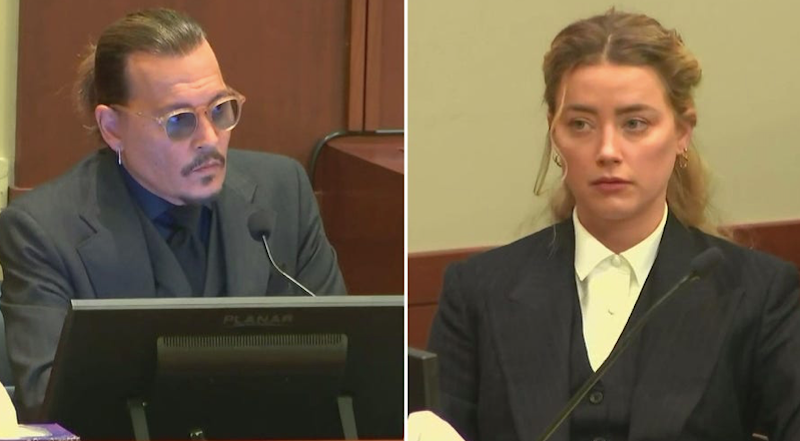 Johnny Depp’s in the midst of a trial brought upon by his $50 million lawsuit for defamation against Amber Heard, his former wife from a marriage that lasted 13 months, but probably seemed like 13 hard years to both of them. The testimony's been lurid so far, including Heard's account, from the witness stand, of how one of the highest-paid actors in the world (until her Washington Post op-ed that prompted this legal action, at least) chased her around their kitchen on December 15, 2015.

By her account, she threw an object at him to slow his momentum, but to no avail. Heard said she remembers Depp screaming and getting on top of her before hitting her in the face. She fled up the stairs and she remembered the sound of the actor's boots on the stairs as he pursued her, grabbed her by the back of the hair, and dragged her into a room at the top of the stairs. Depp then allegedly shoved his wife over a chaise lounge, causing her to smash her head on an exposed brick wall, after which he head-butted her "square on the nose." Heard said it was about the worst pain Depp had inflicted on her in his many acts of violence. She said Depp dragged her by the hair onto the bed in another room, put his knee to her back, and punched her repeatedly. She said she remembers him putting his mouth to her ear and screaming (sounding Iike a wounded animal, she said) over and over, "I fucking hate you."

After watching at least 10 hours of this trial, I'd say that this was either just another day in the bizarre, mutually-masochistic Depp/Heard marriage, or it was a complete fabrication. I'm looking forward to Depp's defense team getting a shot at Heard during cross examination. Certainly Heard's testimony so far against Depp has been damning, if we’re to accept her word. The Aquaman star testified about various other acts of violence Depp inflicted upon her, but their veracity's in question. The LAPD officers who went to Depp's penthouse on May 21, 2016 in response to a domestic violence call said they saw no visible injuries on the actress, and no evidence of disruption in the penthouse. On May 27, Heard filed for a restraining order against her husband, showing up at a Los Angeles courthouse with a mark on her face that, six days earlier, police officers didn’t identify. Witnesses in the trial have said under oath that they saw Heard and her sister practicing fake punches in the days after the alleged attack.

Amber Heard appeared on James Corden's late-night show the day after the alleged hair-dragging attack, with no visible injuries to her face. She did produce photos taken after the incident (two days later, by her account) that showed her bruised face. We don't know what Depp's face looked like, but he claimed, on the witness stand, that the head-butt was accidental as he grappled with his wife in an attempt to subdue her after she'd attacked him. We also don't know if those photos were fabricated.

It was damning when Heard testified that Depp raped her with a Maker's Mark bottle, although it's a he said/she said situation, and probably untrue. It was also damning when Heard's lawyer, J. Benjamin Rottenberg, read a few of Depp's texts to his friend, actor Paul Bettany, including this one: "Let's burn Amber. Let's drown her before we burn her. I will fuck her burnt corpse afterwards to make sure she's dead." Depp wrote that before entering into possibly the most mutually-destructive Hollywood marriage of all time, but hearing his own words read in a televised trial had to have given the Pirates of the Caribbean star some second thoughts about having taken this matter to court and exposing himself to the "Streisand Effect." Here's another text, from 2014, that may have given Depp pause when read in court: "I’ll smack the ugly cunt around before I let her in."

While watching this trial, I noticed that there's a legal loophole that should be addressed. Both legal teams made constant objections of "hearsay" when Depp and Heard were testifying. Trial witnesses generally aren’t allowed to quote those who are not in court. Fair enough, but Ben Rottenberg read headline after incriminating headline to Depp, as if media headlines meant to attract clicks even approach being evidence: "Why are all of Johnny Depp's movies bombing at the box office?" "Johnny Depp allegedly showed up drunk to movie premiere." "Vodka for breakfast, 72-hour drug binges, and spending binges that beggar belief." That last one's from the Daily Mail, and anything printed in that British rag beggars belief.

"Vodka for breakfast," however, is relevant to this trial, but not because the media brought it up. The defense is aiming to portray Depp as a drugged-up alcoholic who may have been so out of it that he can't remember his numerous acts of spousal abuse. One video that Heard surreptitiously took (illegally in California) of her husband pouring himself a huge glass of wine in the morning and smashing kitchen cupboards supports that narrative. Possibly, this strategy comes from a lack of hard evidence that Depp ever resorted to violence against his wife.

Depp's legal team produced witnesses who saw Heard right after various alleged beatings, but saw no marks on her face. This includes Heard's stylist, Sarah McMillan, who helped her prep for the Corden appearance. "I could see clearly," she said, "that Ms. Heard did not have any visible marks, bruises, cuts, or injuries to any parts of her body." That would indicate superhuman recuperative powers after the savage beating the actress claimed to have endured.

This is the most entertaining celebrity trial since O.J. Simpson's. Perhaps the most stunning aspect of it is the overwhelming support Depp has received online. Having looked at Twitter threads on the topic, and the comments in about a dozen YouTube videos containing footage from the trial, I'd guess that at least 90 percent of all opinions are in favor of Depp, and that's a conservative estimate. Even women who say they were once DV victims are not convinced by Heard's histrionic testimony. In one of those videos, I counted 25 women, and three men, in the Virginia courtroom the trial's being held in. American women are staunch supporters of Depp, and they're convinced that Heard's a manipulative liar.

Many signs point to Amber Heard being like a Bougainvillea tree—beautiful on the outside, but full of thorns on the inside. She looked at the jury too many times to see if they were buying her sensationalistic tales for me to believe anything she says.