The Sunday Funnies, Now Without Color 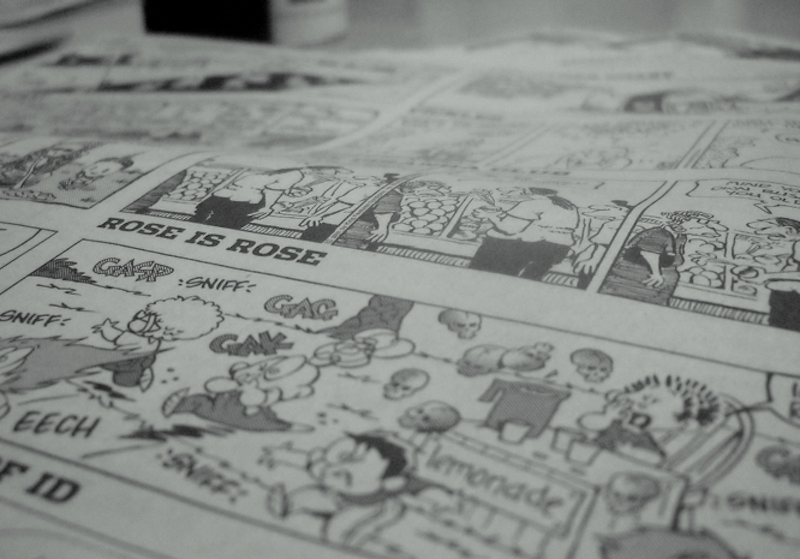 The first time the Sunday funnies meant anything to me was one weekend, late-1980s, when Opus and the gang caught Steve Dallas belting out "Billie Jean" in the shower. That was in the heyday of Bloom County, when the Sunday funnies section was actually two sections, and you got treated to a shaggy blast of patented Berkeley Breathed weird alongside the eye-popping, artisanal secondary-color splash of Calvin & Hobbes, not to mention still-new-if-dippy doses of Peanuts and the insidious family crack-em-up For Better Or Worse; it took me a couple years to get Doonesbury, but once I did I became a collector. Most of the other comics were worthless even then, but there was something special about no-holds-bared vivaciousness after a week of black and white strips.

The Sunday paper could and would mutate in innumerable ways over the years—reporters and typefaces coming and going, editorial biases shifting, circulation levels swelling and dissipating—but give or take some variations in page count, it was expected that the Sunday funnies would remain much the same long after they ceased meaning anything to anybody under the age of 30, give or take a seismic Boondocks or three. There's always been something reassuring about that, like knowing that Christmas will always come or that the late news is always waiting for you.

Would the Sunday funnies still be the Sunday funnies without color? Without Mother Goose and Grimm's grody hues and Dennis the Menace's poky, hokey shading, is this special end-of-week tradition enjoyed by so many—and media companies blowing ridiculous amounts of cash to enliven gag lines less amusing than Howie Mandel at his worst—worth hanging onto? This is no longer a hypothetical or existential line of inquiry. Last weekend, the local Daily Item, which publishes a six-page Sunday funnies section, split the difference between visual blargh and Charlie Chaplin blah: color on the outside, grayscale on the inside.

I spent a lot of time locked in disbelief, staring at large, six-panel comic strips with more intensity than I had in decades, actively attempting to will them back to vibrant life again, as if I possessed some kind of special latent mutant power that was just north of utterly useless. It didn't work, even a little, and simply amplified the futility of looking for justifications for the ritual. Without color, Hi and Lois felt that much more insipid, Foxtrot that much more tired. Without color, perusing Andy Capp becomes like playing Pong for the Atari; Prince Valiant achieves a woodcut goth gloom; Dilbert is suddenly something less than one-dimensional. If I consider the interior of last Sunday's section out of the corner of my eye, my mind tricks me into thinking the color is really and truly there, then when I whirl to take the view in full, I'm confronted by the dull, sorry truth of the matter. It's a distinctly unsettling experience, like having a cornerstone of my reality stolen and sold for scrap as I watch it happening.