The Subversive Comedy of MADtv

Sometimes it's the puerile jokes that give you the best laughs. 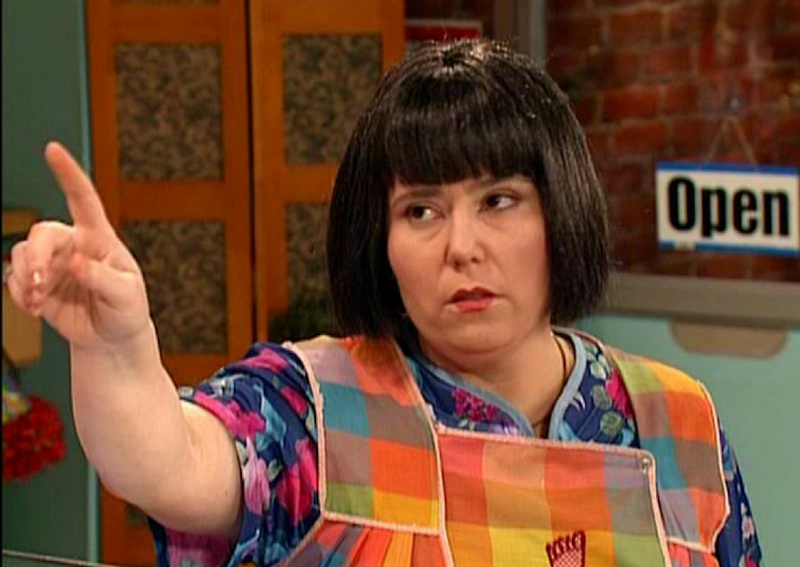 The first thing that struck me as I was watching MADtv on YouTube recently was that it fits in the growing category of things that couldn’t get made now. The show, which ran for 14 seasons on Fox, went out of its way to offend as many people as possible, but now that the easily offended are so powerful, that's dicey. Try to imagine the following exchange on TV in 2021: "The waiter's face looks weird." "Well, that's because he's Asian." In the same skit, the recurring MADtv character, Stuart (Michael McDonald, the funniest cast member), a grown-up with the mind of a child, pulls the skin around his eyes outwards in the forbidden gesture aimed at mocking Asians. That's instant cancellation material.

MADtv was fearless comedy that knew that it's the forbidden that often get the best laughs. People are constantly told they can't say this or believe that, but MADtv allowed them to tap into their primitive selves, a place untouched by enforced societal norms—they could laugh like children again.

There's a titillation factor involved when an audience is seeing something it's not supposed to see. For example, making fun of foreign accents can be funny, but now, when even suggesting that the coronavirus originated in a Chinese lab is "racist," it brings the scolds out. MADtv gave people license to indulge in such simple pleasures, especially with one of it funniest characters, Bunny Swan (Alex Borstein), an Asian woman who works at the Gorgeous Pretty Beauty Nail Salon, which she mispronounces as "Goja Pitty Booty Nay Salon."

MADtv, which aired on Saturday nights at 11, had the fortune of debuting in 1995, at the time when 20-year-old Saturday Night Live was showing its age after the loss of Dana Carvey, Jon Lovitz, Jan Hooks, and Phil Hartman. Too much success had produced a malaise at SNL, opening up a slot for a brash newcomer that wasn't burdened by a mythic past, expensive sets, and sky-high expectations. MADtv was born when television producer David Salzman and Quincy Jones bought the rights to Mad magazine. Patton Oswalt was the first writer Salzman and Jones hired. Ironically, last year on Twitter, Oswalt compared Antifa to American troops landing on the beaches of Normandy, although it's impossible to imagine MADtv giving one of the Democratic Party's sacred cows such kid-glove treatment. Unlike SNL, MADtv went after both the Democratic and the Republican parties. And the show didn't shy away from being mean, as in their Chelsea Clinton sketch that parodied her looks when she was just a kid.

Fat jokes were big. In one scene, an overweight bartender (part of the joke) tells a woman trying to order a drink, "No fats allowed." A customer exclaims, "Who's the heifer?" A bride and groom at their wedding puke together after finding out their relationship is incestuous because they're siblings. The comedy was broad. In a sketch parodying the TV show Family Feud, the host repeatedly pronounces a black contestant named Miger (pronounced MY-ger) as "Migger.”

While SNL always has always had at least one black actor, MADtv outdid them in the diversity department. It was the cast's diversity that protected it from the cultural enforcers who now call the shots. And while every few weeks SNL would have a black character acting thuggish, this was a regular feature of MADtv.

In a parody of People's Court, actress Yvonne Criddle, in full "ghetto" mode, tells the judge she lied to social services about her neighbor mistreating her kids, and the neighbor subsequently lost custody of them. The reason: the neighbor let some leaves blow into her lawn. The white judge, aghast, makes a black woman repeat, "I am an evil person." That went over a line that SNL never crossed.

The fact that MADtv portrayed racists as dumb and/or phony gave the show additional protection from the cultural police. In the scene at the Chinese restaurant in which man-child Stuart makes his eyes slanted, his mother (Mo Collins) calls her son a racist when he says, "I hate the Chinese," after finding out that he can't get a Happy Meal. Stuart then reveals her hypocrisy by recalling what she said about minorities: "Black people are not scary if they keep their hair neat," and, "The Chinese are ugly."

Comedy can become listless if its creators are fooled into thinking that they're trying to break new ground while actually hewing to the same formula that once produced success. This is what had happened to SNL, which was weighed down by its past when MADtv started. Although you could read about MADtv in the NY Daily News, the stuffy New York Times didn’t approve. There's a reason MADtv always did well against SNL.

In the age of "clapter"—audiences clapping at comedians instead of laughing at them—one can look back on MADtv fondly. It was funny because it didn't care who it offended, which freed its comedy to be fresh. Unlike the current group of humorless late-night comedians, they weren't trying to please anyone, which is comedy's kryptonite. I wish I could see all the sketches that Fox axed because they were too outrageous and offensive, even though everyone in the writers' room was rolling on the floor when they were in discussion. MADtv was a show that kept itself out of the cultural spotlight so it could go for broke.