Ted Lasso was handled well, in what could’ve easily been a cheesy sports/fish out of water comedy. 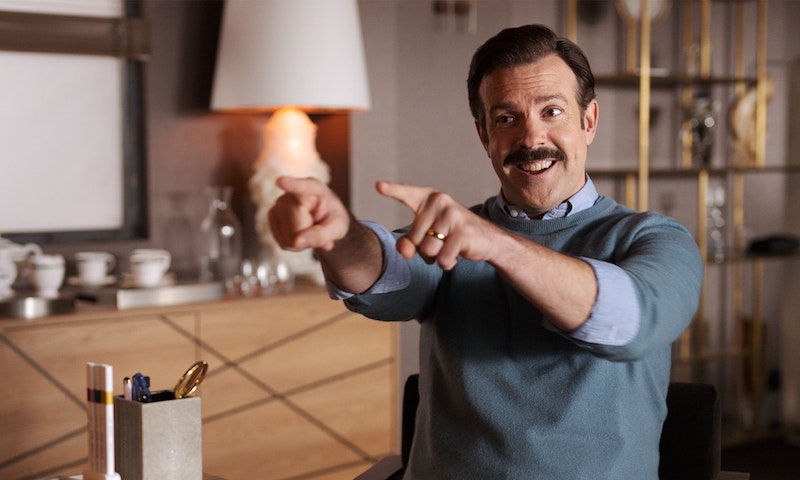 Ted Lasso didn’t do anything wrong, but it looks like he’s being punished. After the endlessly optimistic midwestern coach carried a college football team beyond expectations, he goes viral for his locker room dance. Soon after, he’s on a plane to England to coach the fictional European football club (or as Ted at first calls it, soccer) AFC Richmond. Through a quick exposition, the viewer’s told this might not be a good idea.

It’s soon clear that Ted was chosen specifically for his lack of experience, as he’s only coached American college football. Ted’s berated by fans of the team on the flight, and the club’s owner Rebecca Welton (Hannah Waddingham) awaits his arrival to intentionally drive the team into the ground in order to spite her ex-husband. Even in the face of all of this, both the show Ted Lasso and the character Ted Lasso refuse to be cynical.

The show is anchored on the character of Lasso himself. Jason Sudekis portrays Lasso smartly, not going for big laughs, but rather a consistent stream of positivity that refuses to be hindered. On top of this, the development of Ted Lasso was handled well, in what could’ve easily been a cheesy sports/ fish out of water comedy.

Ted Lasso is developed from a series of commercials on NBC sports. In the commercials, which advertised the arrival of the Premier League on the channel, put Lasso in sketch-like situations where he’s confused by the differences of terms such as offsides and tackling in relation to how they are used in American football. This makes for a fun advertisement, but it could never carry a show, and Sudekis had the foresight necessary to avoid attempting it.

Ted Lasso avoids the pitfalls of British vs. American humor by making Lasso such an accepting character. While people do have to explain things to him, he never complains, just smiles and usually thinks whatever cultural difference he has come across is neat or great. Ted Lasso sidesteps another potential pitfall wisely as an American show that centers on an English sports league could be fairly confusing. Again, the viewer relies on Lasso’s point of view. The American coach has never coached the sport before, so we can learn along with him.

While the show follows an American in England, and centers on a sports team, it’s really not about either of those things, and this is its true stroke of genius. As we learn more about Ted and why he’s in England, his son tells him over the phone that he doesn’t seem to be doing much while coaching. Lasso agrees, explaining that while he does do some coaching, it’s much more hands-off than American football due to lack of consistent play-calling. He explains his goal is just to make the players the best people they can be and hopes that this will lead them to victory.

This humanistic approach combined with Sudekis’ performance as Lasso bring the majority of the laughs on the show. Whether Lasso wants to talk to the team’s owner about her love life, or the team’s psychologist about her favorite book, he doesn’t care how busy they are or if they’d rather avoid him. Lasso’s guaranteed to enter the room with a smile and a compliment, and won’t be deterred by negativity. Ted keeps his head up even when being called a “wanker” when walking through town.

While many comedies such as Barry or Search Party find comedy by looking at life’s darker corners, Ted Lasso finds it by basking in life’s brighter corners. It joins a growing trend of shows that have the ability to get laughs in a feel-good manner, a long-needed rebuke of the Ricky Gervais-style cynicism.