The Rebirth of Pinball

Stern Pinball: The last pinball manufactuer... but maybe not for long. 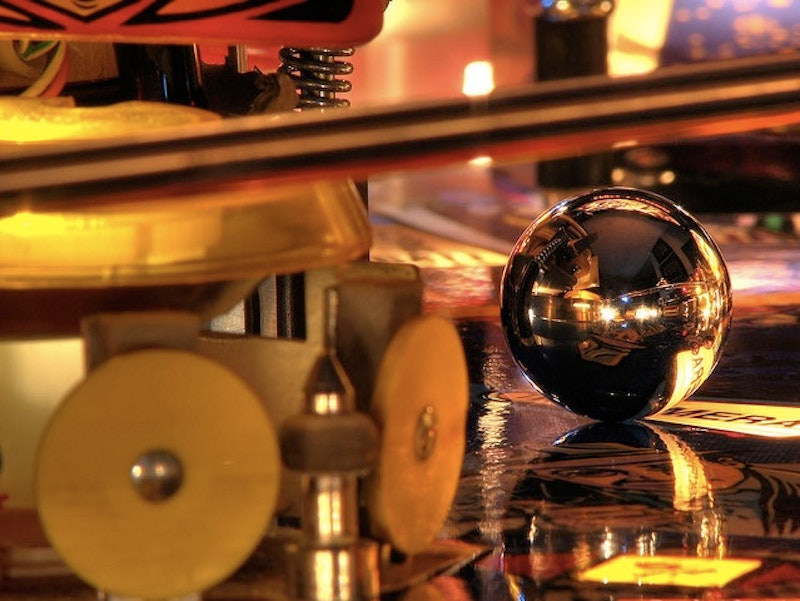 It would be a gross, selfish exaggeration if I made any proclamations about “America’s love of pinball” or a “resurgence of the silver ball,” but it’s undeniable that pinball has wandered back into a larger part of human consciousness lately, even if it hasn’t taken over the world again just yet. I, for one, welcome our electric invaders.

For me, the love of pinball comes directly from a love of physics. Coefficients of friction, the force of gravity and angular momentum all come together in a visceral, powerful way that video games helplessly try again and again to emulate, but cannot possibly capture. Given the choice between a perfectly rendered physics engine and the actual motion and interactivity of pinball parts, I’ll always choose the latter. Show me a pinball video game that will propel the ball with dangerous speed into the glass and I might give it all a second thought.

Sure, the part of the Lord of the Rings machine that looks like Aragorn’s sword unfailingly drops the ball in the wrong place and needs to be bent correctly, and the drop targets on my own Space Shuttle machine never seem to raise properly, but that’s just physics doing what physics does on a very small scale: the unexpected. The imperceptible factors that cause fluctuations in the reaction of the ball keep pinball interesting. A physics engine can only simulate interest in that critical “random” factor.

The growing attraction to pinball might just be a reaction to the hyper-real situations that video gaming attempts, resulting in an increasingly complex series of controls and camera angles that are uncomfortable, unwelcoming and overwhelming to many novice gamers. In an attempt to become more real, many video games have become simulators instead of retaining the fun of simply being a game. The Call of Duty series has a vast and dedicated following who dedicate themselves to the weird, communal “reality” of war, but as these things become increasingly advanced, where is the line between game and simulation actually drawn? Do simulations have the same audience as games? Can they embrace the same sense of fun, or does that remove them from their implied reality? I might lack the testosterone to get off on mowing down digital Nazis, but I’m a huge fan of scoring the golden gun in GoldenEye and executing completely unrealistic one-shot murders of my flailing, cubist opponents. Perhaps it’s a sense of fiction that makes a game truly a game.

Only one pinball company remains after a century-long legacy which saw contributions by many manufacturers. A wide selection of websites caters exclusively to supplying pinball collectors and repairmen with vintage or reproduction replacement parts. Despite the complexity of an average pinball machine, you can pull it apart, look at its guts and understand it. You can re-solder a burnt out resistor and feel like a man.

Historically, all manner of gaming has increased during periods of economic distress, so perhaps the heightened awareness of pinball can be partially attributed to that factor as well. Stern Pinball president Gary Stern was recently quoted as saying that the best thing that can possibly happen to pinball right now is to let the world know that it’s still around.

What I know for sure is this: there’s nothing else like pinball. It is all good things about sport miniaturized, and without the drunken bellowing and unwarranted sense of entitlement. It is bright and exciting. Embrace it, and maybe, just maybe, we’ll get machines that aren’t based on awful movies like Avatar.