The Pleasures of Perpetual Motion

They do not include consistent bathroom usage. 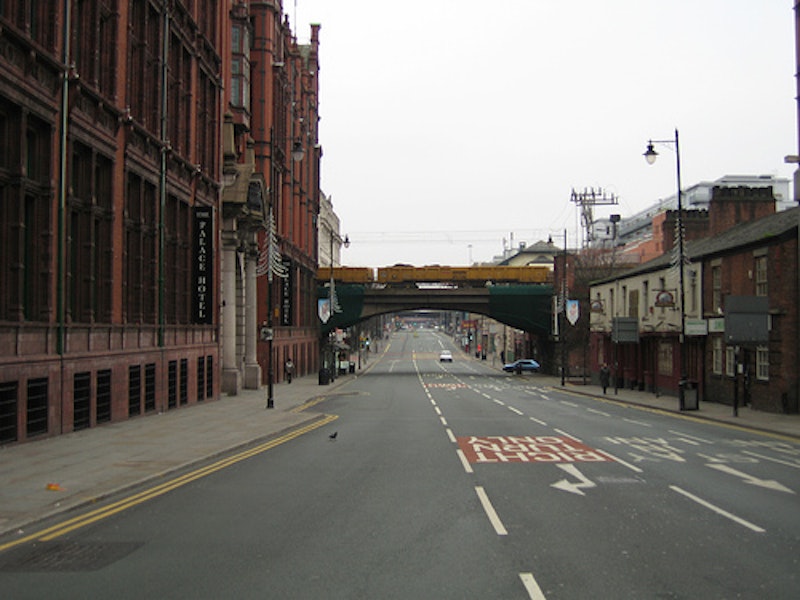 Travel makes every man think he's a philosopher. Though we live in an age of transnational highways, interconnected air routes and visa-free travel, still something about the act of crossing a border makes a tourist think himself John Bunyan, fit to pass judgment on nations and bestow wisdom to his sedentary brethren.

I am no more immune to this temptation than anyone else with a dog-eared guidebook in hand, frantically jotting notes in a leather-bound journal. And though I'm well aware that six weeks in Eastern Europe doesn't quite rank me with Marco Polo, still I can't resist succumbing to the most common travel-writer vice: forgoing a particular locale to dash off 1000 words on the experiences of movement itself.

Wandering quasi-aimlessly, one becomes almost equally concerned with the experience of transit as visiting actual attractions. This, I think, is the key distinction between the traveler and the tourist. If you have a week's vacation in Rome, you would inevitably pack your itinerary, carefully choosing your destinations and minimizing any transportation required, willing to pay a premium if it guarantees you a few extra hours in Vatican City or the Coliseum. But with a slim wallet and no return ticket your priorities are quite reversed—what are 12 hours in a journey of three or four months? Better to move slowly and save yourself a few Zloty.

That said, I've been spending a lot of time waiting for busses and trains to show up. At least in Eastern Europe, these two are virtually interchangeable in terms of speed, though the former have an edge in price, and often comfort as well; any dreams I had of whistling steam engines or the romance steel wheels on wooden tracks were quickly dashed after my first night in a second-class eight-seater, my head lodged tightly beneath the shoulder of a burly Dane.

But generally speaking, their ain't much distinction between getting somewhere by rail or tire. The train and bus stations tend to be located next to each other in most of the cities I've been, and both are populated by the same strain of singularly unpleasant employee, glaring suspiciously as you approach the ticket window, or frowning sullenly at the thought that—gods forefend—you might be approaching the information window in search of, wait for it, information!

The entire experience of navigating long-distance public transportation is an experience in itself, albeit an unpleasant one I'd prefer not endlessly repeating. Each interaction seems to go pretty much the same way: a friendly American smile plastered across my features, I say the name of my destination in the closest possible approximation of the native tongue. "Gdansk?" I exclaim once, repeating it 10 or 12 times with slight variations, hoping to somehow stumble upon the correct pronunciation. The scowling babushka waits until I've thoroughly humiliated myself before snarling the destination in what I assume is the legitimate manner, twisting the vowels unnaturally through yellowed teeth clenched below a dark adolescent's moustache. "Sure," I say, hoping I'm not buying a ticket for a similar-sounding town in the absolute opposite direction.

Linguistic difficulties, always serious, have become particularly fierce during my time in Poland, where the working populace seems to hold me personally responsible for the outcome of the Yalta conference, and where the natives speak a language which, though written in primarily in the Latin alphabet, in fact seems to more closely resemble Mandarin, or perhaps Martian. Here's a fun game for those playing along at home—pronounce the word Łódź. I'll wait. Nope, wrong. Sorry. Try again. Uh-uh. 0 for 2. Phonetically it's Woodge. Woodge. I don't blame the Poles; it's their language and they can twist it any way they feel like, but I think its high-time the English-speaking world got together and rechristened their maps to something vaguely approximating the actual sound of this word.

I've also been spending no few hours along the side of major highways with my thumb out. Hitchhiking is slow, unreliable, tiring, and ultimately not that inexpensive, since you often get to your destination too late to make a serious effort toward finding cheap accommodation, and have to make do with whatever budget hotel you can find at two o'clock in the morning. And waiting for a friendly motorist to take pity on you gets old real fast, watching the flood of passing traffic from an uncomfortable perch on a dusty shoulder, wondering how many spins of Johnny Cash's Greatest Hits you'll get before the battery on your iPod runs out. The most infuriating of these callous commuters are those who, not being content to simply drive past, actually make the effort to switch out of the right lane when they see you. Look, guy: you don't want to pick me up, no hard feelings. But let's not pretend that I'm willing to dash across six feet of pavement and leap onto the windshield of your '82 Yugo.

Still, there is an undeniable burst of joy that overcomes you when a car breaks ranks and you realize your travels are about to be forwarded by the kindness of a stranger. And sometimes your patron ends up being a fine fellow to pass a few hours with, like the Lithuanian who opened a leg of my journey by lighting up a blunt and telling me about his plans to turn his recently acquired beachfront mansion into a bed and breakfast (good luck!). Mostly though, these are in the minority, and language barriers or mutual disinterest make conversation, even over a couple of hundred kilometers, sporadic and difficult. Strangest are those drivers whom, having decided to give you a lift, proceed to offer nothing more than a furious glower, as if to damn you for taking up brief residence in the car they pulled over to the side of the highway to let you in.

Beyond the actual logistics of travel, hygiene and some of the body's basic functions have come to demand greater consideration than I have heretofore given them. Spend an hour or two searching the area around the Warsaw bus station for a toilet which does not induce physical nausea, and you begin to hope the next edition of Lonely Planet: Eastern Europe adds a "Shitting" section to its normal menu of "Sleeping/Eating/Drinking."

When not looking for decent places to crap I can often be found sitting on benches and affixing cheese to slices of black bread, an activity which you can well appreciate causes me no end of worry. The contents of my travel-sized bottle of Purell are rapidly diminishing, and the pleasures of alcohol-based cleaning products seem not to have made it to post-soviet Europe. I heat my pocketknife over a lighter and try not to fixate on getting dysentery on the road, a condition that, I suspect, would violate the fine print of the contract I have with my digestive system.

These collective concerns have all but replaced the existential neuroses that previously plagued my waking moments. What am I doing with my life, should I quit my job, is it time to throw in the towel and just go to law school-all these worries have fallen by the wayside, replaced with more immediate problems. Where am I going? How will I get there? Is it worth making a side-trip to Belarus just to see the inside of a police state? Why does the man behind me on this bus smell like a urinal? I mean, body-odor I could understand, but a urinal?

And this, honestly, is the most elemental pleasure provided by sustained movement. Standard-issue ennui fades quickly when the fulfillment of basic needs isn't guaranteed. More than seeing new places, more even than the adventure of travel itself, this heightened awareness of oneself as a physical being occupying a concrete spot in time and space, responsible for one's own survival but unencumbered by the possessions and duties forced upon you by settled existence is the gift Hermes bestows upon his adherents. In a month or two, of course, the trip will end, and I'll go back to biting my fingernails and harassing myself into an ulcer. But for now there is only the soothing hum of the bus, and the bad Polish road ahead of it, and the unfortunate tightness in my bowels.