The Visionary Art Museum takes a worldly view of American ideals in their new mega-exhibition Life, Liberty & the Pursuit of Happiness. 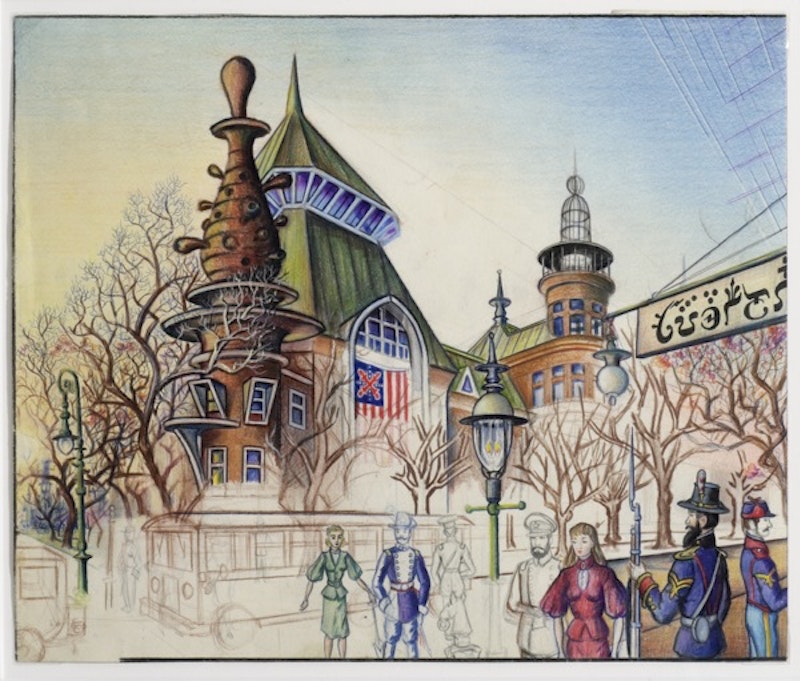 The American Visionary Art Museum has always been an improbable wonder: a giant, beautifully designed national museum in service of unknown artists and genuinely independent art. So it's little surprise that, even when an AVAM exhibition takes the relatively traditional title of Life, Liberty & the Pursuit of Happiness, the result is an eclectic gathering of wide-ranging talent, and a sprawling expansion of the title term's many implications. As curated by Roger Manley, a friend of the museum since its 1995 opening and a noted folklorist in his own right, LL&PH is a celebration of American ideals and an acknowledgement of those ideals' inherent universality.

Featuring a cast of roughly seven dozen artists, many first-time public showings, and an endless variety of media, the exhibit does have the same disorienting over-generousness that defines any AVAM exhibition. Without the barrage of liberty-related quotes along the walls, it might be hard to link the Bacon-meets-O'Keeffe paintings of former Saddam Hussein physician Ala Bashir with, say, the impeccably detailed handmade miniatures of Texas artist Richard McMahan, but the curators make the relation felt without overstating the matter. The Caribbean-born collagist Athlone Clarke evokes autobiography and social unrest, but under the circumstances it seems perfectly reasonable to turn the corner and confront the multi-paneled comic illustrations of a 19th-century Frenchman known only as Monsieur Gaulmier. We're meant to appreciate the similarities between political activism and boundary-pushing self-expression; Gaulmier's illustrations, depicting a Satan-assisted marriage, were the outsider art of his day, and their very survival is a testament of persistence not unlike the racially- and historically-minded work in the adjacent room.

As is customary for this museum, little marvels of persistence and self-expression abound: Dr. Charles Smith, who founded the African American Heritage Museum & Black Veterans Archive in Sheboygan, has lent some of his own painted-concrete blackface sculptures, which dominate a small corridor of the AVAM's second floor. It's a striking collection of two-foot-high characters from black history, with invitingly bright colors that contrast with the racist undertones of the coal-black faces. Elsewhere, we see the bizarre, sui generis autobiography of North Carolina artist Renaldo Kuhler, which takes the form of myriad illustrations of a fictional country called Rocaterrania. Kuhler is currently the 78-year-old scientific illustrator for the North Carolina State Museum of Natural History, and his work has a bleak realism to it despite his generally comics-based style. But the Rocaterrania idea is truly unique—Kohler has invented a fictitious country, populated by Eastern European immigrants, and given it a centuries-long backstory involving political turmoil and evolution. The AVAM has given two full walls over to his small drawings, and the scope of the project doesn't even really come into focus. But it's fascinating and obsessive, and has a purer emotional impact than almost anything else on display.

The themes of Life, Liberty & the Pursuit of Happiness are perhaps so wide-ranging that they barely matter; it's hard to differentiate between this exhibit's celebration of individualism and the more general impetus behind the museum as a whole. But by framing these ideals and works as explicitly political, Manley does indeed manage to grant this sprawling exhibition some coherence. He proudly claims patriotism for his own means, and forcefully asserts these artists' relation to the essential American beliefs. There's an us-vs.-them mentality to the exhibit and its marketing materials that, post-Obama, lends the whole thing a certain rejuvenated-liberal bent. This won't likely surprise anyone who's familiar with the Visionary Art Museum, and the only explicitly partisan gesture is one sculptor's boat made of trash, the "S.S. Palin." More often than not, Life, Liberty & the Pursuit of Happiness makes the welcome, apolitical observation that our country was founded on a belief in self-expression and inclusivity, and is further proof that this unique museum is a peculiar national treasure.