The Players and Their Masks

Inventing Anna and our country's obsession with grifters. 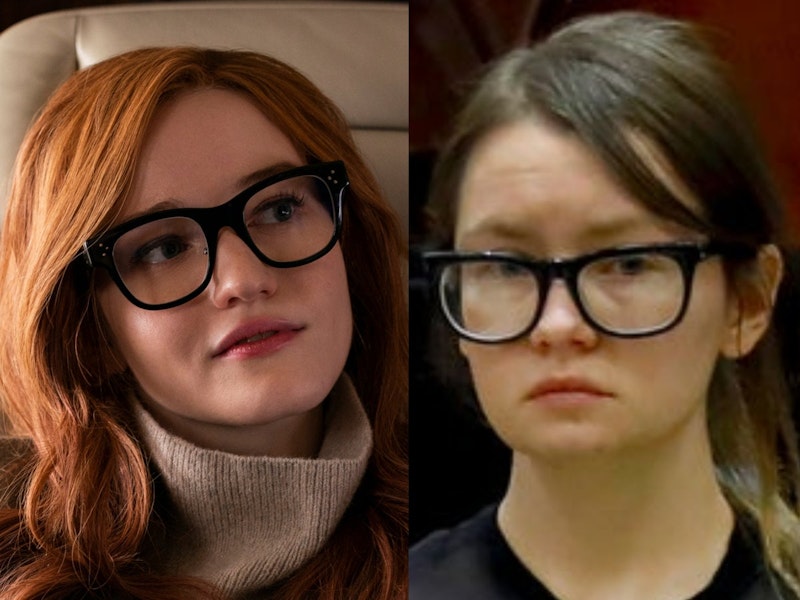 Why do we love to watch people get conned? This question nags at me as I finish Inventing Anna, the limited Netflix series based on the exploits of real-life New York City con artist Anna Sorokin (aka Anna Delvey), and move on to The Dropout, Hulu’s dramatic retelling of Elizabeth Holmes’ infamous Theranos startup. A little over a year after Trump left office, we should be exhausted by these narratives, if for no other reason than that they all, including Trump’s political career, follow more or less the same trajectory: the con artist uses their savvy, finesse, and wealth (or illusion of wealth) to fool a lot of important people—and maybe themselves—before a spectacular fall. We’ve seen this show already.

But we keep watching. America’s obsession with The Con Man dates back to at least the mid-1800s, when an anonymous New York Herald reporter coined the term “confidence man” to describe William Thompson, a well-dressed man who gained the trust of strangers by pretending to be an old acquaintance before asking for the “confidence” to hold on to their pocket watch, only to walk away and never return. Hardly an anomaly, Thompson was the type of man antebellum advice manuals like Henry Ward Beecher’s Seven Lectures to Young Men warned against, “a race … who live to corrupt, and live off the corruption which they make.” But by the late-1800s, as Karen Halttunen describes in Confidence Men and Painted Women: A Study of Middle-class Culture in America, 1830-1870, the confidence man had become a sort of aspirational figure, personified by the self-mythologizing, brash master of spectacle P.T. Barnum, signifying a massive shift in the United States from sentimental to theatrical culture.

Thompson served as one of the inspirations of Herman Melville’s The Confidence-Man: His Masquerade, a picaresque satire of America’s crumbling social compact that prefigures the new wave of Grift TV by over a century-and-a-half and still has more to say about our national pastime of deception and shell game commerce than all of these series combined. Which isn’t to say these shows don’t have their charms. Inventing Anna employs the framework of investigative journalism to tell Sorokin’s story, whose writer at the center, Vivian (played by Anna Chlumsky and modeled after New York journalist Jessica Pressler), is much more interesting to me than the show’s titular “Soho Grifter” (played by Julia Garner with an implacable accent that rests somewhere in the nexus between Tommy Wiseau and a deaf person). Chlumsky has one of the most expressive faces on television, and she gives the viewer at least one character to identify with in Vivian, someone whose obsession with Sorokin—how, with the help of major biographical revisions, a middle-class Russian immigrant was able to gain access to elite NYC circles—won’t pause for a newborn baby. Chlumsky’s eyes (wide, intense, piercing azure) are our own, always watching.

Each episode opens with a disclaimer, “This whole story is completely true. Except for all the parts that are totally made up.” This is the show’s winking acknowledgement that, to borrow from Anna’s lawyer (Arian Moayed, also excellent), “we are all Anna,” prone to embellishment when it suits us. I’m more interested in the ways in which we’re all Vivian, attracted to and repelled by liars and cheats like Anna in equal measures, knowingly entangling ourselves in webs of lies spun by unreliable narrators. If you think you’re immune to such entanglements, consider the last time you watched reality TV, or better yet, true crime documentaries. Netflix carries these in spades, including recent popular titles like The Tinder Swindler, Worst Roommate Ever and Bad Vegan. The thrill of these docs is the viewer’s simultaneous identification with and judgment of their subjects, swindlers and marks alike, and Vivian achieves the same thrill chasing down leads in Anna’s case, watching her life unfold in documents, second-hand accounts and social media. The preponderance of modern journalism devoted to the likes of Anna makes me wonder if David Foster Wallace’s characterization of fiction writers as a species of “oglers” might also be true of non-fiction writers, watching people “the way gapers slow down for car wrecks: they covet a vision of themselves as witnesses.”

That quote comes from the opening paragraph of “E Unibus Pluram: Television and US Fiction,” Wallace’s treatise on the relationship between watching TV and writing fiction. Wallace identifies irony as the primary lubricant in the well-oiled machine of Big Television, a machine that’s able to “capture and neutralize any attempt to change or even protest the attitudes of passive unease and cynicism TV requires of Audience in order to be commercially and psychologically viable at doses of several hours per day.” The same dynamic is at play almost 30 years later in the new landscape of Grift TV, where the viewer’s ironic distance from the material is measured in alternating waves of schadenfreude and vicarious consumerist wish fulfillment. These two entwining threads are what connect shows like Inventing Anna to The Dropout, and while taking enjoyment in watching a celebrity’s rise and fall is ancient, these series are novel in their diagnoses of the root causes behind their subjects’ oversized appetites for wealth and power, as well as our own appetites for watching them—or their generously-casted TV doubles—bite off more than they can chew.

Depending on the point the showrunners want to make in a given episode, each series positions its female protagonist’s duplicity as both understandable ethical maneuvering on the way to a shattered glass ceiling and an outright abandonment of ethics in the name of power-obsessed, managerial class faux-feminism. Inconsistency aside (per The Confidence-Man: “Inconsistency? Bah!”), the audience not only gets the pleasure of watching sociopaths dupe wealthy investors, businesspeople and socialites from the safety of its moral high ground, but also associate (even equate) this moral superiority with class consciousness and feminism. (In the words of another iconic TV sociopath, “It’s called having your cake and eating it too.”) This is the same beanbag of indulgence Wallace saw his fellow Gen Xers sinking into, a self-sustaining cycle of “escape, comfort, reassurance” updated for the millennials. We welcome these long-read TV adaptations as commentary on the way we live as passively as those Theranos investors accepted Holmes’ line of bullshit as a lucrative opportunity, and if those investors were blinded by dollar signs, it’s safe to say the people who ravenously consume Grift TV are also blinded by wealth (or the appearance thereof): the ultimate, unimpeachable credential.

This credential is clearly important to the titular subject of jeen-yuhs: A Kanye Trilogy, a three-part “documentary event” (as described in Netflix’s press release) about the iconic billionaire rap mogul. jeen-yuhs may seem like an odd inclusion for an essay about Grift TV. I respect Kanye a lot more than any of the characters in Inventing Anna or The Dropout, because his music offers the world—or offered, depending on one's evaluation of his MAGA-era output—something beautiful, which can’t be said of Sorokin, Holmes or the roster of former bank executives and war criminals on the Theranos board. Despite his friends affectionately calling him “con man” early in the series–sorry, documentary event–Kanye delivered on what he promised, further distinguishing him from the Sorokins and the Holmeses of the world.

jeen-yuhs also isn’t the blatant image rehab PR smokescreen one might expect from a celebrity in the midst of an ongoing public meltdown; it's a trickier, more elaborate con than that. The first two films depict Kanye (who served as music supervisor but didn’t get final approval on the trilogy) as an ambitious young producer and self-described narcissist doggedly pursuing his dream of being a rap star, which culminates in a triple Grammy win for his debut album, College Dropout. The third entry fast-forwards through the better part of his career as the project is sidelined by its subject’s meteoric popularity and penchant for tabloid controversy. In a hushed tone that mimics Tyrin Turner’s narration in Menace II Society, the film’s co-director and cameraman Coodie speaks over red carpet footage of his friend: “Kanye said he wasn’t ready for the world to see the real him. He told me he was acting now, playing a role, and that the media wanted to put their cameras on him.” You could say Kanye’s transition from backpack rap upstart to self-proclaimed God in some ways mirrors the Reconstruction-era shift from sentimental to theatrical that Halttunen writes about in her book, and you wouldn’t be wrong, but what jeen-yuhs illustrates about Kanye—from archival video of early raps to his performance of “Hey Mama” for his mother on Oprah to the massive, family affair listening party for The Life of Pablo—is that sentimentality and theatricality are concepts so thoroughly entwined in his mind that it’s unclear if he can discern one from the other.

In the 1923 book Confessions of a Confidence Man: A Handbook for Suckers, Edward H. Smith coined the term in-and-in to describe one of the final phases of the con in which, after a period of crisis called the hurrah, a conspirator adds money to the pot to legitimize the scheme. For the majority of the third installment, Coodie seems like both a co-perpetrator and victim of Kanye’s in-and-in. “You might say I miss the old Kanye,” Coodie narrates in the film’s closing moments, echoing the sentiments of many Kanye fans who sadly watched his schtick devolve into MAGA provocation and religious hucksterism. “But what I’m realizing now is that every part of Kanye makes him who he is.” The implication behind Coodie’s tautological defense of his friend (technically true of anyone) is that Kanye’s bullshit is part of who he is, and if we accept the documentary’s premise that he’s a sui generis genius and consummate rugged individualist (Kanye translates to “the only one,” which seems like both a prophecy and a curse), one could logically conclude that bullshit—whether simple rap braggadocio, interrupting an award show speech or the incendiary claim that black people chose their own enslavement—is an important and even necessary component of the rugged individualism our culture values.

Here's where the cynic might draw the facile conclusion that we’re all full of shit and have been since the days of Barnum (“we all liars”), but a more succinct takeaway from Grift TV might be that deception and fraud are so commonplace in our business practices and thoroughly woven into the fabric of 21st-century life (including our entertainment) that we’ve all internalized the mentality of both grifter and mark. This is true for the Grift TV audience and, lest you think I’m sparing myself any judgment, is especially true of the writers and critics who try to draw blood from these stones—to wring some zeitgeisty significance from cult of personality infomercials, voyeuristic true-crime docs and pseudo-Shakespearean ripped-from-the-headline dramas.

The real Shakespeare wrote, “All the world's a stage.” In the centuries since, we’ve become so enamored with this notion that we now willfully conflate the players with their masks. The difference couldn’t bother us less. The show must go on.