The Nick of Time

Beating the Christmas tree shortage, and a defense of Joseph Epstein. 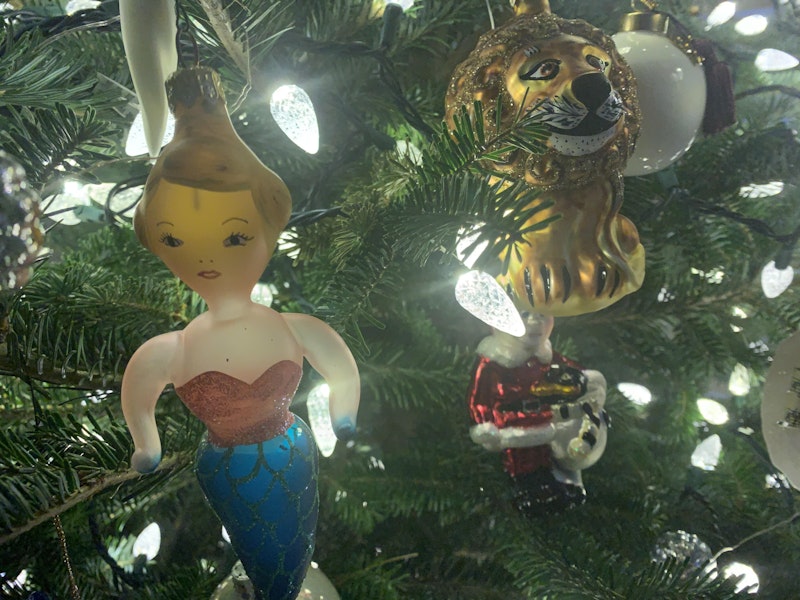 In 1969, Thunderclap Newman sang, “There’s something in the air.” Forty-one years later, I still smell it, even if not the “revolution” that Newman and most young adults of draft age dreamed about. (At 14, I loved the rhetoric of the song, and that of groups like Jefferson Airplane, but mostly in an adolescent suburban way. Somewhat impressionable, I figured that if Bob Dylan had dropped out of the rock culture and gone country, no way a revolution was happening.) What I smelled two weeks ago was far more prosaic—although fitting for the times—and that was a shortage of Christmas trees. The real ones, not the plastic jobs that Californians made popular in the 1970s.

Since we’ve lived in Baltimore, every year my son Booker and I visit Green Fields Nursery, my favorite independent small business in the city, pick out a pine or fir, and schedule a delivery date. (When we lived in Manhattan, it was less formal: my friend Alex would drive me and one or both of the kids and we’d buy a stunner of a tree on the West Side Highway. One time, toddler Booker took a stumble out of the car, got a gash on his head, and not surprisingly was bawling the entire way home to our co-op in Tribeca. Even a popsicle from the next-door bodega didn’t do the trick, and I dreaded the pandemonium upstairs when my wife saw Little Precious with a forehead caked with blood.)

In any case, my sniffer was right on the zeitgeist nose: we chose the tree on Dec. 5th, earliest ever, and a good thing, too, since they sold out the next day, as I was informed by the fellows who came the next week to rid the tree of excessive branches and clamp it in the stand. You know they were working around the clock, since one of the guys, upon entering the house, said in a flinty voice, “Can you put on a mask!” Fair enough, and I plucked one from my pocket.

According to a Dec. 14 Wall Street Journal article, my experience was common: more people are staying home this year and so demand, and price, is up. That figures, since most people I’ve spoken to in limited interactions the past two weeks—or by email—have all said they’re done with Christmas shopping, like me anticipating the worst from UPS, USPS and FedEx for deliveries. All well and good, although a bit boring, since I like the rush of scoring an excellent last-minute present for my wife or the kids; now it’d just be excessive.

Another monkey wrench. Booker and I bought several boxes of cool looking brightly-colored lights, only to get the hairy eyeball from my wife—she strings the lights, we trim the tree—when she read the fine print that the bulbs were potentially dangerous. Really, in 2020 who reads instructions on a box of Christmas lights? It’s not as if we're buying candle holders for the tree. Anyway, when Melissa went to an Ace Hardware store the other day to get new lights, they just had white ones, and she bought what remained.

As a rule, I’m not in favor of white lights: strikes me as too tidy, with a religious whiff even, and not at all congruous with our assortment of ornaments that date, in dwindling numbers, back to the 1930s. I’ve written about this before, but our tree (like many, but definitely not most, across the nation) tells a family story. The WWII plastic numbers (no glass during the war); gaudy balls from the 1950s; discount drooping snowflakes from the 1960s (my mom had a ritual of buying half-price Christmas paraphernalia on Dec. 26th); and so on, including a wide variety of ornaments from the trips Melissa and I took to Chile, Argentina, the Caribbean, Italy, Mexico, Hong Kong, Thailand, etc. But as my friend John Harris might admit, Mother Knows Best, for the white sparklies work, and since we’ve never gone this route before, why not?

A few thoughts about the ridiculous scrap that emerged on social media this past week about 83-year-old Joseph Epstein (whose writing I’ve enjoyed for many years) proposing in The Wall Street Journal that Jill Biden drop the pretentious “Dr.” from her name. Mrs. Biden isn’t a medical doctor, but received her honorific for study in education, nothing to sniff at, I’d suppose, but as Epstein notes, has she delivered a baby? Epstein and the Journal were targeted for days by scolds who spit up accusations of misogyny, male barbarism, sexism and demands that the editors responsible resign. This is the shape of social media post-Trump: all that bile (I especially got a kick out of detractors calling Trump “Donny” as if he would give a shit) must be transferred.

I’m certain that 95 percent of those expressing disgust didn’t read Epstein’s article, for, after all, it was 800 words and that’s a daunting task in this increasingly sub-literate culture. But those who do read Epstein, whether they agree with his more or less conservative views or not, know that his prose, while pointed, is also self-deprecating. He’s not Dave Barry—thank God, one is more than enough—but likes to mix his jabs with jokes.

Besides, making fun of the incoming First Lady’s pretensions isn’t new: among loads of others, I’ve referred to her, jocularly, as “Dr. Jill” in past columns, speculating that she could pull an Edith Wilson and run the government while her wobbly husband putters around the White House, at least until Kamala takes over.

Epstein’s on the tee right here: “The Ph.D. may once have held prestige, but that has been diminished by the erosion of seriousness and the relaxation of standards in university education generally, at any rate outside the sciences.”

I was glad to see that Paul Gigot, the Journal’s editor of the editorial pages (a long, and welcome, fixture at the paper), quickly defend—unlike his gutless counterparts at The New York Times—Epstein. He wrote on Monday: “If you disagree with Mr. Epstein, fair enough. Write a letter or shout your objections on Twitter. But these pages aren’t going to stop publishing provocative essays merely because they offend the new administration or the political censors in the media and academe.”

James Bennet, the Times’ sacrificial lamb over the Tom Cotton op-ed controversy—as if Cotton’s ghostwriter’s words were dwarfed by that paper’s stream of left-wing propaganda—probably read Gigot and thought, “Shit, it’d be nice to work for someone who has balls.”