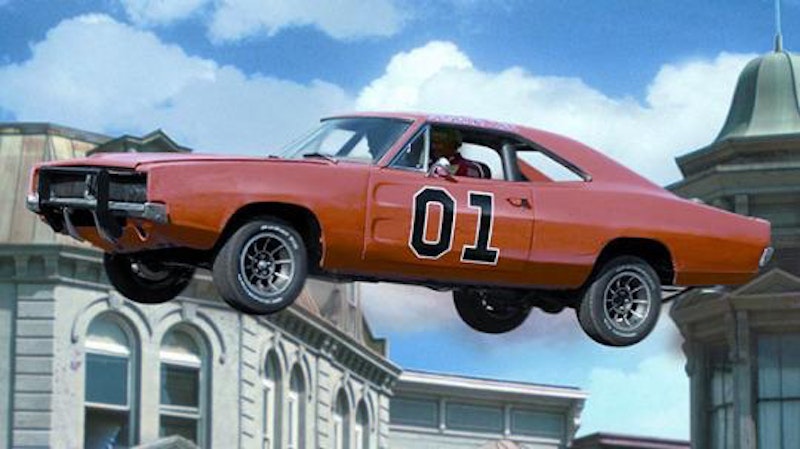 Look, I know what I said the other day regarding my personal animus for the Confederate flag; I stand by it. But learning that all future models of the General Lee—the iconic orange Dodge piloted by Bo and Luke Duke in 1980s television series The Dukes of Hazzard—will be shorn of the flag came as a shock. Now, it seems, the car’s roof will exist flag-free in the national imagination. On a delayed public justice level, there’s a certain intuitive sense to shellacking the Confederate flag: blazing symbol of racism, and failed, wrong-headed secession felled at last. Hazzard complicated this symbol enough, though, that PhotoShopping it out of the program’s legacy feels knee-jerk reactionary.

On Hazzard, the Confederate flag represented a live-and-let-live lawlessness—yet it also stood in for justice, anti-corruption, and the sort of vigilante heroism that’s indispensible when the local constabulary is in a fat cat’s pocket. This was the case in large part because Hazzard, which was essentially a prime-time kids’ show, never truly coarsened or complicated its main protagonists; they were basically playful, overgrown children themselves who more or less just wanted to help the strangers Boss Hogg and his minions were fixing to screw over via assorted, nefarious schemes. Hazzard didn’t have a whole lot of time for deep, probing moral conflicts beyond a generic good vs. bad dichotomy that fueled predictably awesome stunt cinematography and drawled Waylon Jennings narration.

When the show aired, I was in elementary school and didn’t have a comprehensive enough knowledge of American history to grasp the significance of Confederate flag; it was little more than an ornamental decal that complemented the General Lee’s orange, factory paint job perfectly. Eventually Matchbox versions of the car and Hogg’s white Cadillac found their way into the house, engaging at times in basement pursuits.

On one hand, there’s something unsettling about the easy insinuation of a symbol of oppression into childhood consumerist culture. On the other, Facebook’s full of retouched Hazzard photos where the Confederate flag has been replaced by a similarly controversial flag: the LGBT rainbow flag. The good news is that the General Lee looks awesome, either way.