What one freshman never forgot. 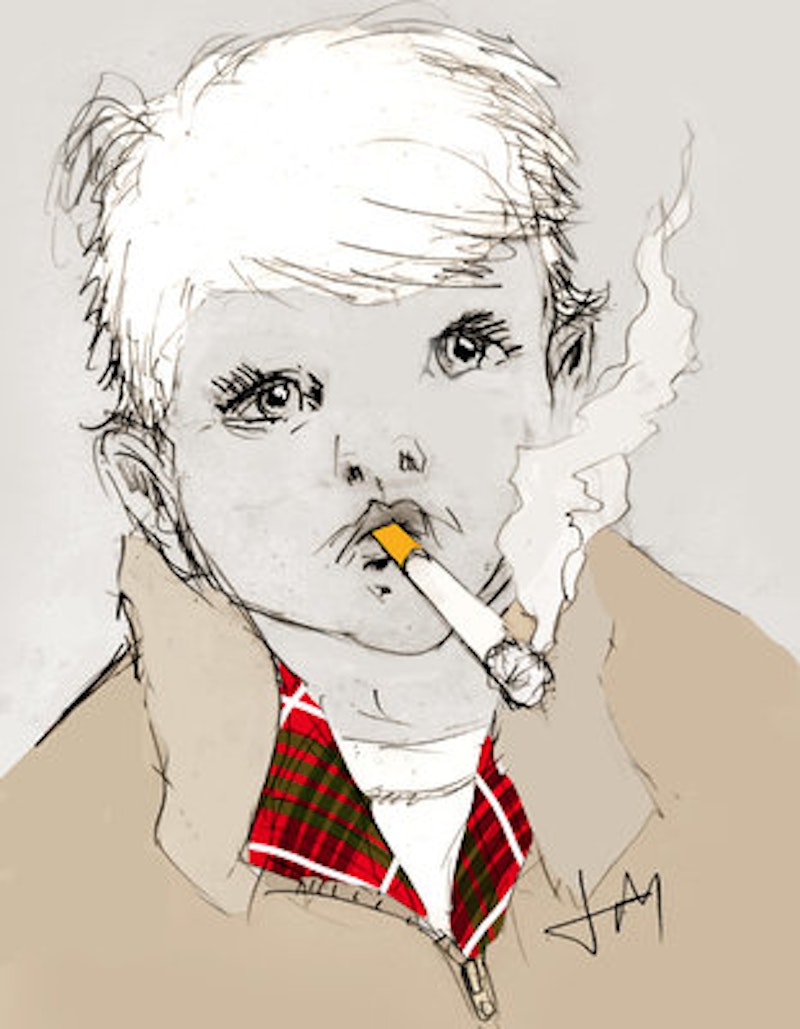 During my first giddy days of Boomer college, a particular freshman was rumored to be the Gerber Baby. I don’t know how it started, and by the 21st century, I’m not sure the Gerber Baby is any more familiar to SpliceToday readers than the Dionne Quintuplets. But back then, everybody knew the Gerber Baby as well as he or she knew Snap, Crackle and Pop. FYI, those are cartoon mascots for a vintage breakfast cereal known as Kellogg’s Rice Krispies. And FYI means For Your Information.

Yes, this smacks of period suburban myth. And if you know anything about iconic trademarks, you know that a reality-based Gerber Baby frosh would roughly be class of 1946. Created by Connecticut artist Dorothy Hope Smith in 1928, that cutest little baby face was entered in a contest sponsored by the Freemont Canning Company to promote the introduction of their new line, Gerber Strained Food. The cunning charcoal sketch won the competition and soon appeared on all Freemont Canning products. By 1941 the Gerber Baby went full archetypal, when the company changed its name to Gerber, ça suffit.

Never mind. In the fall of 1968, those of us who didn’t grow up gumming Beech Nut baby food were fed and re-fed Gerber products, as were our younger siblings. And Brand Studies was not yet typically part of high school curricula.

Short story, our college class of 1972 ate this rumor up.

Best of all, the rumored Gerber Baby was prematurely gray—crazy prematurely gray, almost white hair cut kinda Jack Kennedy style. I can see him now at dining hall breakfast, wearing a khaki Baracuta jacket against an early September chill, pushing his tray down the cafeteria line, bystanders surreptitiously monitoring his deliberation between the popovers and the eggs suspended in milky lukewarm water. I think I might’ve whispered something about strained peas to my new buddy from Long Island, just ahead of me in queue.

Many years after, I questioned that buddy about the Gerber Baby freshman and he denied any recollection, although he can be given to summary dismissals for summary dismissals’ sake, so I never accepted that as his final answer. What’s more, I’m pretty good with long-term memory and I recall discussing the matter with a mutual college chum a decade after graduation, so I’m sticking to my story.

Some people I knew had classes with the Gerber Baby, but he reportedly didn’t say much. He acquired no particular reputation beyond being that baby and evidenced no unusual behavior. Often sported the Baracuta jacket, but ixnay the diapers. No crawling. No cooing. Yes, the Gerber Baby smoked filter cigarettes. I recall coincidentally walking past the main desk of the student union, where candy and cigarettes were sold, and spotting the Gerber Baby, purchasing a pack of steams and getting change from a dollar bill.

I’ve no clear memory of his brand, but my mind’s eye sees red, which most likely means Winston or Marlboro—to be sure, nothing subtly out of phase as L&Ms, or outright preposterous as English Ovals. Finally, I witnessed him smoking and drinking black coffee in the downstairs student union cafe not long after I cut through on my way to Freshman English.

Was the Gerber Baby aware of his celebrity? For a brief window, when our gang still sat around one or another’s dorm room and passed witless time reviewing a staple-bound collection of freshman photos printed and distributed to new students, the Gerber Baby’s thumbnail snapshot stood out enough to generate speculation about his age. Had he been to Vietnam? Was he on the GI Bill? And that was that. The Gerber Baby’s celebrity waned as quickly as it waxed.

Was our classmate Gerber Baby a one-off hoax, locally fabricated and specifically tied to his premature gray? Or did he manifest something larger? Like what? I dunno, like, maybe an organic and pervasive intercollegiate myth, somehow engendered by the madness of crowds and spoofing underclassmen since the late 1940s. You know, that kind of thing.

Mind you, I’m loath to concede the phenomenon was homegrown disinformation. That’s unacceptable. I prefer to believe this 1968 Gerber Baby rumor was societally inevitable.

Perhaps it had something do with two generations’ cumulative exposure to a single picture on a virtually infinite number of squat glass jars. While not exactly a child from the Village of the Damned, the original Gerber Baby had a look lean and hungry and vaguely unsettling, especially if, for an extended period of time, it stared you down as an infant, confined in your high chair.

On the other hand, the Freshman Gerber Baby’s appearance and deportment were altogether benign.

If I knew such a person, I’m not sure I could tell such a person that word on the street is… well, you know. I mean, being the Gerber Baby is one of those things you can’t deny. No matter how little you protest, you protest too much. So let it slide, let it ride Charley Pride and the whole thing blows over in a month or so. Either by design or default, that was the upshot best I can recall.

Does any of this sound familiar to you? Come on. I’m not talking albino sewer alligators. If you’re of a certain age, you know that face. And if you’re not yet that certain age, well, it’s time you asked your parents about that Gerber Baby. Ask your parents, go ahead.

Ask them if they heard he walked among us. That’s what I heard. I’m not saying the Gerber Baby walked around like he owned the place. Nah, just to class, back to the dorm, over to the library and stuff. Just like everybody else.