David Wojnarowicz's Fire In My Belly and the ensuing controversy. 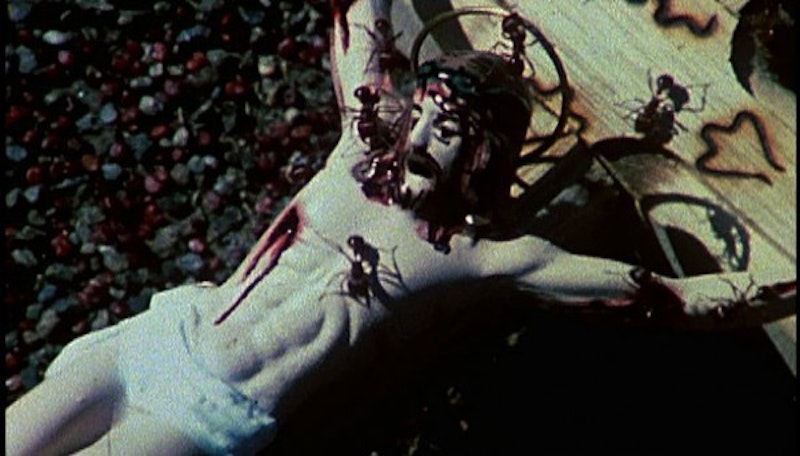 In case you don’t pay attention to arts news, Fire In My Belly has been at the center of a censorship brouhaha. It was being shown at the National Portrait Gallery as part of  the exhibition “Hide/Seek: Difference and Desire in American Portraiture,” focusing on the work of gay artists. The late David Wojnarowicz was a particularly outspoken critic of the Catholic church’s response to the AIDS crisis, and his film includes images of ants crawling on a crucifix. The Catholic League and Republican Rep. John Boehner themselves crawled out of the decaying corpse of Jesse Helms, reared up on their jointed legs, waved their antennae, and performed their God-given function of vomiting out bits of partially masticated indignation to be consumed by their hatchlings/adoring public. Faced with this nightmarish vision, Martin Sullivan, director of the Smithsonian's National Portrait Gallery, caved and writhed on the floor like a spineless jelly. Which is to say, the video was removed.

Subsequently, in a probably hopeless but nonetheless laudatory effort to beat the devil, or at least shame the abject functionaries, museums around the country have been showing the film. One of those screening it is the Smart Museum of the University of Chicago, just a couple of blocks from my home. The Museum was showing two different “versions” of the silent film—a 13-minute unfinished cut, and a seven-minute excerpt that was only discovered posthumously. So I went to check them both out on the big screen (the film in various forms can also be seen on the Internet of course).

The big screen turns out to have been an important part of the experience. When I came out, the gallery attendant commented that I looked shocked. I smiled queasily. “No,” I said. “It’s just the hand-held camera.  It makes me nauseous.” And other than that, I was mostly indifferent. The 13-minute version in particular was underwhelming. No ant-covered crucifixes here: instead, this was simply a collage of more-or-less interesting scenes from Wojnarowicz’s trip to Mexico. A boy in the street blowing fire, some circus performers, sugar skulls, Aztec carvings, a cock fight inevitably juxtaposed with a wrestling match. Or, in other words —look!  Exotic Mexicans! They are colorful and alien, entertaining and slightly ominous! Also (the wall text helpfully informed me) they are spiritual.

The seven-minute excerpt (or an edited version thereof) was the bit they showed at the portrait gallery to stir up all the ruckus—and it was certainly punchier. The images from Mexico were intercut with Wojnarowicz sewing together a piece of bread, sewing together his lips, disrobing under strobe lights and showing us his penis—and also, of course, with the infamous crucifix and ants. This is the highlight of the film; the critters crawling about on miniature Jesus look enormous, and viscerally disturbing. But the crucifixion is supposed to be disturbing, surely—the effect here isn’t so much blasphemous as oddly reverent, the ants emphasizing Jesus’ vulnerability and humanity. Wojnarowicz doesn’t seem to be indicting Jesus so much as identifying with him, especially when we watch him thread a bloody needle through his own lips.

Of course, identifying with Jesus is in some ways even more charged than attacking him. I suspect the Catholic League considers it sacrilegious for a gay man to link his own persecution and suffering to that of Christ. Wojnarowicz is clearly playing on that. He’s trying to shake people up—and to speak out against the church, as his sometimes collaborator James Romberger noted in a post on the blog I edit.

All of which ends up being more interesting in theory than in execution. I mean, I can certainly appreciate the irony of Wojnarowicz’s bloody silencing in the context of  the recent censorship. But sewing your lips together as a metaphor for the AIDS crisis? It just seems kind of obvious.

There’s something pretty blatant about being nailed to a cross too, of course. Religion has an aesthetic element, but it plays by somewhat different rules. Wojnarowicz is trying to express a spiritual desire and a spiritual disgust in the face of personal and communal tragedy, grief, and anger. I can appreciate that on some level—but mostly I look at it and what I see is ethnic appropriation, clichés, and some moderately interesting images.

On the other hand, Boehner looks at it (or hears about it) and sees an insupportable attack on his faith. And I can’t help but think that Wojnarowicz would in some sense be happier with Boehner’s reaction than with mine. The censors, after all, are acknowledging almost despite themselves that Fire In My Belly has something devastating to say about art and religion. Whereas for me, it just makes me a little sea-sick.