Sometimes bigger is better, at least while it's happening. 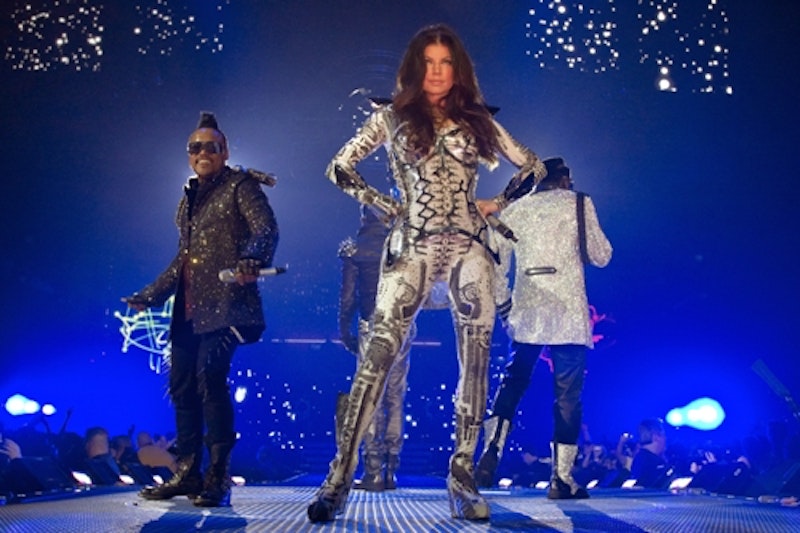 In his review of Kanye West’s My Beautiful Dark Twisted Fantasy, Rolling Stone’s Rob Sheffield made a very interesting point. Fantasy, Sheffield wrote, is “a rock-star manifesto for a downsizing world, adding that “at a time when we all get hectored about lowering our expectations, surrendering our attention spans, settling for less, West wants us to demand more.”
The Black Eyed Peas aren’t afforded a fraction of the critical handjobs, plaudits, and over-analysis West enjoys, but a similar argument could be made for their stage shows, because they are fucking immense, and they’ve been immense for a good while now. Think of it this way: on a recent Sunday evening in Texas, they performed a live mini-suite of their greatest hits before millions of viewers worldwide; before and after, some dudes in uniforms collided under lights when some funny Doritos and Pepsi commercials weren’t playing.

There is no subtlety in a Black Eyed Peas live performance. There is no menace. There is no guile, no slow-burn, no self-congratulatory referential fake-out. There is jumping, and jerky, sub-Kraftwerk freeze-poses, and subbing for Explicit Lyrics, and what seems like genuine enthusiasm, and some fervent enough dancing on the part of will.i.am, Fergie, apl.de.ap, and Taboo. They all look patently ridiculous, a cracked-out art designer’s mash-up of Michael Jackson pomp, 28th century military apparel, Times Square LCD-screen tech, Lower East Side dementia, and Aeon Flux; when I’ve seen them pull this act on live TV in the past, they’ve been surrounded by body-suit back-up dancers who were seemingly jumped by chess boards en route to the studio.

The Peas’ Super Bowl halftime show somehow managed to explode this rubric to Olympic-Opening-Ceremonies-In-China proportions, relatively speaking. First, they were at the Super Bowl, which is epic anyway. Second, the Peas—or their management, or whoever—opted to do away with the long-standing Super Bowl halftime tradition of crowding the stage with laminate-flashing trust-fund lamestains, instead trucking in dancers in white bodysuits with lights of various colors to lend what was happening on stage extra verve and heft, to create the impression that all of this shit was happening in outer space or at least in the middle of a desert somewhere. They thrashed, they flailed, they projected “LOVE” in giant red disco letters and hearts and luminous green arrows and flashing streaks and geometric diamonds of white into the ether—and best of all, they spared us two dozen rapturous audience camera shots.

Onstage, there were kids battering marching drums and wailing on horns, and drum majors-cum-African-American steppers kicking it; silver body-suited dancers wearing glowing boxes on their heads, so they looked like living modernist lamps; and the Peas—Fergie in blinged out warrior-princess bodice, will.i.am with some sort of clear hair helmet—plasticine post-digital action figures riffling through pop’s greatest populist hits. Smoke machines. Light-saturation baths. Slash emerged to jam on “Sweet Child of Mine” with Fergie; Usher and an entourage of dancers descended from heaven to strut along to “OMG” while will.i.am played hype man. As for their own catalogue, if there’s been a Peas song you’ve heard and loathed at any point the past decade, they probably whipped through at least 30 seconds of it—including the ones where they geek out on the Pulp Fiction and Dirty Dancing soundtracks, how all culturally-inclusive can you get—wrapped up in pleas to the president for increases in education funding and a sort of blanket appeal for world peace and not-quite-Lady-Gaga-scale weirdness.

Thousands of condemnations of the Peas’ pandering, electro-synth vacuity have been penned; I’m not going to add to or counter them, any more than I’m going to rush to iTunes to download The Beginning. And yet there’s something to be said, something special, about this group’s utter and total willingness to throw itself out there, its unabashed eagerness for adoration, its indifference to critical ridicule, the stunning shock ’n’ awe scale of its performances. “I Gotta Feeling” will always be pap, but for a few minutes there, that single—elements of which opened and closed the halftime-show onslaught—was the only thing that mattered. That, and which other surprise guests waiting in the wings. Bun B? Alanis Morrisette? Trae? West himself? The answer, of course, was none of the above and no one else, but the vibe of full-scale surrealism was such that the late Johnny Cash could’ve ambled out to make out with Fergie and it wouldn’t have been much of a surprise. And it would have been awesome.