The Edge of Hell

On the work of heavy metal performance artist Jon-Mikl Thor. 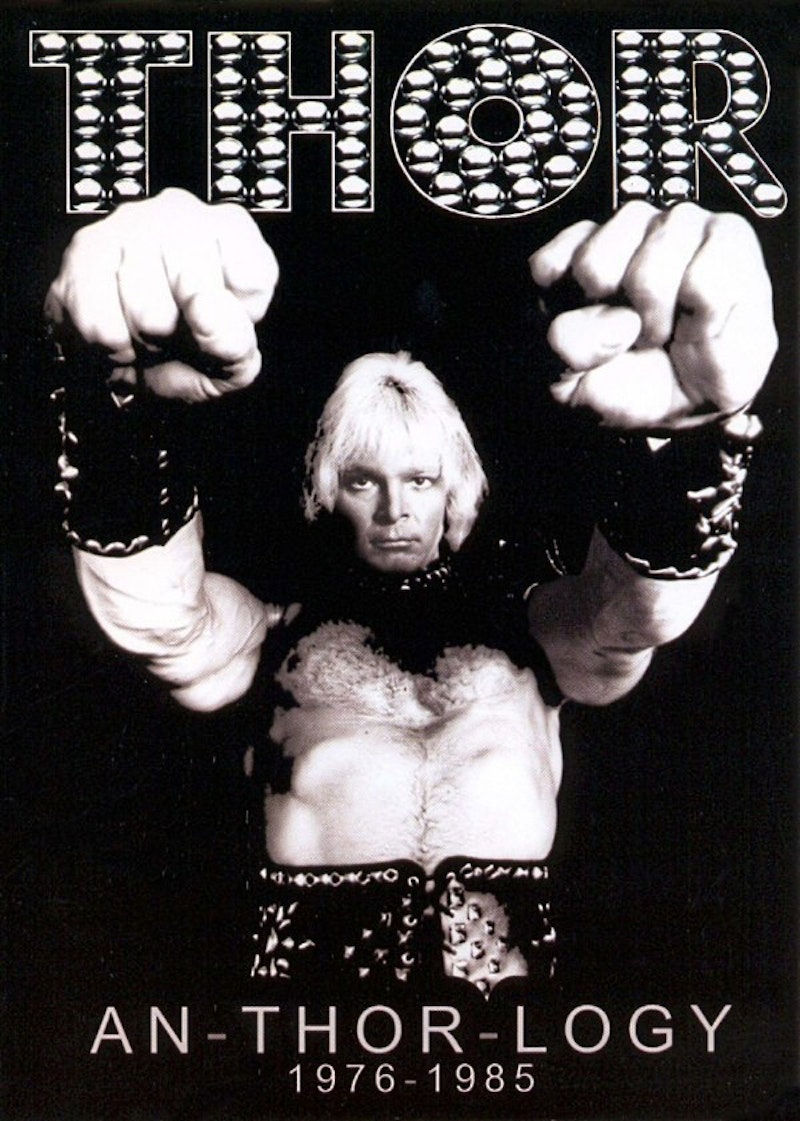 Life-threatening sacrifices only become important when their aftereffects reverberate beyond conventional morality. The self-imposed physical challenges of heavy metal performance artist Jon-Mikl Thor provide perfect examples of necessary sacrifice. His work was driven by an organic reaction to ever-present harmonies of sound and movement, invisible mysticism and physical extremes, ancient mythology and the need to transcend any desperate pursuit of comfort or stability. The 1970s/80s performance footage, TV appearances, and music videos featuring Thor demonstrate the mystery, magic, and sensuality of this Canadian metal god’s obscure conceptual muse.

"Anger"—This is the best heavy metal video ever made. Ignore the bullshit criticism. This 1983 clip is a great starting point for those unfamiliar with Canada’s fist-pumping barbarian superhero. “Anger” exists at the junction of shabby LARP-style goofiness and a Bronze Age saga. Low-production values and a stark lack of realism energize the short’s wild sword and sorcery plot, a summary of the artist’s emotional commitment to folklore and comic book narratives. The video’s aesthetic schizophrenia is Thor’s way of reminding viewers of the mundanity that inspires creativity and idealism.

An-THOR-logy—If “Anger” made you hungry for an overdose of Thor-ian mayhem, the next logical step is 90 minutes in a dark room with An-THOR-logy, the best, most comprehensive collection of vintage Thor footage currently available. From his mid-1970s days as a glam shocker covering Sweet’s “Action” on a Merv Griffin episode shot live in Vegas, to his late-70s hard rock experiments (conducted at low-rent nightclubs throughout urban Canada), to his rebirth as a NWOBHM star, it’s all here in washed-out VHS glory.

Thor’s appearances on TV shows aimed at children provide some high points, including cameos and musical segments on New Jersey cult classic The Uncle Floyd Show and Channel 72, a loopy British program that resembles what might happen if Tim & Eric tried to create something family-friendly. Here Thor’s versatility shines more vividly than any of the other clips. His muscle-bound splendor inhabits a place of hilarious randomness when ripped from the macho context of metal culture. The best part about that is that Thor is 100 percent in on the gag. These clips display the performer's effortless ability to assimilate his weird approach into a wide variety of entertainment experiences.

On the opposite end of the An-THOR-logy’s spectrum is a disturbing piece of footage from an early-1980s concert where the blond thunder god gets a pair of sledge hammer-wielding/ski masked thugs (presumably actors in costume) to rush the stage and smash cinder blocks on his chest. Poetic justice makes this some of the most distorted footage featured. The cheap video camera shoots from one semi-distant shaky angle in the audience. Crushing heavy metal music blasts the camera’s tiny microphone to slivers. Every note and drum beat sounds like paper being crumpled and thrown into a trash can. The intensity of the white noise and the gasping audience rises as Thor returns to his feet, covered in dust and rock. He engages his attackers in a vigorous WWE-style battle despite the fact that the insane stunt probably incurred a couple broken ribs. Real pain and escapist pleasure, imaginary conflict and visceral destruction unite in Thor’s self-less dedication to spectacle.

Rock’n’Roll Nightmare (aka The Edge of Hell)—An early direct-to-video release, Rock’n’Roll Nightmare was written and produced by Thor in 1987. It’s most notable for being one of the few non-porn films to feature Thor’s legendary paramour/band mate Rusty Hamilton, aka Cherry Bomb. It’s not a horrible movie, but it’s as close as the golden god came to unleashing a dud. Goofy special effects, hilariously lethargic fight choreography, a script that probably wasn’t memorized by any of the actors, high-energy music sequences, and tedious soft-core porn scenes are slapped together with a finesse that only a metal crazed 13-year-old could love. The film’s jarring end brings a surprise twist that plays like something out of Holy Mountain. It upends the lurid/chaotic mood that permeates throughout the rest of this potboiler. Thor knew his audience, but reaching them via film production was a challenge that he wasn’t quite up to. Nonetheless, if you love the “Anger” video and An-THOR-logy then Rock’n’Roll Nightmare won’t waste your time.

Zombie Nightmare—Thor’s greatest acting performance came in this psychotronic cheapie. Lensed in Canada and written by Rock’N’Roll Nightmare director John Fasano, Zombie Nightmare is an anti-racist horror flick bursting with high camp madness. The 1960s Batman star Adam West gives a top-notch performance as a sleaze bag cop on a power trip. Tia Carrere and a young supporting cast push the 1980s punks-vs.-metal heads conflict to the extreme. Action-packed camera work and car chase scenes paired with cuts from Girlschool, Motorhead, and Thor give this brief occult outburst an atmosphere that recalls Michael Mann’s stylized crime films more than any genre work. Thor summarizes his own weird place in pop mythology by playing a character whose noble purpose can only fuel the shocking nature of his actions.