The Death of the American Arcade 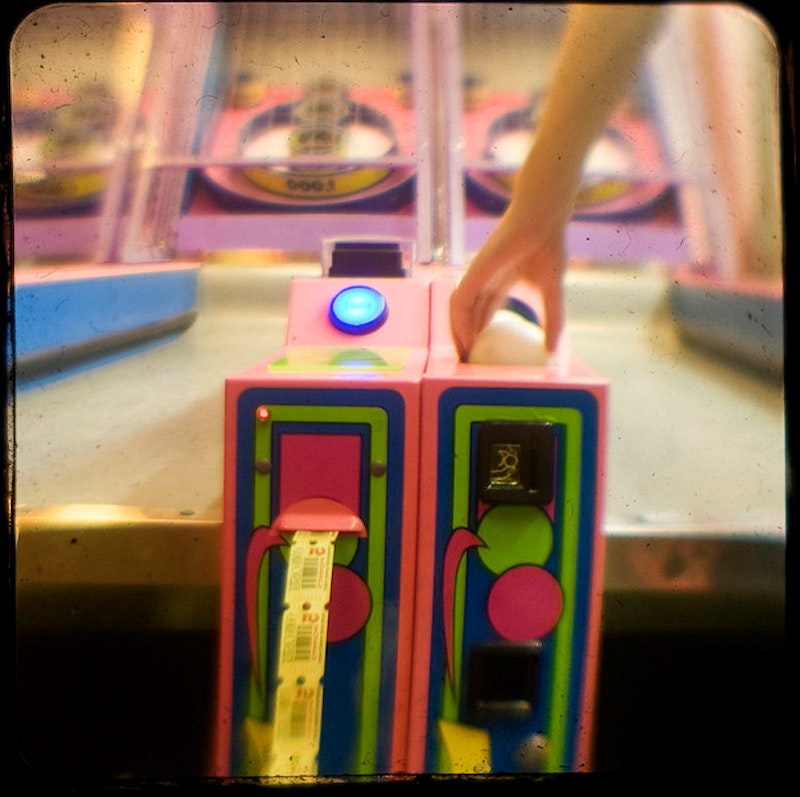 The endless vistas of beeping and glowing arcades were always the best part about visiting the Jersey Shore - and we all know that there’s little good about that area in general unless you’re really into reasons to kill yourself. Up and down the boardwalks, tucked away in secret buildings behind the general store, or quietly beckoning me from the Ames across town, arcades were my objects of desire. I’d ride my bike across Sea Isle City with pockets full of quarters and play video games until there was nothing left. Sure, it was money that dissipated into the ether with no physical reward in return, but all of these countless years later, it feels like the experience rewarded me with something genuinely present. Those moments as one of the X-Men or a Ninja Turtle, in between diving into the waves at the beach, feel infinite.

Real arcade games aren’t predicated on skill as much as they are on how much money you’re willing to pump into them. With enough quarters, you can fire enough bullets to take out that last boss or obtain enough pinballs to shoot the right ramp, whether or not you have any modicum of skill. Of course, talent will you a lot of money, but the listing of high scores doesn’t count how many quarters you’ve just dedicated to your victory. Insert your own metaphor for life in general right about now.

There was a certain awesomeness to beating Golden Axe in the arcade alongside my uncle, or playing some forgotten Dungeons & Dragons game in Wildwood and being aided by a complete stranger against an onslaught of orcs or dragons or bugbears, or being completely unable to navigate the waters of Toobin’, or snagging the enormous diamond on the Bubble Bobble machine tucked away in the back of the local pizza place. When I found a decrepit Simpsons machine wedged into a closet at the local Italian restaurant this year, screen flickering and every button label peeled away long ago, I could barley enjoy my meal as the loose change became hot in my pocket. Sure, Marge was broken and Lida couldn’t jump, but Homer was always the most fun one to play anyhow.

It’s not as if we played these games in public because of any sense of monkey-faced Billy Mitchell narcissism -- they were simply the best games in existence on a technological level. During the glory days of the arcade, the home gaming was stalled at 8 bits and the enormous computers housed in these arcade machines could run more complex games than what the average person had at home. As technology evolved, TVs grew larger and computers became smaller and less expensive, and the compact home console began to dwarf what you could find by actually leaving the house. Technology acting as a physically isolating force isn’t a revelation. As a direct result of tech, arcades began to change, like any business must in accommodation to the whims of the universe. This is also why we now have “apple fries."

By last year, I had a very difficult time finding video games or pinball machines in any of the familiar New Jersey arcades. Every arcade was still standing, but they’d completely repurposed themselves to cater to the weird avarice of youth. Instead of finding purpose in fun, the average arcade is now an unrepentant baby gambling parlor, urging kids to drop quarters into machines with the goal of earning tokens and coupons which can be redeemed for scratchy spider rings, rubber ninjas and stickers. A glorious, sexy wall offers up video game systems, iPods and other fabulous prizes for the equivalent of a few hundred dollars’ worth of concerted effort. Somewhere, someone is calculating how much investment the average kid makes in obtaining a single token, and I imagine this person is supernaturally greasy and unpleasant, obese from the gluttonous consumption of youthful dreams. These token systems always existed, but not to the exclusion of actual games.

We have to acknowledge that video gaming is shifting back towards being a social experience, encouraging groups of people to play Rock Band together, to get up and move, and to remotely join campaigns with people across the world -- something which the arcade couldn’t offer, and without the danger of a swift-fingered brat swiping your money off of the console, but the transition between playing for the love of playing and making wagers for cheap toys (or the online equivalent, unlocking trophies) is a disconcerting one. Arcade machines have been relegated to museums: Beacon, NY, Seattle or Toledo, and a few in between.

A dedicated pinball part supply shop which exists in Poughkeepsie, NY is a hopeful presence, but an arcade business model which offers games otherwise unattainable at home, and with no expectation of a physical reward in return for efforts, would seem like a smart way to go. Unless we’ve genuinely experienced an emotional shift towards isolation as a species, the thrill of a new game should be enough to draw us out into the harsh light of day. Right?