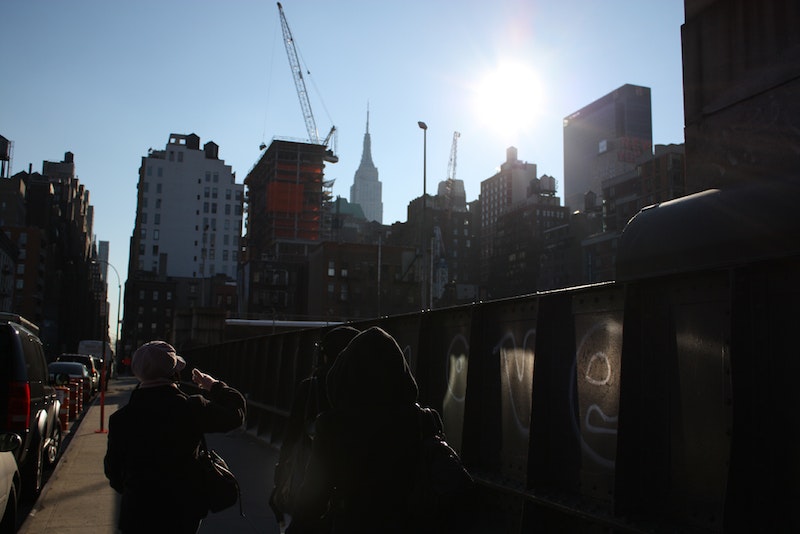 The thing I love most about living in New York is the “New York Moment.” You never know when one’s going to hit, and they always feel so random, out of thin air. New York Moments are those ridiculous, chance encounters you have with a friend, an ex, or a fuck buddy you haven’t seen in months, maybe even years, possibly by choice. But then—surprise!—the New York Moment creeps in and brings you two back into touch and everything is right with the world.

I’m sure other cities have similar moments, I’ve just never heard of a “Chicago Moment,” so maybe somebody can school me. What makes it a New York Moment, though, is that the city is so massive and there are millions of places to be, with millions of people going where they need to go. So to run into somebody you haven’t seen in a totally random place is what makes the New York Moment really exciting.

A few weeks ago I was heading back to Williamsburg on the L train, and as soon as we hit Union Square, poof: my friend Christophe (who I hadn’t seen in years) materializes right next to me. I mean! What’s the likelihood that out of the millions of people who ride the subway everyday and out all the L trains that roll past every 5 minutes and that out of all the 10 cars composing one train, what’s the likelihood that at exactly 7:52pm Christophe would get on the precise train I’m in and sit down immediately to my right? We chit and chat, and as soon as we both escape the train at Bedford, that’s when we both run into our mutual friend Tyler going into the subway, who neither of us had seen in a really long time.

In a place as large and impersonal as New York, chance encounters like these make the day go round. But what happens when you have New York Moments with people you don’t even know, when you keep seeing people you haven’t officially met?

There’s this girl I always see when I go to my regular Brooklyn coffee shop. She’s really tall and pretty in an odd sort of way, and always sits there with her espresso, reading some sort of vintage manuscript. From what I can tell, I think she has a giant collection of old books. Anyway. I see her everyday I’m there. I go, she goes. Then I discovered that she works at the American Apparel I go to in the neighborhood, so then I’m like, Okay, she works in the neighborhood. That’s cool. Everything’s cool. Then just yesterday I’m walking towards the West Village on a random itty-bitty side street and there she goes, long legs, big hair and all, so now I’m really starting to freak out because every time I go somewhere, she’s right there (amazing).

And at the same coffee shop there’s a dude (cute) who’s the barista, and I think he goes to a conservatory. I always see him on the L and even the G trains, or I see him walking up and down Bedford Avenue, or at my grocery store, or walking up and down the street I live on, or at the donut place I go to almost every morning. So when I’m cooking dinner the other night and realize I’m in dire need of Soy Sauce, at 8:51pm I roll out to the bodega to pick some up. Ta-daa—guess who’s there!

The funniest thing about these New York Moments is that even though we keep seeing each other, keep entering each other’s personal vortices, everybody keeps ignoring everybody. We just go-cart right past one other, tunnel vision fully on. I’m looking right at you but I do not see you. So now I’m wondering at what point is it okay to just go ahead and break down the fourth wall? “Hi, I keep seeing you everywhere I go, which I guess means you’re really hip. So let’s be BFFs.” Or is that a little bit too sketchy?

No matter which city you live in, New York, L.A., Chicago, or Nashville, you’re bound to go to the same groceries, the same coffee shops, the same gas stations, the same bookstores all the time with the same people. Seeing a familiar face in the places you go means that you have at least one thing in common with them. And that’s grounds enough to strike up a friendly conversation. You never know—that person could become a close friend, or maybe a concert buddy. Sometimes I think that modern life is like a train station: so full of arrivals and departures, thousands of different stories, swiftly moving bodies all headed in a single direction, and yet all crossing the same paths. In the midst of all the hustle and bustle, it’s nice to slow down and take a step back. Because sometimes, you just never know.