The Dance of Young Hearts 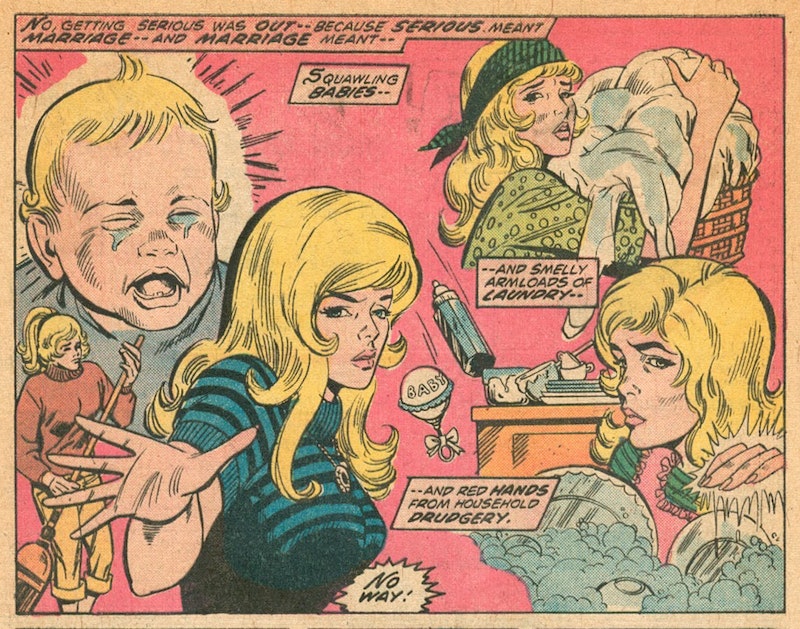 Long ago, in a far away land of bell bottoms and hot pants, of paisley mini skirts and free-flowing tresses, of musty newsprint and grade z advertisements, fashionable young lovers embraced in an illuminated swirl of kaleidoscopic hearts and psychedelic whimsy—the alternate universe of romance comics in the 1960s and 70s. Their aesthetic owed as much to romance archetypes as to groovy teen magazines and hippy counter culture, and titles like Teen Confessions, Secret Hearts, Our Love Story, and Career Girl Romances immortalized the development of feminism and late twentieth century courting rituals in an ambitious effort to make comic books more palatable to a young female audience.

Romance comic expert Jacque Nodell's blog, Sequential Crush, is the finest online tribute to these comics. Ms. Nodell was nice enough to take some time out of her busy schedule to discuss her love for this genre and its enduring legacy.

SPLICE TODAY: What made you realize that romance comics of the 60s and 70s had lasting cultural importance? Was there an aha moment where all the pieces fell together, or was this a gradual realization?

JACQUE NODELL: In my opinion, pretty much anything coming out of a certain point in time has cultural significance. If it has touched the hearts and minds of sentient creatures, well, then it’s gonna have cultural impact. When I first started reading romance comics in earnest, I was in graduate school pursuing a Masters in History and Museum Studies. At the time, I was completely focused in on the history of the Holocaust and I was originally planning on pursuing a doctoral degree in Holocaust Studies. Over the next couple of years, it really hit me that romance comics fit in with my interests in the portrayal of women in history, my growing love of 1960s and 1970s history, and my desire to contribute to the comic book industry, and admittedly, it was less emotionally straining than Holocaust Studies. Sequential Crush just sort of naturally evolved out of my growing research interests. I really jumped into the blogging thing without much thinking or planning. I just really wanted to share my love of the genre, and things grew from there.

ST: Can you tell me about your publications Forgotten Romance and The Look Of Love?

JN: Forgotten Romance: Artists of a Bygone Genre and The Look of Love: The Romantic Era of DC's Lois Lane, Supergirl and Wonder Woman were both created for academic conferences (The 2009 San Diego Comic Arts Conference and the 2010 Popular Culture Association/American Culture Association conference respectively) as part of the presentations I gave. Forgotten Romance is about the artists of the romance comics who are better known for their contributions to superhero comics and The Look of Love is about Lois Lane, Supergirl, and Wonder Woman and how issues featuring them in the late 1960s and early 70s mirrored that of their romance comic counterparts.

ST: What inspired the focus of Forgotten Romance? What was unique about the romance work of creators like Stan Lee, Jack Kirby, and (long time Superman artist) Nick Cardy, as opposed to those of romance stalwarts like Ric Estrada, Art Capello, or Elizabeth Berube?

JN: One of the reasons for focusing on the artists I did in Forgotten Romance was simply because I felt it important to highlight the contributions to romance comics that these artists made. As much as we all love them, superhero comics are not the be all and end all of the medium. Many of the early creators worked on multiple genres, romance and superhero only being two of them. Some of those artists (such as Win Mortimer) were really given a chance to shine and break out of house styles while illustrating the romance stories. In the case of Mortimer, his work on the romance comics is arguably his best work in comics overall. This tends to be the case for many of the creators who worked on multiple genres, and I wanted to give their romance work equal acknowledgment to that which they are given for their superhero work. 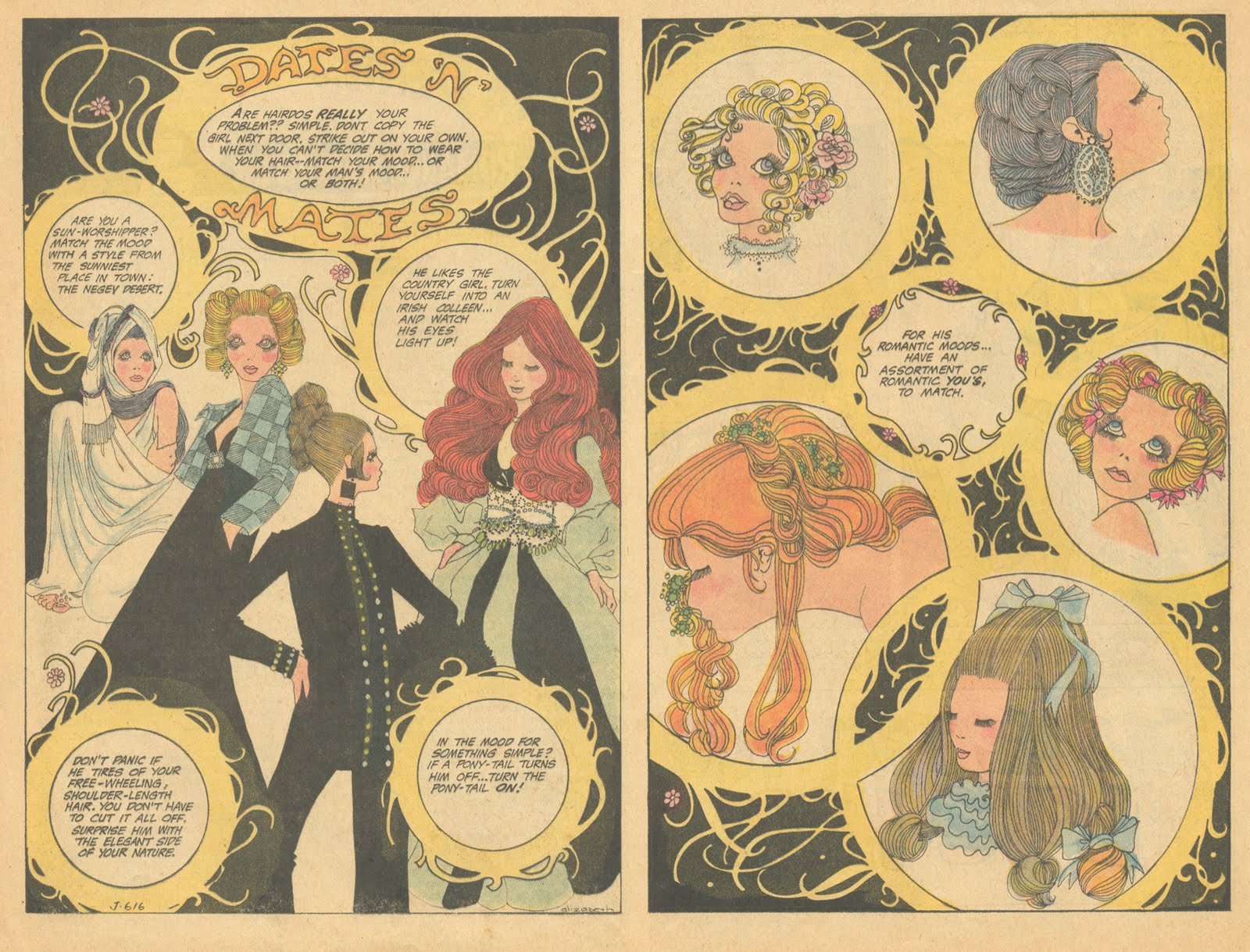 ST: You were on an episode of the PBS TV show History Detectives. For those who haven't seen your appearance, please explain why you were asked to be on that show.

JN: I was asked to be on History Detectives to speak to the significance of a very rare romance comic, Negro Romance #2, that was published by Fawcett in 1950. I gave my input on how it was similar to other romance comics of the period, despite its very specific intended audience. The other experts consulted on the show were in the areas of the portrayal of African-Americans in comic books (William Foster) and Fawcett history (Shaun Clancy). Being one of the few people who study romance comics, I was asked to lend my viewpoint of how this rare issue fits in with romance comic books in general.

Besides the story "Possessed" that is reproduced in full on the PBS website, I have never seen an entire issue of Negro Romance (neither #2 which was featured on the show) or the other issues. Unfortunately, while I appeared on the show, they were unable to show me the rest of the issue for whatever reason. While I would love to eventually own one of these, they are so rare, I don't know if that will happen anytime soon. Anyhow, "Possessed" is your basic boy meets girl story, typical in both plot and art of late 1940s/early 1950s romance comics. Nothing sets the story apart other than the skin color of the characters. During my research for the show I actually found another story from another 1950 Fawcett title, Sweethearts, that was almost identical in plot and story outcome. Essentially, like many other aspects of American life in 1950, Negro Romance is an example of segregation, just played out in popular culture.

ST: What was it like to be on national television?

JN: It was exciting, as one can probably imagine. The most interesting part for me was watching it when it debuted and experiencing the "magic" of editing. We filmed for hours and my portion clocks in at only a couple of minutes. Overall, it was a great experience, and one that I’m honored to have been a part of.

ST: Many of the creators that Sequential Crush showcases were influenced by fine graphic art a'la psychedelic concert posters and art nouveau. In the 60s and 70s, romance comic artists used these hallucinatory elements to symbolize love just as often as traditional romantic images. Why do you think there was a close relationship between romance comics and psychedelic art?

JN: I think that they appear to be closely related because it was one of the prominent styles of the time (for both underground art and commercial illustration). I read and collect teen magazines of the 1960s and 70s as well, and I am quite certain that the romance comic book artists were influenced by those magazines (both the articles and the advertisements) which would have been on the newsstands right beside the comics. So many elements of popular culture creep into the romance comics (television shows, music, movies, fashion), including style and composition. It's clear that the creators of the romance comics were quite aware of what was hip and popular, and were eager to replicate those qualities in the romance comics.

ST: As you note in your blog, the stories in romance comics are often laughably inept, and sometimes these stories also represent very sexist perspectives on gender politics. How can someone enjoy romance comics without being offended by such politically incorrect material?

JN: Well, it is easy to not be offended by what some may call "politically incorrect" material because I view and interpret the romance comics as historical documents. Any "political incorrectness" comes from our viewpoint as readers today. While I am not advocating that we completely accept all of the notions in the romance comics as the gospel truth for the era (it must be remembered that romance comics for the most part depict romance from a white and heteronormative viewpoint), I do think that the attitudes reflected in the romance comics are a pretty good reflection of mainstream societal attitudes at the time of their creation. On the surface level, the art is what attracted me to the romance comics, but on a deeper level, I am always fascinated by the things to be learned from them concerning the depiction of dating and marriage in the second half of the twentieth century.

ST: Since you began work on Sequential Crush have you made any surprising new discoveries about the romance genre?

JN: I have learned so much and I think one of the things that surprised me most as I began to read a great amount of the stories, is how relatable they are on many levels. I was also surprised to learn that there were quite a few stories told from the male point of view and dealt with heartbreak from a guy’s perspective. I have also discovered far more recurring characters and serial stories than I think there was previously thought to be, especially ones that weren’t as long running as the Secret Hearts series, "Reach for Happiness." But probably the most surprising thing for me has been the reception of my blog and the genre itself. There are so many different people from different backgrounds that are interested in reading about the romance comics. For as niche as it seems to be, there is quite a bit of widespread fascination. 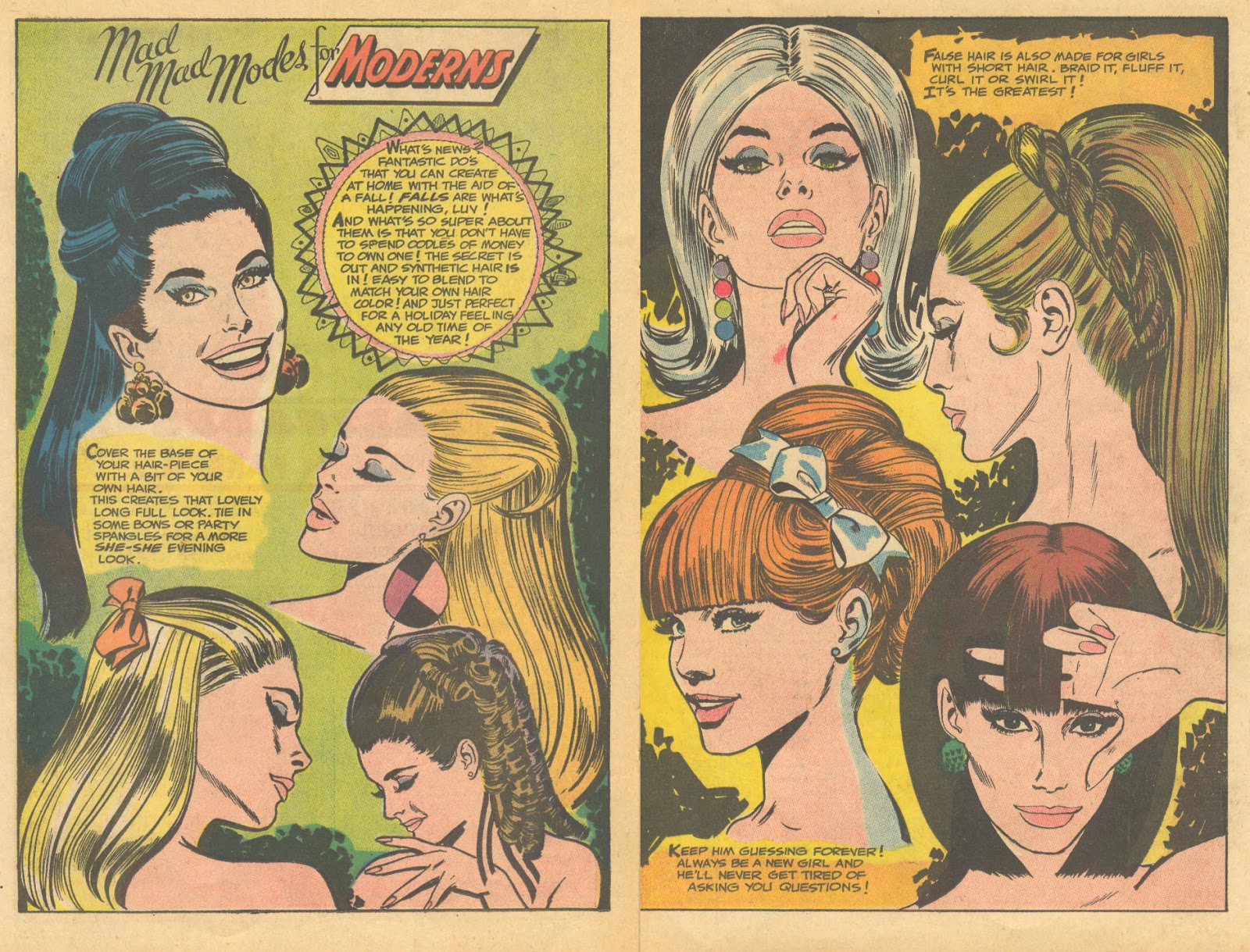 ST: What does the future hold for Sequential Crush? Outside of the blog, are you developing any other archival projects that focus on vintage romance comics?

JN: I have in fact just finished working on a bit of a "secret" project that has occupied a great deal of the time I would have in the past devoted to the blog. But here we go! I’m gonna let the cat out of the bag! I have decided that it is high time for a book version of Sequential Crush and I have just in the past few weeks finished writing a book proposal that I am currently shopping around. I fully anticipate that this may take quite a while and will probably be full of highs and lows. I would definitely be interested in pursuing a more archival type project with DC or Marvel, but from what I can tell, they don’t seem to have a ton of interest in giving their romance comics the serious and well deserved treatment that it deserves. But I really hope I’m wrong on that! They're sitting on a goldmine and I think that I could help them parlay the incredible body of work they have into dynamic collections that would not only please those with an interest in romance comics, but attract new fans to the fascinating and beautiful genre. With my background as a museum professional and curator, I would also love the chance at curating an exhibit on romance comics, but for now, I am concentrating on getting my book out there. After that, who knows? The romance comics are so nuanced there is definitely room for me to do quite a few large projects based on them. I also have plans to redesign the blog, and hopefully, continue to attract new readers.