Because God isn't everything, and nobody's getting hurt. 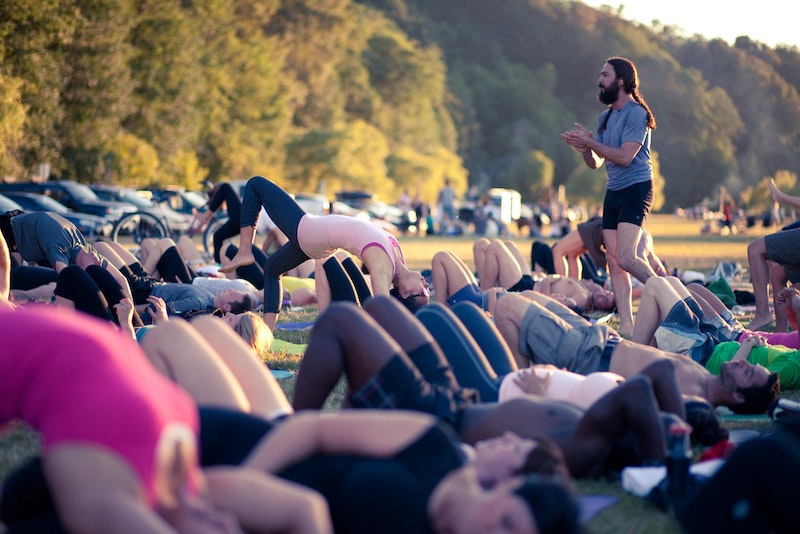 It seems that Brahman and Jesus Christ may have a problem because I practice yoga. On top of that, I may be committing an offense against the Third World and the spirit of multicultural justice. At least such are the views put forward by several mundane beings who keep these vast if varied entities in mind. Odd, because I feel pretty good.

Now I don't feel so bad. I can walk fine, sit fine and have sex fine. When I stand up, I don't look like I'm trying to shove my left shoulder into my hip pocket. Life feels a lot better to me. What made the difference? Three years and four months ago I started practicing Ashtanga yoga.

I'd been doing Pilates off and on for 10 years, during which time I also put in several years doggedly using cardio machines. Hence a good deal of the damage my body had suffered, since I wasn't too smart in how I went about my exercise. Maybe if I had a Pilates teacher stand over me day after day, I might’ve got my body straightened out. But I couldn't afford that.

One day I shuffled into a “power yoga” class at my gym and discovered something that made me better. I could work at it hard because doing it at home, in between classes, didn't hurt me—no, not even a klutz like me. And Ashtanga didn't just straighten out my body. It has made me happier and more alert. It has improved my hearing and eyesight and sense of touch. I'm better coordinated and move more easily than I have in a decade and a half. When you're deep into middle age and getting older, these things count for a tremendous amount.

During my Pilates period there was the occasional year when I sprang for a one-on-one class every week. I had a very intelligent and dedicated teacher who wanted to see me get on good terms with my body. I looked pretty good during my one-on-one phases, and I still think Pilates is better if you want defined muscles. Ashtanga is decent enough for definition, but Pilates does beat it. In every other way, Ashtanga comes out on top. Those other ways have made a big difference to my life.

Now I'm supposed to think there's something troubling about this because of words like God, tradition and cultural appropriation. At The American Conservative, Rod Dreher writes that he, as a devout Christian, cannot believe yoga will ever really be detached from Hinduism. “I don’t see how it is possible to separate yoga from religious practice,” he writes, “and as a practicing Christian, I would not participate in it, nor would I allow my children to participate in it.” Let me reassure him. It's almost four years now, and I'm no closer to being a Hindu than I was at the start. Separating yoga from Hinduism turns out to be easy. Just have a messed-up body and look for ways to make it un-messed.

At xoJane.com, a “writer, agitator and commentator” named s.e. smith (like xoJane, she has issues about the shift key) has come out with a diametrically opposed criticism. She says Western yoga is indeed religion-free and that this is a shame. Her argument is slapped down under this headline: “Like It Or Not, Western Yoga Is a Textbook Example of Cultural Appropriation.” Hindus invented yoga as part of their faith tradition, and now westerners have taken the bits we like (meaning the physical stuff, the yoga postures) and dropped everything else (the scripture and cosmology). We were able to do this because of colonialism, and colonialism is bad, so what we're doing must also be bad.

A tough, hard-edged devotee of the secular might answer that the west freed the physical side of yoga from being trapped beneath a pile of unprovable mysticism. I'll settle for this: my deracinated yoga with its dainty trace elements of Hinduism has made my life a great deal better, and I believe this actual good is more important than theoretical harm. That's the case even if I'm the one who benefits from the actual good, and even if the people complaining include not just agitators in peasant skirts but actual Hindus who care about their faith.

There are Christians who get upset about today's de-Christed version of Christmas. Maybe some don't like it that non-believers can listen to Gospel. They can continue meditating on their God, and Hindus who don't like Lululemon can continue to commune with Brahman. It bothers them that I do what I do. It bothers me that they disapprove. Not everyone on earth is going to agree with you, especially not when it comes to things you really care about. God and Brahman don't let all their followers in on this secret, but I think the smart ones get it. As for s.e. smith, she can always learn about the shift key.