On End of Watch, the conclusion of Stephen King’s “Bill Hodges Trilogy.” 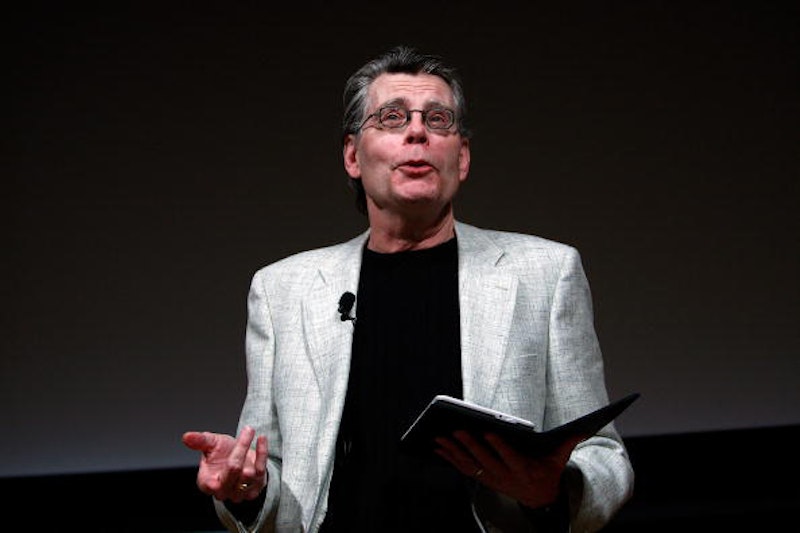 A young, gloating psychopath responsible for an unsolved massacre attempts to taunt the now-retired detective who couldn’t catch him into suicide. Already teetering on the edge of the great abyss, the retired detective—K. Bill Hodges, this “det ret”—finds a new lease on life: tracking down the smug bastard (Brady Hartsfield) who plowed a Mercedes through a crowd of unemployed hopefuls queuing up for a job fair. This was the premise of 2014’s Mr. Mercedes, a frighteningly plausible take on traditional detective noir granted a poignant despair by the backdrop Stephen King chose: the American dream, shattered inextricably.

In his wider oeuvre, King has frequently touched upon this theme, but from Mr. Mercedes to 2015’s Finders Keepers to 2016’s End of Watch, these sour notes resound with a very pointed intensity. In the “Bill Hodges Trilogy,” King will return, again and again, to various perspectives of the Centre City Massacre—to the victims, to the survivors, to the first responders—in a way that suggests that a psychic national desperation is the primary narrative, that anything else happening on the page is ancillary. Scores of novels into a career that shows no sign of slowing down, King remains a master at swiftly sketching characters you buy and care about—even if they’re mere moments away from death.

Mr. Mercedes concluded with a vanquished Hartsfield, as Hodges settled into a makeshift family of sorts that would eventually double as a detective agency. Hodges, his retinue, and assorted supporting characters surface in Finders Keepers as a B-plot deus-ex-machina. Initially a failed heist caper and a literary mythological goof on “Great American Writers” like Philip Roth and John Updike, Keepers evolves into a post-Great Recession fable-thriller, a pained meditation about middle-class angst, spiced with action. It is, once again, completely plausible, occurring in a recognizable, believable universe—up until its final few pages, when Hodges leaves the hospital room where a convalescent Hartsfield spends his days. In those pages, we realize something that will become important later: not only is Hartsfield is as conscious as Hodges suspects he is, but he’s fucking telekinetic.

A few words about length and book series. While it’s rare that extreme literary length is deserved, more is sometimes more. King’s It needed to be as long as it was, and in its most voluble version, The Stand is devastating and powerful. As for book series, at their best, they engender true good will, with readers becoming deeply invested. All of which is to say that as a novel, End of Watch is a work that benefits from two stronger previous installments while, at 400-plus pages in hardcover, somehow not quite long enough. Watch might be King at his most nakedly, cornily Robin Cook, remixing aspects of Frankenstein and Fallen into something beyond plausibility.

The book opens with an ailing Hodges dodging, then receiving, a cancer diagnosis; his chances of survival are slight. Suicides proliferate. Many seem to be connected to Hartsfield’s foiled attempt to bomb a coliseum full of children attending a boy band concert at the end of Mr. Mercedes. Employees responsible for the ward where Hartsfield is housed exhibit bizarre behaviors. A sinister game console turns up at the scene of unexplainable crimes. King’s groundwork from the first two novels is brought to bear as seemingly inconsequential characters suddenly become very significant. Here’s a hint: Those ghostly blue fish swimming across Watch’s cover aren’t there for show.

King’s authorial confidence sells his conceit here, even if a nervous efficiency reigns, a sense of narrative beats being struck; I’d have preferred to see him truly plumb the psyches and backstories of major and minor characters alike, drilling down into early Drawing of The Three-level psychobabble. It’s possible, though, that Watch’s slightness is by design. This is a novel that’s at its most dangerous and piercing—you’ll squirm and wince every time—when dazed, hypnotized teenagers fall prey to their darkest peccadillos, succumbing or nearly succumbing to the allure of oblivion. We’re reminded, again and again, of how increasingly common suicide is in this country. With Watch, we can at least take comfort in the knowledge that this rash of suicides has a very specific source. In our real, surreal world, there are multiple causes that, on the worst days, seem far beyond our control.