Stuck Inside a Canadian Border Holding Cell With Rita Repulsa

The Banned From Canada Tour will now commence. 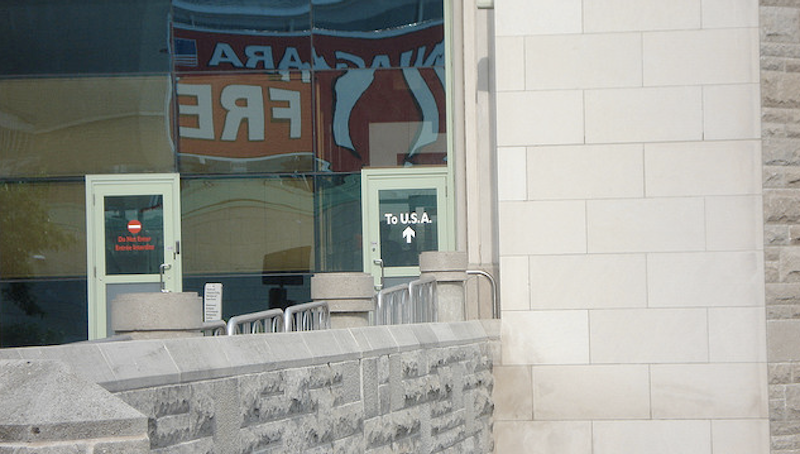 The Canadian border is a sick machine, but we were asking for it. I had been on the road for a week with Alexander Trust and we didn’t think much about crossing over into Canada. You hear horror stories about bands losing their equipment to vindictive guards and getting trapped in purgatory for hours, but we didn’t have a van, drums, a PA, or boxes and boxes of merch: just an amp, a guitar, and lots of clothes. It had to be easy to waltz north with a little white lie. We didn’t have work permits or the LMO (Labour Market Opinion), a $200 sheet of paper that would’ve negated any chump change we made in Toronto or Montreal. “This isn’t a band, officer. We’re not on tour. We’re auditioning for a band in Toronto.” Can’t we go in now?

“Park the car and step inside.”

The main processing building is airy and beautiful, but imposing, like a post office of punishment or a Northeast boarding school. We walk up and present our papers and our flimsy case. The officer is reptilian; lacking eyelids and warmth, with hair pulled back so tight it looks pasted on. She stabs the letters on her keyboard and immediately I know we’re in trouble: the moment she gets our passports and phones we’re screwed. Google my name or Miguel’s and you get everything: tour dates, sly intentions, lies upon lies upon lies. Officer Crocodile calls me and up and asks what I’m doing here. I parrot the auditioning excuse, not even convincing myself. She looks down, looks up, and asks me again. I repeat. She takes me into a private room with another officer. “Alright, the gig is up.” She slams her bony ass down into a hard black swivel chair and raises her voice just below a shout. “Before you get yourself in any more trouble, do you want to tell us what you’re doing here?”

Do I sell drugs? No. Sorry to disappoint, harpie. I tell them everything, the dates, the tour, our plan to drive halfway across Canada and play two shows for virtually no money. I explain that we’ve got a significant guarantee at a New York college the day after Montreal that will cover us for the whole trip. Now they have nothing. They know our real story, and it’s boring. Two solo musicians on tour playing for peanuts trying to get into Canada without permits. There’s no money to be made here, Officer. We’re not selling anything out. We’re not making enough to give your country a share. I’m not fighting them. I look Rita Repulsa straight in the eye and deadpan everything I know to her. She can’t scream at me anymore and it drives her crazy. She’s a mindless bureaucrat. She gets off on putting miscreants in their place. She savors the feeling of cutting people down, wielding the key to Canada. She is mold.

We’re in the lobby a few hours before we begin the formal processing. Repulsa asks me what we thought going in today. “We didn’t have permits, so we decided to…” “USE DECEPTION?” Oh, thanks. Yes. Who wouldn’t leave you at the altar?

There was nothing else to get us on—Google confirmed we weren’t drug mules, so the most she could do to punish us was hold our phones and keys and make us wait eight hours. When you’re in the principal’s office for eight hours, what are you going to do? This felt like being in trouble at school again, everyone giving you that particularly bitter look and voice of sad disappointment and resentment, maybe when you brought in a comic with a swear word or threw a snowball at someone.

I didn’t need this from some border vulture. We were clearly not dangerous or even suspicious, but a true bureaucrat doesn’t let anyone who lies to them go in less than six hours. Of course there were four reports each to file! It just had to be done, and you know, no guarantee on when I’ll be done, so sit down assholes, you’re eating some cold Tim Hortons and watching paint dry whether you like it or not.

We’ve officially been banned from Canada for a year. How will we go on? It passed, and we were on our way back to the U.S.A. Surprise! Another stop. The American side of the border. We park in a small single-car garage and enter the waiting room, a small, cramped gray space clogged with chairs that could double as any Manhattan emergency room or central booking. We sit down and a cop sits across from us, a big guy with bright eyes and a sinking smile. We fill him in. “So you lied to them? Shit… alright, we’ll try to get you guys out of here in no time.” We know what we did was technically wrong, but I don’t feel bad about lying to avoid paying for a pointless permit. There was no money to be shared, or made in the first place. I may have offended Ms. Diseaso by lying, but she’s insignificant: bitter and bent on taking it out on those who cross her. She’s a speck of dust, but being held at the border for hours, you’re imbued with shame, guilt, and sitting next to the guy with fifteen DUI’s and the Russian trying to smuggle in an armory.

What the hell; at least it’s a good war story.