Something Fun and Special 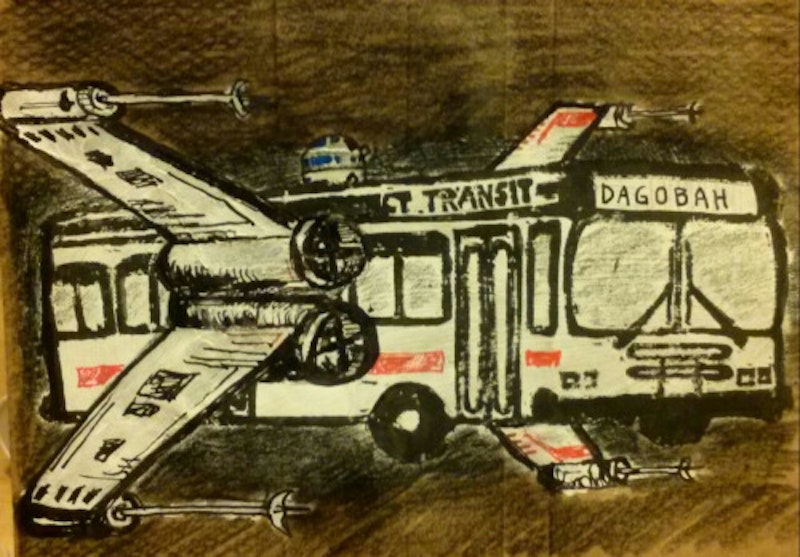 SPLICE TODAY: Hi Josh, I came across your art in an unexpected way. I was doing research on gentrification and saw your name on an article for The Billfold. Your website bio linked to a tumblr page. I expected something more politically tinged than what I found, which was lunch bag art. Can you talk a bit about your professional background?

JOSH MICHTOM: I’m a lawyer at the Connecticut public defender’s office in Hartford. I specialize in juvenile delinquency and child protection matters, particularly in appeals and complex trials. As you saw, I also do some political writing—stuff in The Billfold, op-eds here and there, one piece in Salon—but that’s a hobby, not a living.

ST: When did you begin creating lunch bag art for your kids?

JM: When I got divorced about three and a half years ago. My kids were with me half the time and with their mom half the time, but she stayed in the house where we’d lived when we were married while I was in a new apartment in a new neighborhood. It was hard for them, especially for my older son, so I wanted to do a little special something for them each day to make that new phase of life feel fun.

ST: When did you first take an interest in creating artwork? Is there someone to whom you owe your continued interest in illustration?

JM: I’ve always made art in my free time. My mom is a great artist—it’s not her profession, but she is always drawing and painting and embroidering, so she encouraged me from early on. My girlfriend is an artist and a graphic designer, so in addition to filling our house with sketches and doodles, she keeps us well stocked with pens and painting supplies.

ST: Some of your earliest illustrations use airbrush. That seems to have been abandoned fairly quickly. Are you more of a colored pencil guy?

JM: Those were actually spray painted stencils. I really liked doing them, and it was easy because I lived in an apartment with a balcony, so I could step outside whenever and spray to my heart’s content without filling the place with fumes and splatter. Later, I met my girlfriend and we eventually moved in together to a place that doesn’t have such easy outdoor access (I’d have to go through several doors and down a flight of stairs). I think I initially stopped doing stencils while still in the old apartment just because I wanted a change of pace, but then when I moved, it wasn’t practical. Somewhere along the way, I started to miss that rough-hewn, sharp-angled look that the stencils had, and that’s when I started making block prints.

ST: Having a legal career and children don't seem to be conducive to having lots of free time. Some of your illustrations are fairly intricate. From my own memories of being a kid if you give them something cool once they then expect it repeatedly. Is there a deal with your children on how often they will get a new lunch bag?

JM: I make them new bags pretty much every day that they’re with me and need a packed lunch (school or summer camp). For a little while I did some reusable bags that I folded out of Tyvek envelopes, but I had to photocopy the illustrations onto them (they wouldn’t take printing ink well), and it turned out that the copier at my office was melting them a little when it printed on them.

Eventually, bits of Tyvek caused paper jams. So I went back to bags. There have definitely been times where I set expectations too high—one time I drew all the states of Mexico because my younger son was doing a unit at school on Mexico, and then he thought I would proceed to do states and provinces of other countries on the regular and I had to tell him it was too time-consuming. I start the bags when the kids go to bed, around 9:00, and sometimes I’ll get carried away and keep at it till 11:00. I try to balance out those nights with quicker drawings on other nights, or by doing multiple iterations using a block print. It also helps that, since the boys go to their mom’s house after half a week, I have some time to catch up on dishes, laundry, and other household tasks I’ve neglected.

ST: Do the kids ever bicker about who gets a cooler looking lunch bag?

JM: We have a rule that whoever is dressed and ready for breakfast first can pick, unless I’ve made bags specifically for each of them. Sometimes one of them will say that the other brother’s bag is cooler, but it’s never a big fuss.

ST: There are some fairly surreal lunch bags. A couple of my favorite are "Congratulations. Today is the 2610th day of your life," and "Scorpion Pizza with Cheese." I suspect that a child not an adult would have created the artwork. Is blurring that line a boundary that you establish when working on the lunch bags?

JM:  A lot of the weirder ideas come from actual conversations with the kids. The scorpion pizza drawings came after a night when the boys, my girlfriend and I went out for pizza, and one of them was asking whether a restaurant customer could sue if he ordered live scorpion pizza and was then injured by one of the scorpions. (My legal opinion on that was probably not, putting aside restaurant licensing issues that would probably bar that option from the menu in the first place.)

ST: There are a fair number of whales on the site. I myself was curious about whales as a child. What do you think it is about whales that make them a favorite for kids? Also, I'm guessing by your illustration of whales by profession that you believe that they are natural philosophers.

JM: Either they’re natural philosophers, or philosophers are the first thing that comes to mind when I think of a profession without visible tools! I love whales and my kids love whales. I think there’s something magical about creatures that are so big, so graceful, and by and large, so hidden from view.

ST: Does your wife have a say in what gets painted on the bags? Do the kids have a long list of requests or is it whatever pops into their heads any given week?

JM: As mentioned, I am divorced, but I live with my girlfriend. She doesn’t have a say, strictly speaking, but she makes suggestions from time to time, and occasionally wants to do a bag or collaborate on one, and I often ask her to help me do cool lettering, because her letters are the coolest. The kids make requests sometimes, but more often, I just do something based on a conversation we had, what they’re doing in school, a historical event, or my whim.

ST: Do you do commissions for work? Do you have any future projects brewing in regards to the lunch bags?

JM: A woman once contacted me to do an elaborate, old-timey map of Washington D.C. as a gift for her boyfriend when they moved in together, and I made a few reusable lunch bags for my friends’ kids. For Passover the last two years, my girlfriend and I have used my illustrations and her design skills to make Haggadahs for everyone at our Seder. Recently (see all the June posts), I did a series of variations on a theme, starting with a print I made of a local city bus, and then decorating each image with inspiration of a local place or street name. Several of my friends suggested that these illustrations would be great to have on Hartford’s public buses, which currently don’t have any sort of public art program like they have in New York and other places. So I’m working with Co:Lab, the design studio in Hartford where my girlfriend works, to develop a proposal to CT Transit (our local transit agency). It’s hard to motivate to do that,though, when it’s not directly related to a lunch bag that has to be ready by the next morning—especially because my band has a ton of shows coming up in the next month, and the kids will be in summer camp, which requires daily bags. Luckily, their grandmother’s taking them on a two-week trip in the beginning of July, so maybe I’ll make it happen then.