Shorter of Breath and One Day Closer to Death

Is the recession making Americans rethink our brithday mania? 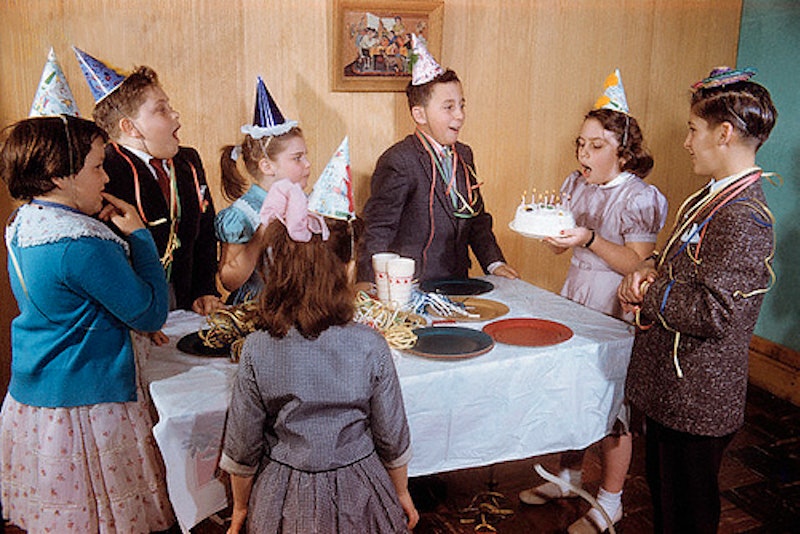 Last weekend, a good friend told me his birthday had come and gone this year without notice, and that's how he wanted it. "When you're pushing 40," he said, "it's nothing to celebrate." Another buddy asked if I was doing anything for my 31st birthday—today. I waffled. He confessed that he was having a "similar internal debate" over whether he wants to celebrate his.

He was accustomed to "having drinks while wishing [he]'d never been born," so drinking to celebrate his birth would be "odd." In the world of modern navel-gazing journalism, we're constantly reminded three makes a trend, even if you have to drag yourself in for the third. The conflict between annual artificial cheeriness and a more stoic outlook is a war of attrition. It isn't likely to be won decisively for some time, but I'm seeing signs that we just might take far more ground than we ever dreamed possible.

Americans have mostly forgotten this but many Canadians—especially conservative Canadians—remember the crushing blow President George W. Bush delivered to Prime Minister Stephen Harper in their first joint press conference in 2006. The Q&A broke down into a scene where the President teased Harper about a present, dragged several other people who shared his day of birth up on the stage, and had everybody belt out a "Happy Birthday" chorus.

At one point, an exasperated Harper half suggested that some of these birthdayers who were ruining his photo-op must be Liberal Party plants. Whatever other "change" Barack Obama delivers, we're probably not going to see a repeat of that scene on his 50th. This is a president, remember, who was confronted with that common childhood query, "Daddy, where do we go when we die?" and refused to tell a young daughter that good little girls go to heaven as he was tucking her into bed. He won't want to take too much notice of that particular milestone.

Birthday haters appear to be winning hearts and minds because America is poorer, more secular, and more tired than it used to be. Fortune, faith, and youthful exuberance fueled much of birthday mania that gripped the country for most of my lifetime. I say that the haters are winning because I would have thought a truce between birthday revelers and haters might look something like this: celebrate the kids' birthdays with gusto, have a bunch of twentysomething bar hops, and tolerate actual parties on birthdays that end in zeroes and, maybe, fives. In fact, people are struggling to maintain even that level of merriment at present.

The rough economy is cutting back on the kiddie parties and smaller, less frequent parties will mean that fewer people will expect much from birthdays as they mature. The bar hops continue but that biological last call comes earlier and earlier as we age. As for milestones, I recently approached an old friend who is rapidly approaching his 60th about doing something to mark the occasion. This is an accomplished guy, much loved by a great number of people around D.C. He hemmed and hawed and effectively told me, Don't Bother.