Personal desperation led to a quick, shallow obsession with MTV’s most unlikely (and annoying) star. 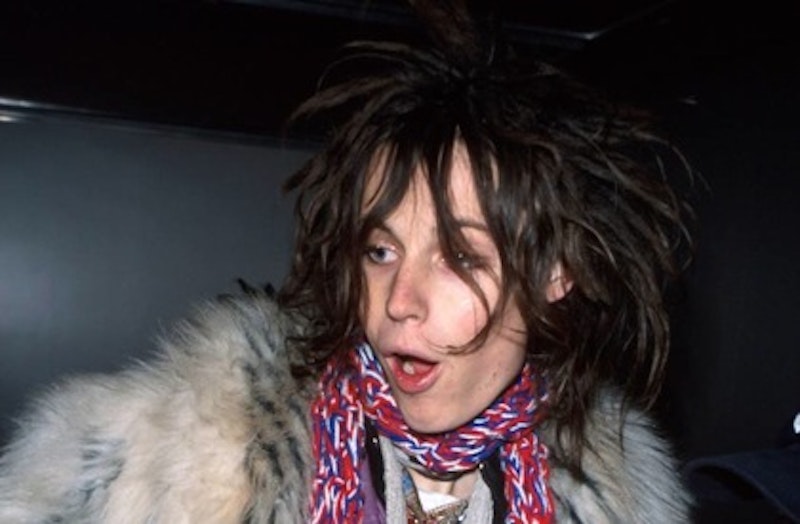 When I moved to the East Village nearly ten years ago, I had never actually had cable television or seen MTV's Total Request Live. I didn't know who the gangly, fur coat-clad urchin who haunted my neighborhood was until one of my friends told me, "That's Jesse Camp, stupid."

In 1998, Jesse Camp had won the popular vote for MTV's “Wanna Be a VJ Contest,” beating out the generally-agreed-to-be more talented Dave Holmes for the part. Camp, an eighteen-year-old from a wealthy suburb of Connecticut, had appeared out of nowhere with no qualifications to speak of other than his rail-thin physique, cartoon character voice and disarming innocence. His meteoric rise to fame was initially celebrated by many—in his heavy metal t-shirts, silly hair and flapping scarves he was a beacon of hope for every alienated teenager in the audience. Later The Village Voice revealed that Camp had won due to a single voter who exploited the system's lax security and voted for Camp thousands of times. “He didn't seem like the typical MTV VJ, all corporate and shit, so I made him win,” the teenaged vote-stuffer stated at the time.

And to me Jesse was unlike any other MTV VJ, mainly in the fact that he was the only one I had ever actually seen, either in person or on TV. Jesse was enchanted with the East Village and seemed to spend most of his time roaming its streets and picking through the dozens of vintage clothing stores near my apartment. After noticing the gawky scarecrow clad in red leather pants strolling around St. Mark's a few times, I started to watch out for him. He was just the sort of boy I was always falling in love with: tall, unattainable, slightly autistic. Trapped in a moment of quiet desperation in my own life, I got a thrill observing Jesse's constant ethereal wanderings through my neighborhood. It was like having a celebrity crush, but on a celebrity so minor he was haunting the same places I was. He bought his carrots at Key Foods on Avenue A just like I did. Yet the fact that he was famous allowed me to keep my crush distant--this wasn't anything that I needed to worry about acting on. It was just something I could obsess about relentlessly and talk about constantly.

I found Jesse Camp's existence motivating and finally could focus my energy on something other than wallowing in a deep depression. Every trip to Accidental Records might involve a sighting so I might as well brush or even wash my hair. In fact, doing a quick walk-by of Jesse’s haunts was sometimes my only possible inducement to leave the house. I started going to more rock shows, and when I'd see him there, I'd stand at a distance and stare at him mutely like a dumb animal.

Then one day he appeared behind me in the line at the ice cream stand on Avenue A. He turned to me. "What are you getting?" he asked.

Not realizing that it was possible that we could ever actually interact, I was dumb-struck. Finally I answered, “Pistachio.”

“Can I have one too?" he asked in his usual child-like, drug-addled sort of way.

“Sure,” I said, and forked over the dollar for his ice cream. I had the presence of mind to ask him for a picture and had a few minutes of idle chatter with him before he wandered off, probably getting ice cream cones from different girls every few blocks. I was smitten.

My obsession with Jesse Camp was matched only by my friends' disgusted obsession with my obsession. Was it real, they wondered? I couldn’t tell them because it was just as much of a mystery to me. Did I really mean it? Had I been living in New York so long that I was unable to differentiate between irony and sincerity? Even I didn't know if I was kidding.

Although they weren’t able to comprehend my preoccupation with the glam-rock poseur, my friends were unable to stop themselves from encouraging it. They smirked as they provided me with candid photos they had taken of him on the street or, worse still, had stolen from their celebrity fashion jobs from shoots Jesse had been on. They accompanied me, first smugly, then giddily, to his band’s Halloween gig at the East Village dive bar The Continental. “His torso is bigger than me,” my friend Cat said breathlessly, moments after she had to break up a fight between two frantic teenage girls that was ostensibly over Jesse.

As consumed as I was with my own problems, which included not having enough money to sign up for cable, I hadn’t been watching MTV and I didn't realize that Jesse was facing challenges of his own. Soon after I had first seen him, the lovable but quite possibly half-retarded waif had left MTV’s TRL to pursue his music career. Even before he left MTV, public opinion had turned sharply against him and possibly in response, Jesse began to act and look more and more outlandish with each passing day. Soon, every sane person in the world was disgusted by him, and it was only me and a couple of open-mouthed fourteen-year-olds who still loved him. Maybe that's actually what I found so appealing, the way his whole wounded manner and awkward gait said, “If only someone would love me I'd stop doing this.”

His band was just releasing their first—and only—album. I was working in the music industry at the time and managed to get his label, Hollywood Records, to give me a free CD. “I don't know why you would possibly want this,” the guy I knew at Hollywood said to me before sending over a courier with the album and some swag. Jesse and the 8th Street Kidz was titled in reference to where he hung out, just blocks from my apartment.

The album was a homage to some of Jesse’s favorite rock legends—“I Want You and Need You” is clearly a tribute to Cheap Trick’s “I Want You to Want Me,” and there’s a slight bang of The Ramones, Motley Crüe and Aerosmith off the whole album. Cheap Trick’s Rick Neilson and Fleetwood Mac’s Stevie Nicks even make guest appearances on the album, which was produced by famed Green Day producer Rob Cavallo. But the bona-fides couldn’t compensate for Jesse’s voice, which was an uncomfortable mix of embarrassingly childlike and creepily adult. Think Michael Jackson crossed with Poison’s C.C. Deville.

The record was just as confused as Jesse probably was. Like him, it’s trapped between childhood and adulthood and unclear what audience it was reaching out to. Was the music for the rockers he idolized or the pre-teen girls that lyrics like “I’ll fulfill all of your wishes, with my big ‘ole sloppy kisses” spoke to? Their parents, however, were likely alienated by the talk of joint-rolling in other songs. Even in the depths of my adoration, I was unable to listen it more than a few times. I festooned my address book with Jesse Camp stickers and sagely realized that Jesse probably needed me to save him from himself. After all, I never would have let him release that album.

As the months passed, the air of tragedy enveloping Jesse became more pronounced. We saw him walking down Avenue A chewing up food and spitting it out into the gutter, an apparent eating disorder. Jesse had started out painfully thin and undeniably cute, but as he embarked on his twenties and his jaw line became more adult and defined, he lost the fresh-faced innocence that had won him so many teenage fans. And as his fifteen minutes waned, he seemed determined to make himself less and less appealing. His hair and clothes became rattier and more bizarre, and he went from being remarkably slender to sickeningly gaunt. What had been a few interesting accessories now became hundreds of bracelets snaking up his bony arms, fingerless glitter gloves, and filthy, spiked dreadlocks.

And as Jesse deteriorated, even I began to abandon him. I had taken up with a guy who was just as tall, just as arresting, and with a sexuality that was possibly even more confused. Slowly, my obsession with Jesse Camp faded. My time was now taken up with trying to save the latest wounded bird in my life instead.

Only a few months later I was sitting behind the counter at Stooz Records on 7th Street. I didn't actually work there, but I still managed to spend a significant amount of time filing records away and chatting up customers about new wave gems. The store was the size of a large dining room table, so Jesse Camp was hard to miss when he strolled in. It was also hard to miss when he started switching price tags on the records, taking the stickers off the bargain bin discount records and affixing them to the sleeves of the more valuable vinyl.

When Jesse arrived at the counter to make his fraudulent purchase I looked at him through eyes that had once loved him, but now I could only see the sadness of the situation—the tragic ex-VJ forced to steal glam rock records. When I confronted Jesse about his price tag switcheroo, he broke down in a flood of apologies. “Are you okay?” I finally asked.

And he wasn't. We had a long conversation about the direction his life had taken, the challenges he faced, the difficulty in having your career peak at the age of nineteen. It was the conversation I had longed to have a year earlier, but perhaps it was my new-found indifference to Jesse that made the conversation possible. Before he left, sans records, Jesse gave me his number and invited me to come over for Thanksgiving.

I didn't go, of course. My fixation on Jesse Camp had been a fantasy that kept me busy during a time when I desperately needed something to hold onto, but I wasn’t ready to have Jesse’s real-life problems intruding on my daydreams.