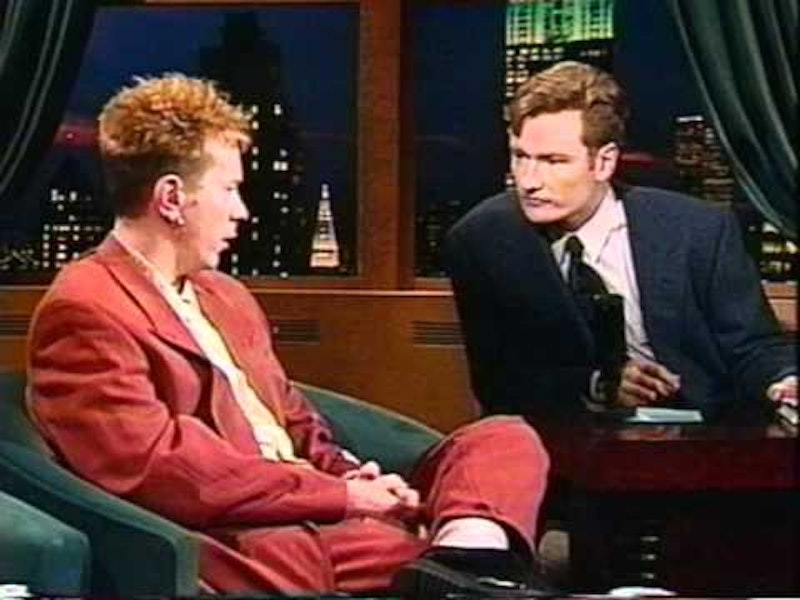 After getting four wisdom teeth pulled a week ago and clouded by Vicodin, I didn’t feel like listening to music until last night, when John Jones’ tape as NERFTOSS—Spirit Advantage, out now on Leaving Records—left me melted into my bed and several sweaters, my space heater running and cooking me wet until five in the morning when I snapped out of it and here I am, good to go.

I found this interview with John Lydon from Conan O’Brien’s Late Night broadcast in the spring of 1994. Lydon is promoting his memoir Rotten and in a rotten mood; clearly constipated, he asks if he can run to the bathroom during the commercial to drop off a “full load.” It’s obvious something’s up his butt. You know, aside from the shit, Lydon is admittedly exhausted after days of press, talking about himself, and encountering the same ridiculous hyperbole about his band and how they “broke” punk and changed the music industry. O’Brien is starstruck, giddy and happy to swallow Johnny Rotten’s bitter wisdom. But he’s co-operative and concise, not quite cagey, just constipated (he also hilariously disses the Allman Brothers, the following guest that evening.) I don’t even know how I ended up here, but through the tape, there’s a palpable somberness, sadness and seriousness to the way they’re speaking and how the audience is reacting.

It’s perplexing—like TV after 9/11—until the end when O’Brien asks about the recent death of Kurt Cobain. This must’ve been mid-April 1994, like the week after. Maybe this is why Lydon is so ticked: no doubt he’s been asked in every engagement to give his take on the suicide of “the first punk prince.” When asked if Cobain shared any of the spirit of the Sex Pistols, Lydon replies with a sad, weary anger: “If he did, he certainly wouldn’t have topped himself, because he would’ve learned that life is precious, and not a thing to be destroyed”—looking down, with not much else to say. Still, he’s obviously affected and probably jealous, a little more than miffed that this sod from Seattle played his game, won everything and more, and let down his family and demoralized his fans by killing himself so violently. After losing many friends to drugs and surviving, Lydon wisely warns whoever impressionable might’ve been watching “Don’t be fobbed off with that whole dirty druggy rock n roll culture. It’s not good for you.”