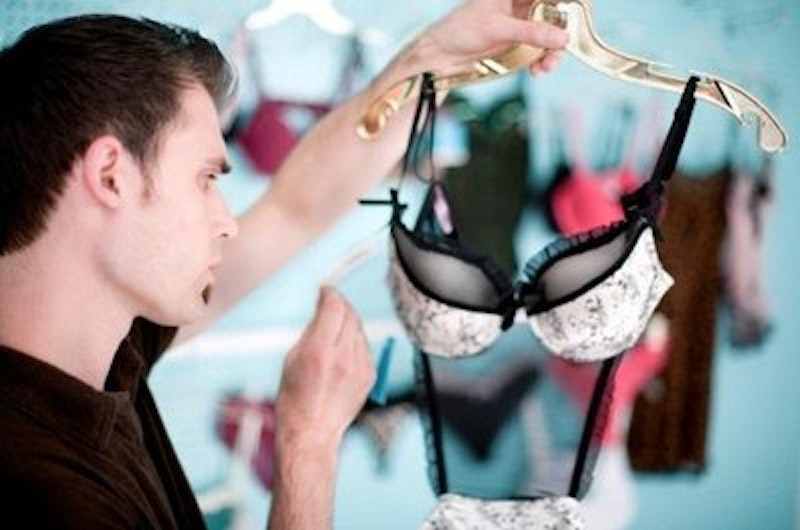 I was shopping at Victoria’s Secret this week and noticed two male customers browsing in the store. One was with a woman, and obviously knew what he wanted to buy for her. He was confidently surfing through the lingerie and had several pieces in his hand as I walked by them.

The other guy was alone. When he came in, he looked as though he was ready to break into a cold sweat. I knew he probably would’ve walked on nails rather than through the enclosure of negligees that loomed ahead of him. A saleswoman approached and he glanced at the floor, muttering something under his breath. I felt sorry for him.

In the past, for men, buying lingerie for a lady meant a ghastly visit to a store where derisive stares made a guy feel like a deviant with a panty fetish. I don’t think that has changed much. A Victoria’s Secret employee from a Chicago store told Business Insider that the general feeling about men is that,  “They buy anything in order to get out of the store as quickly as possible.” The sales force is aware of this potential, since the men will quickly throw down $100 for two bras and get the heck out. Female customers, on the other hand, take their time and are more likely to investigate sales.

I asked a male friend of mine if he’d ever been in Victoria’s Secret. He said he had and likened it to visiting a girl’s bedroom with all her personal items spread out: makeup, perfume, undies, bras. He said it was just too much “pink” for him. Of course, he never had sisters so that may account for some of it.

The founder of Victoria’s Secret, Roy Raymond, created the company as a place where men could shop for lingerie in a comfortable setting. The graduate student from Stanford felt embarrassed purchasing lingerie for his girlfriend and in 1977 opened his first store. The shop’s design was created to resemble a Victorian boudoir.

Although Raymond sold the company in the 90s, Victoria’s Secret remains the largest American retailer of lingerie today. I’m sure it must be overwhelming for a guy to shop for lingerie and I wonder how many actually do. So many colors, sizes, letters that coincide to sizes, styles, even a woman can get lost with all the choices.

But in the end, women appreciate the effort. So men, take a deep breath. Remind yourselves you’re only shopping for lingerie and there’s nothing creepy about it.