That rush of adrenaline at the sight of those perfect cuban heels—also, why doesn't anyone do lay-away anymore? 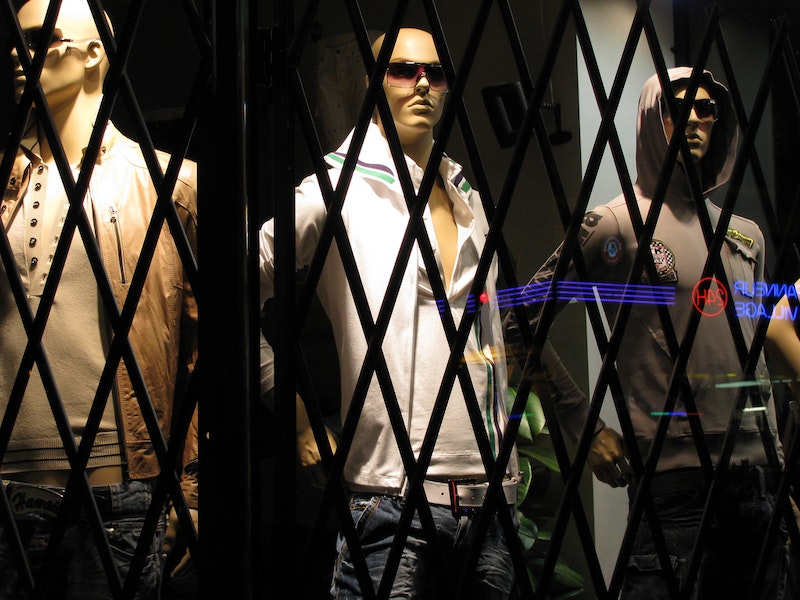 Your heart starts to flutter and your mind goes fast. Everything around you moves in slow motion, but you’re flying at double, triple, quadruple the speed. You foam at the mouth and with each new breath your eyes grow redder and redder, start to crawl out of their sockets. You’re a mad man now, like an addict nervously looking for the next hit.

You check the Chase App on your iPhone to determine how much cash is available. Can you afford to buy it? Can you afford not to? Do you ask the sales clerk to put it on hold so you can think on it? They don’t do holds? Oh shit—think fast. Is that when you decide to cleverly hide it in the back so nobody else will see? Or is that when you speed-calculate which bill gets dropped so you can buy this instead? Retail palpitations.

A retail palpitation is that feeling of super excitement, an adrenaline rush you get when you’re on the cusp of buying something you really like, maybe something you’re not sure you can afford right now. A list of stores/things that give me retail palpitations: Top Man, OAK, Opening Ceremony, magazine stores, specifically Vogue Paris and Italy, Patricia Field, size Xtra small, rings, bracelets, jewels, virtually anything black and asymmetrical, anything furry, anything with sequins on it, Bowers and Wilkins P5 headphones, anything marked way, way down from a formerly astronomical price.

Once I was at Barneys during a “sale,” and if there’s anything I’ve learned about designer labels and boutiques it’s that you should never pay full price. Nobody does. Just wait till it goes on sale; it always does. So I’m in the Barneys and I’m looking around and I get to Ann Demeulemeester, a designer I love and I’m holding in my very hands a distressed black sweater. Retail: $1500. Sale price: $350. At that price it’s basically free so now I have to buy it!

Except I don’t buy the sweater, mostly because the second I allow the palpitation to fizz out I see that I actually want those heels over there much, much more. I’d been looking at those particular shoes for months, and now here they are, on sale! But 60 percent slashed off of $1000 is still a shit ton of money. But as soon as I try them on I’m like, Fuck the Rent.

The truth is I never left Barneys with that Demeulemeester sweater or those fabulous shoes because a) I wanted the shoes more and b) because I brilliantly decided that I’d take a day to think on the shoes and come back and get them. For the next 24 hours I was totally obsessed with those shoes—I’d even planned all my outfits around them, which is exactly what you’re supposed to do. So when I got out of work that day I basically ran straight up 5th Ave. to Barneys where I discovered that another queen beat me to the heels.

That’s the worst: when you really want something but you decide to wait on it because, whatever dude, why not? And then some other person swoops in and snatches it right from underneath you, leaving you even thirstier for it.

I know it sounds like I just buy things willy nilly, but that’s not really true. I love to look but I’m so critical of everything and if I really like something I have to be edged up to the point where I’m actually negotiating with myself about what bill I could pay less of or how little I can eat to even out my budget.

But why even go through all that? I say we should just bring back lay-away. You remember that program where you could set aside anything you wanted in the whole store, pay small installments on it and—ta da!—it’s yours. Whatever happened to that? People have a hard time dropping $1000 on a television, but if you tell them that they can reserve the television if they pay what they can afford on it for a few months, then it’s exciting again. If Barneys, Louis Vuitton and company had layaway programs—with a much more glamorous name—it could be a runaway success. I just discovered John Fluevog shoes, a relatively high-end leather shoe boutique based out of Canada with a handful of boutiques in the U.S. The average pair of Fluevog’s is $400, but guess what? They have a layaway program.