Even better than Pussy Doodles. 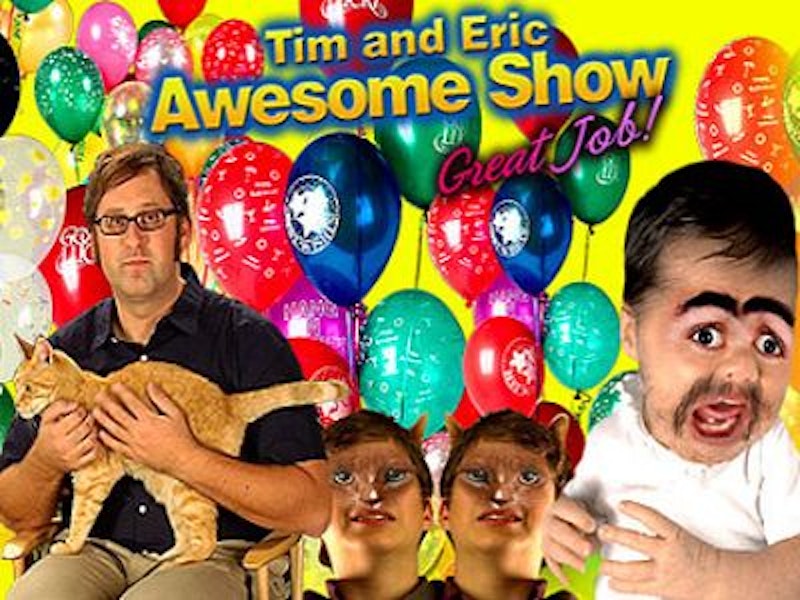 If you missed Tim Wareheim & Eric Heidecker’s five-season riff on modern anti-culture and materialism, there’s always time to catch up. There’s never been a more astute, absurd, painful depiction of who we are than Tim & Eric Awesome Show, Great Job!, and even though it’s over, it lingers like a rash that you’ve scratched too much. It’s uncomfortable, but it felt so good at the time.

Awesome Show was an intensely polarizing force that typically pitted the generic-comedy-loving Family Guy crowd against the pseudo-intellectuals and pot smokers, who respectively argued that Awesome Show was either impossibly stupid or so smart that stupid people just didn’t get it—or that the unhappy viewers weren’t high enough to appreciate it. You can debate the value of 12 minutes worth of testicle and excrement jokes any way you want, but the show left a deep, oozing impression on television—enough for Saturday Night Live to borrow from it more than once. And for the record, I don’t smoke pot.

On the weekend of September 4th, 2010, the ATP Festival in Monticello, NY will be hosting an art show dedicated to Awesome Show, created by a completely different Tim and Eric: notable painters and illustrators Tim Biskup and Eric White. The superficial synergy of it all is just hokey and appropriate enough to work.

Awesome Show presented a barrage of weirdly iconic, quirky items and images with every sketch, often made memorable by exactly how unmemorable they were. Useless products, disgusting problems, surreal medical issues blanketed every moment of the show with an unabashed sense of weird enthusiastic malaise. A false sense of over-importance is lent to every impulse, and accidental catchphrases worked their way like kudzu into each moment of every sketch. And somehow, this has precipitated a very interesting, self-referential collection of artwork, which is either very highbrow or hilariously lowbrow. It’s hard to tell when Tim & Eric are involved.

It’s so self-referential, in fact, that many of the painted images that have been revealed so far are little more than paintings of stills from the show itself. While these focused images are both hilarious and attractive to anyone who’s watched the show regularly, are the artists intentionally eschewing any exploration into the depth of the show’s subtle message? Are the images directly referencing the show in an act of meta-creation that mimics the nature of the show itself? Or does the irony fold back upon itself and just leave us with a boring show of slightly altered screen caps? I suspect that I’m digging these works because of my love of the show, but their ability to stand alone will soon be seen. If they can’t, let’s assume that the awkwardness is very conscious of itself.

It’s a weird premise, but it’s not the first time that the original Tim & Eric have been part of strange public events. The annual Awesomecon in San Diego features awkward re-enactments from their show and family-fun styled park events, while their live talk show which aired briefly on Super Deluxe consisted of a mélange of real and fake guests, and intentionally failed forays into talk show pseudo-credibility. Essentially, the lines between real, comedy, and real comedy are perpetually blurred. If that leaves you feeling unsettled, they’ve done their job.

If these paintings leave you with the same impression, it’s probably intentional. If not, let’s just presume that you don’t get that there’s nothing to get.