Reign of the Nerds

Students of Dungeons & Dragons may know more about "chaotic" and "lawful" political alignments than most poli-sci majors. 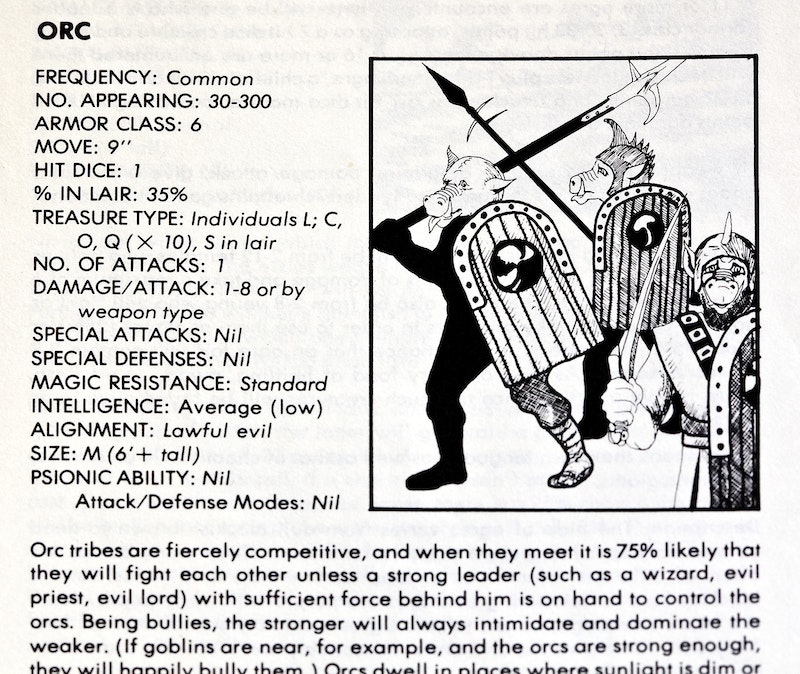 The high schoolers on your street who load up on Mountain Dew and play “D&D” (Dungeons & Dragons) all night may know more about the political spectrum than their parents.

Gary Gygax and David Armisen created D&D in 1974, the same year Richard Nixon resigned from office. It was a time—like now—when questions about the uses and abuses of legal and political power cast shadows over everyday conversations. In a stroke of genius, about which we know very little, Gygax and Armisen organized their fantasy world according to “alignments”: good, neutral, and evil, respectively. Each alignment was sub-divided further into another three sections: lawful, neutral, and chaotic. Any “character” (created and impersonated by a human player), and any non-player character (handled by the “Dungeon Master” or “DM”), had a designated alignment. This helped the DM and the players figure out how their characters would behave, how they’d interpret the events in each “adventure,” and how they’d react to each other.

“Good” and “evil” are as nebulous in the world of D&D as they are in the real world. In theory, certain characters are always “good” (soft-spoken healers), others predictably “evil” (undead sorcerers bent on world domination); in practice, the players usually perceive themselves as “good,” unless they’re weird. They also tend to believe that anything they want to stab is “evil.” “Neutral,” a bizarre category that borrowed heavily from J. R. R. Tolkien’s charmingly indifferent minor characters, continues to baffle players ages 11+ to this day. All we can say for sure is that it has something to do with caring more about nature than people. D&D came out just two years after Arne Naess and George Sessions coined the term “deep ecology.” Apparently, Gygax and Armisen were listening. (That said, it’s too bad that Naess and Sessions didn’t invent a role-playing game of their own, set on a planet imperiled by climate change and industrial pollution.)

Let’s table “good” and “evil,” for the time being, and replace them with “right” and “left.” I’m sure those strike you as slippery categories. Sometimes they get cleared up by the stands people take on individual issues, like abortion rights. Other times, there’s a historical precedent: calling Communism “leftism,” for example, or assigning libertarianism to the Right. You’ve probably heard someone say that “the Left and Right meet at the extremes,” which sounds counterintuitive and profound, but actually just muddies the waters. Former leftists sometimes veer to the right. That’s what happened to Benito Mussolini, William Wordsworth, and many former Communists in America. By the same token, I can give you countless examples of religious conversions. But the fact that a Lutheran in Minnesota has recently become Muslim doesn’t mean Christianity and Islam “meet at the extremes.” People are fickle. Nonetheless our idea of a political Left and a political Right endure.

Contra Crispin Sartwell, who writes (both here and elsewhere) about this issue quite frequently, I have no trouble defining these opposing sides. People on the left are, as we say, “progressives.” They believe in the unfinished project of making society better in unprecedented ways. Their opponents on the right are conservative; they uphold the claims of tradition and existing social structures. Neither side is inherently more committed to individual rights. Conservatives believe in all the individual rights they perceive as vital within the traditions they cherish most. Progressives tend to want to extend individual rights, but not at the expense of the common good. For example, they’ll happily defend the Endangered Species Act against challenges from individual property-holders, because they believe environmental protections promote the general welfare.

These are not vague distinctions, or prone to sudden eclipses, once you separate each concept from its shifting constituency. They are, instead, fundamental questions of political emphasis. Everyone believes somewhat in tradition, and somewhat in tinkering with the status quo, but individuals path-commit to one or the other in ways that snowball into lasting affiliations. How do we make sense of the way people on both sides of the spectrum disagree “amongst themselves”? Is everyone on the Right bound to support Donald Trump? Is everyone on the Left secretly hoping the nanny state will intervene and solve all their problems? This is where politics needs to borrow from D&D.

Let’s say your alignment is “Lawful Conservative.” That means you believe in the rule of law pretty unconditionally. You may believe in the democratic process, and the right of a people to change the laws that govern them—but that doesn’t mean you support tossing laws aside when they become inconvenient. You’re a consistent voter. You support laws that defend traditional institutions—like tax exemptions for religious organizations—and oppose laws you perceive as disruptive to the normal functioning of society. The American “evangelical” movement is lawful and conservative. So are Wall Street and most police officers. J. R. R. Tolkien is extremely biased in favor of legal precedents and comfortable observances; you’ll notice, in his novels, that every “rebellious” act of good is based on restoring lost traditions, reinstating monarchs, and upholding the placid, cyclical existence of the Hobbits. It isn’t bizarre to range fascism among right-wing movements, either; fascists are nationalistic (conservative), nostalgic (conservative), and pro-industry (which, at this point, is conservative too). The Nazi state didn’t cause trouble for loyal German families who believed in Jesus Christ. On the contrary: it did everything possible to empower their success.

The biggest difference between a lawful conservative and a lawful progressive is the way they talk and vote. Their actual lifestyles tend to converge, which is why interns from both parties love to hang out together in Washington bars. Extreme political thinkers, who want to overthrow the government, are still either right-wing or left-wing: they’re either trying something altogether new, or they’re trying to restore a tarnished Golden Age. Though a few decaying remnants of pastoral fictions—particularly “natural law” and “natural rights”—still carry some weight with the Left, most thoughtful leftists reject the notion of a pre-existing “Golden Age.” Most progressives with a college education can tell you that Jefferson owned slaves, and that the Greeks oppressed their women, and may well continue talking in this vein for a long time if you make the mistake of buying them a drink.

The sunset gleam of the pastoral is particularly discernible in the fantasies of anarchists, our apostles of chaotic leftism. Anarchists aren’t libertarians; they aren’t close to libertarians, although the two ideologies sometimes become bedfellows. Anarchists believe in voluntary associations among people: cooperative businesses, direct local democracy, and protecting individual rights through a moral consensus. This is pretty much a distant horizon, in terms of what’s even been tried among human beings. Anarchists don’t mind that; they rightfully consider themselves idealistic. Libertarians, on the other hand, are chaos-loving conservatives who simply don’t trust the law. They’d rather allow people to do all kinds of damn foolishness than try to restrain them. Libertarians don’t think about corporate power often, although they deplore most legislation that increases it; to anarchists, meanwhile, corporations and governments are part of one interdependent, oppressive system of hierarchies. At its base, this speaks to a fundamental difference between two incompatible political visions: doing away with corporate hierarchies, in the name of progress, or assigning them a place—as limited, private institutions—within a natural and timeless order.

“Neutrality,” on the Right and Left, is harder to pin down but no less important. Here are two very different misdemeanors: smoking marijuana, and driving faster than the speed limit. Intuitively, you probably see the first as vaguely “progressive,” the second as “conservative.” That’s true—but why? Because of the way people justify their acts. Marijuana, thanks to the Beats and the hippies and the Rastafarians, has a certain reformist cachet. It will “expand your mind.” It’s an “experiment.” It’s a “spiritual” practice. It’s an analgesic, relieves anxiety, and could be used to treat other disorders as well—if the government would just stop making it so illegal. The marijuana lobby is basically neutral in disposition: legalize it if you can, hide it if you can’t. They’ll take the law’s cooperation, when they can get it, but they won’t take the system’s “no” for an answer. Either way, their ideological justifications are usually based on claims that pot makes people, and society, somehow better off. That’s progressive.

Speeding, on the other hand, isn’t a religious experience, except in certain novels by J. G. Ballard and Jack Kerouac. It’s personally motivated and privately justified: why is this road 30 mph? I want to drive it faster. We think to ourselves, “I know how fast you can go on this road”—know it better than the bureaucrats in the government. Is that libertarian thinking? Almost. But then the person behind you, in the vintage convertible, comes alongside to pass. On a double-laned road. When you were already going as fast as anyone should go. “I hope they get nabbed,” you mutter. So much for libertarianism, eh? Taking a neutral stance towards the law implies that the ends always justify the means. Protest, if you can get the police to listen; riot, if you can’t. Lobby for loopholes in your taxes and emissions; meanwhile, dump what you must—right into the river. In the long run, playing the law for a sucker isn’t really politics at all; as Immanual Kant first argued, it’s a small (but significant) tearing of the social contract. But it’s also something we all do, in bigger or smaller ways, from time to time—and such sabotage becomes a sunk cost for any institution we depend on.

Incidentally, if you want to see the conservative version of this, watch the Fast and the Furious movies. Every film is another assembly line for convenient, nostalgic, made-to-fit neutrality, usually in the name of “family.” A cop goes undercover to bust an illegal drag racing ring. Then the cop becomes an illegal drag racer. Then he and his buddies protect their families against gangsters. Which means joining forces with the cops. Until they’re forced to go rogue. But not really. The reversals get dizzying, and it’s a goofy undertaking from the first five minutes on, but the series’ acrobatic, blasé agnosticism towards the law ought to win some kind of prize: an award for cognitive dissonance turned all the way to 11.

As noted at the beginning, the kids who play D&D learn this stuff by heart. They know all about the chaotic goblin who resents his chieftain, and the lawful sheriff who takes our heroes into custody because the king hadn’t signed off on their escapade. (He also thanks them, surreptitiously, for saving the townsfolk.) They know about the neutral druids who currently baffle Winterfrost’s poachers and its licensed hunters, and wouldn’t let a poor woodsman take one small wyvern home to eat. But something happens to these prodigies of political understanding. They put away childish things and unlearn the truth about alignments. They start insisting that all left-wing scholars are authoritarians at heart, or claiming that Republicans are corrupt by nature. They accuse libertarians of anarchism, anarchists of Communism, and socialism... well, they accuse socialism of making them wear a mask when they go outside. “The political spectrum is more like a circle, really,” they declare. “That’s why I’m an Independent.” And the clarity we were granted, thanks to a lucky, lucid moment on the part of Gygax and Armisen, goes back on the shelf. Maybe those handbooks are still there, waiting to be recognized for unriddling our politics vis-à-vis the law—alongside the experiments that made us a better nation, and the traditions we try to keep from wobbling; things which, taken together, comprise our rightful vocation as Americans.