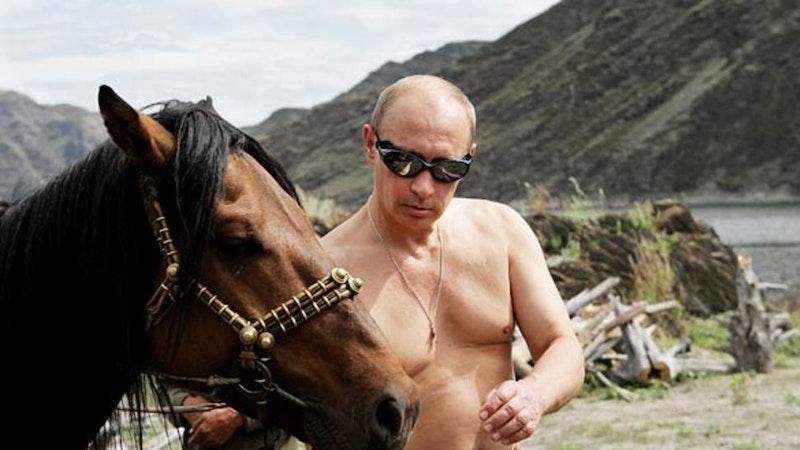 I guess it’s just not popular to find dictators sexy. I used to think Castro was quite dashing and remember getting flak for saying it. Recently during the Olympics I posted this on Facebook: “I confess. I have a secret crush on Putin,” along with a picture of him fly fishing, shirtless, somewhere in the wilds of Russia.

I got in trouble for that. Here are just a few of the comments, all of them negative:

The last comment was fair enough considering it came from a Russian friend, who hails from Moscow.

Sorry Facebook, but I find Putin alluring in many ways. He’s a sober man of mental and physical prowess and has incredible charisma. He’s remained the most popular Russian figure since 1999 among his people, although I realize some of it’s glamourized. He has enemies and supporters but many see him as a hero who appeared from the shadows to resuscitate a proud country that others had run over, looted and left for dead.

As an ex-KGB agent, Putin exudes that sort of James Bond allure. After all, in 2012, the stunt-prone President single-handedly saved a film crew from the jaws of a tiger by shooting it with a tranquilizer gun. This was all during his hang glide into a herd of endangered Siberian cranes.

He cuts a dashing figure on the ski slopes, has a black belt in judo, and even his name is kind of cool. I can’t think of a political leader since President Theodore Roosevelt who’s been more visible in the outdoors. Putin is famous for his love of animals and outdoor adventure and is an avid wildlife and nature advocate. There’s something appealing about a man who can be both sweet to our furry friends and fiercely masculine at the same time.

In a leaked diplomatic cable, published by WikiLeaks, U.S. diplomats referred to Putin as “Alpha Dog.” I’m not sure if the code name refers to his affection for man’s best friend or a reference to the man himself. He’s in the mix for a 2014 Nobel Peace Prize nominee, surprising even me, but most likely the Ukraine debacle will mess up his chances.

I’m sure all my friends would say, “Yeah, you wouldn’t find him so sexy if you looked into his bloody history,” but sorry, Putin is hot. Period.