The Rehearsal exposes the absurdity in our need for control. 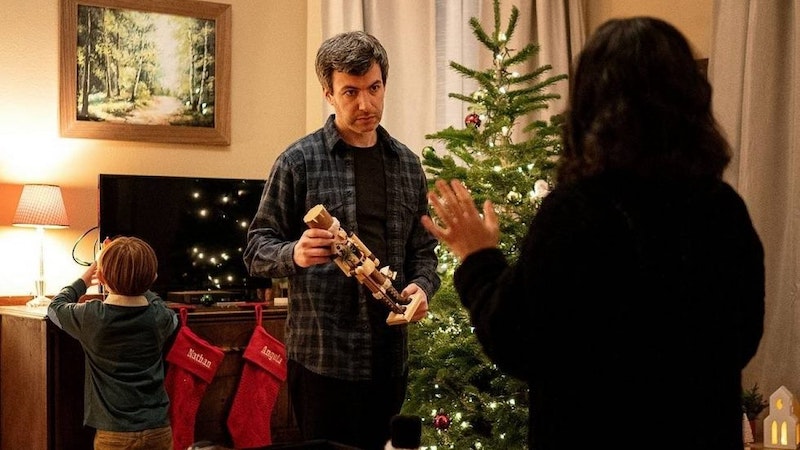 I can tell a work of art is really worth something when I find it difficult to write about. Nathan Fielder’s HBO series The Rehearsal is at times difficult to think about, let alone try to analyze in writing. Every time I start to grasp what it’s really up to, it slips through my fingers.

The basic premise of The Rehearsal is that its creator/star Fielder helps people rehearse for some anxiety-inducing conversation or life event. These rehearsals range from confessing to a close friend about a lie to a months-long simulated motherhood. Like Fielder’s previous show Nathan For You, The Rehearsal mines a lot of comedy from the absurd lengths Fielder’s willing to go to for the sake of authenticity. On the increased HBO budget, these lengths include recreating an exact life-size replica of a Brooklyn bar inside a Los Angeles warehouse and hiring a series of rotating child actors—who are snuck in and off set to conform to child labor laws—to play the child in the motherhood rehearsal.

The Rehearsal is about a lot of things—the ethics of using real life subjects for comedy and performance art, premium cable TV and its absurdly high budgets, the seductiveness of simulacra—but what I keep returning to is the premise: that in order to deal with anxieties, it’s best to rehearse them in all possible scenarios. The underlying assumption is that one can prepare for anything, most vividly illustrated by Fielder’s giant flowchart that maps out permutations of a simple introduction. The joke is that the socially-inept Fielder requires such an intricate roadmap for the most basic of human interactions, but no matter how alien Fielder may seem (private investigator/Nathan For You regular Brian Wolfe dubbed him the “wizard of loneliness”), part of The Rehearsal’s brilliance is its universality: how relatable Fielder’s need for control is, and how tempting it can be to seek to neutralize any threat to one’s control—to leave nothing up to chance.

This is how we live: we carry computers in our pockets, lest we be estranged for a single moment from any product, service or piece of information we might need; we use dating apps to meet people, often chatting for long periods that are themselves quasi-rehearsals for when the time finally, if ever, comes to meet in person; we use separate apps to track our children and loved ones in order to remove any uncertainty about their whereabouts; we schedule meetings in preparation for other meetings in order to expel any doubt about what will transpire. Overpreparation in the name of avoiding chaos is an important part of modern life.

Most would argue it’s also an important part of comedy. For obvious reasons, all standup comedians need to practice onstage—to feel comfortable in front of audiences, to memorize material, to gauge the quality of material based on the reaction of the audience—but I feel a pang of recognition when I look closely at Fielder’s giant flowchart, textualizing conversational language and breaking down every possible response (“I sense some hesitancy in your voice, and that’s completely understandable (friendly chuckle)”). Comedians do it all the time: write a joke, guess possible outcomes (e.g., laughs, groans, silence, etc.), and then write tags to go with each outcome.

But my experience in attempting to predict the future and plan accordingly has never served me well in standup. Overprepared material always comes off as stilted and forced. So just for fun, I decide to do the opposite: I head to Waverly Brewery’s Sunday afternoon open mic with no plan, no setlist of jokes, no idea of what I’m doing. As opposed to obsessing over the jokes I’m going to tell, I just watch the other comedians perform, including a guy in short shorts and a cowboy hat talking in a fake Southern accent, an act that I don’t fully get. When it’s time to go onstage, I say the first thing that comes to mind: that the guy in the cowboy hat has the energy of the friend from Footloose. “Has anyone told you that you give off a real Chris Penn vibe?” I ask the tan, skinny man who looks nothing like Chris Penn. His confusion gets a big laugh from my friend Mike Moran, host of the Sunday afternoon mic, and absolutely no one else. I’ll take it.

I keep riffing about the daytime show, how well comedy goes with the sober light of day. But as soon as I sense the audience’s attention beginning to wane, almost without thought, I revert back to pre-written material. The written jokes don’t fare a lot better—it’s a daytime open mic, after all—but there’s comfort in a script and the illusion of control that it offers, especially when the alternative is riffing with a handful of drinkers.

I leave the stage to tepid applause. Like Fielder, I want to run it again, but funnier this time.