Game of Thrones success can be largely attributed to the fact people like to watch powerful men seizing power. 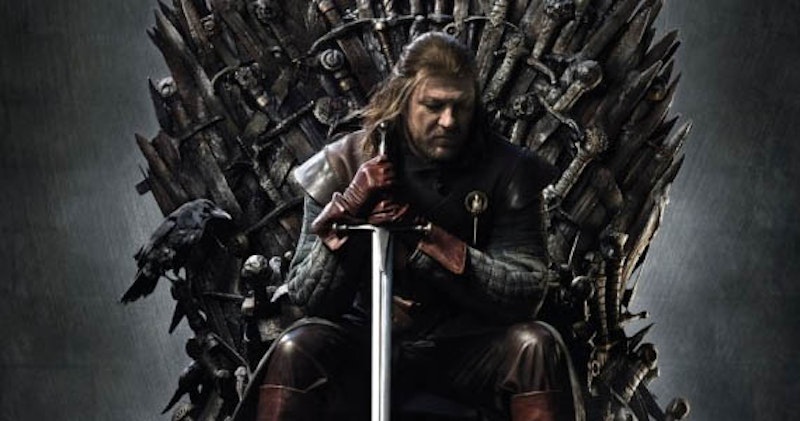 Pressure cookers can produce perfect al dente linguini in under five minutes and orzo in under three. They fell out of favor with the birth of the microwave oven in the 1970s, a safer, less-likely-to-scald-you alternative. While the microwave matched many of the pressure cooker’s convenience, it still could not drastically increase the time water takes to boil. Pressure has that tendency; it forces things to happen faster than they normally would.

Roughly nine million people tune into HBO’s Game of Thrones on a weekly basis. To put that number into context, critically acclaimed series like Mad Men and Breaking Bad historically have an average of around two million viewers. Game of Thrones certainly offers a fantasy novel-based escapism that has mass appeal, but the American viewer does not enjoy any drama more than the Machiavellian power play that drives the show—one that he would never swallow in his actual life.

Power took a bit of a hit last week. If the Penn State incident taught us anything about BCS level college football programs it is this: college football coaches wield more power than athletic directors and university presidents combined, which is why Bobby Petrino’s firing comes at a bit of a surprise. College football coaches tend to get let go due to poor records, bad favor with boosters, and sometimes NCAA violations. Petrino took the fall because he got in a motorcycle accident with a coworker he was, allegedly, romantically involved with and lied about it to prevent his wife from finding out. The integrity at the University of Arkansas was threatened by holding on to this family man turned philanderer.

If Arkansas cared first about winning football games and the absurd amount of money that it can stand to make from doing so, they should have taken a page out of Louisville’s book. Rick Pitino cannot step foot in an Italian restaurant in the state of Kentucky, but no one will mention that when he makes the Final Four. Men in power have a checkered relationship with staying out of trouble or knowing that the trouble they will get themselves in will get dug up because they are men in power. After the Clintons, Weiners, and Spitzers of the world, an expectation for men in power to commit serious digressions becomes the norm.

The success of the Game of Thrones suggests that the worlds that we choose to celebrate offer a drastically different vision of acceptable norms when compared to the world where we live.

The very behavior that destroys the careers of powerful men today—lechery, nepotism, self-serving greed, alcoholism—catapults men to the Iron Throne. Powerful men seize power there. Tyrion Lannister epitomizes all of these traits and seems destined for the throne, especially after his eerily Stringer Bell-esque claiming he “knows how the game is played.” Lannister, like Bell, operates within the world in which he was born. A man of privilege but severe misfortune, he breaks our rules for the sake of entertainment but follows his own code to the hilt.

The single example of a good, old fashioned, self-made, capitalism loving American on the Game of Thrones is Lord Petyr Baelish. Baelish, for those unfamiliar, is a successful entrepreneur and proprietor of the preeminent brothel in Westeros. His character certainly comes off as maniacal, backstabbing, and untrustworthy but that is not all that different than an average Goldman Sachs executive.

The digressions of the powerful have extended to the point where it would not shock the public if the engineer of mortgage-backed securities and credit default swaps actually was Patrick Bateman and he spent his evenings slaughtering New York’s innocents while listening to Huey Lewis and the News.

In fact, large portions of the public perversely hope for these situations to arise. The political Right’s obsession with questioning President Obama’s citizenship and religion exemplifies this hope in its most cowardly incarnation. The fact the President has yet to falter on a personal level beyond sneaking a smoke every now and then is a minor miracle. Dislike Tim Tebow’s throwing motion and public displays of affection toward God all you want, but innocence now has become synonymous with suspicious.

The suspicion is, however, misplaced. We distrust men who willingly seek the pressure cooker. Fame, fortune, spotlight, power—call it whatever you’d like, but it is all related and has a remarkably consistent record of bringing out the worst in people. The Game of Thrones lifts that curtain in a similar way that The Wire did.  It humanizes those who willingly enter a world where consequence seems to disappear. Their struggle to make sense of it elicits a sympathy that we do not seem to have for the people who live outside of the fantasy world.

That is not to say that men in power should get carte blanche in regard to their comeuppances. Throw the book at Blago and his cronies. Petrino’s firing shows a sliver of progress against the inmate run asylum that is the NCAA. Let’s leave our entertainment for HBO and not look for it on CNN, MSNBC or FOX News. These outlets mercilessly reflect a desire to take the dirt out of The Game of Thrones without making room for understanding the human struggle at the center of power. Know that cranking up the microscope, increasing the pressure in the cooker will drive those upstanding few that we have in power past the boiling point and then we might not be able to get out of the way the scalding water.