Harpo with the lid off. 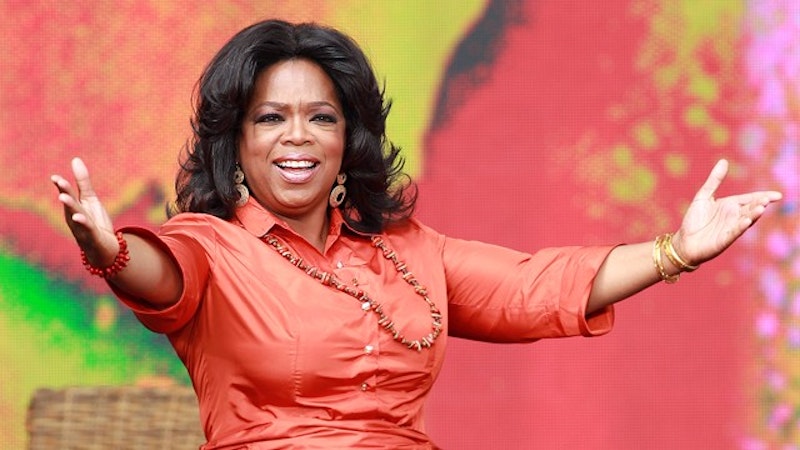 From the omniscient dream vantage point, blessed Oprah Winfrey watches common Oprah Winfrey roll her hair in curlers, lay into lottery scratch-offs with pennies, spar with merciless customer-service reps over credit-card bills, shop for groceries, thread needles and subsequently tend to holes in clothing, and it goes on like this for a long time, but the horror of the dream lies not in its mundane and climax-free droning-on of the plot but in the fact that it never seems to end, so that it’s almost as if blessed Oprah Winfrey is stuck in a purgatorial screening room watching an alternative film adaptation of her own life as it happens, day after day, week after week, year after year, like a never-ending loop of There Are No Children Here. And there is no moral to glean, no lesson to learn, just your garden-variety Twilight Zone nightmare scenario.

Oprah Winfrey had been contemplating a coming-of-age film, to be set and shot in Chad that would tell the story of a young African girl’s trial-by-fire journey to womanhood under apartheid. Oprah Winfrey envisioned something like a cross between Roots, Mamma Mia!, and a Clairol advertisement, chains, sabers, smoldering villages, a dashing young Irishman from Unicef smiling broadly, lots of native Chad women glaring into unforgiving African sunrises while fusion-jazz flute fusion sputtered on the soundtrack, amazing eyelashes, armed men shouting from jeeps, excruciatingly lengthy rape scenes, that sort of thing.

The government of Chad was not intrigued by the premise of the film Oprah Winfrey wished to shoot on its native soil, so Oprah Winfrey bought Uganda, and Oprah Winfrey’s coming-of-age film became the story of a young African’s girl’s trial-by-fire journey to womanhood under apartheid—only in Uganda—and after snorting a few lines of primo Columbian coke with Cornel West at the two-week long wrap bacchanal a tottering, imperialistic Oprah Winfrey ordered the Ugandan army to raid, pillage, and occupy Chad, just for kicks.