Lady Gaga records songs while simultaneously shooting equality out of her tits. 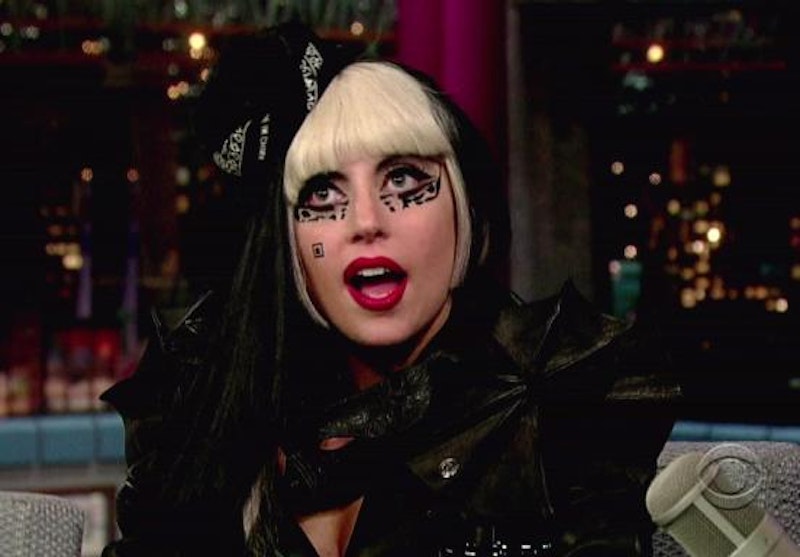 Lady Gaga’s masked appearance on The Late Show with David Letterman this week was eerily similar to an interview on the same show with another outrageous, attention-grabbing pop star. In 1986, the fabulous Miss Grace Jones, already a superstar at that point, arrived to her David Letterman taping late—because fabulous people are never on time—wearing a gold mask that obscured her whole face. The glamorously aloof Grace flirts with David, just like Gaga does in her black mask, gives him a kiss, and devours every attention-seeking second of the nine-minute interview. Cut to Gaga 25-years later and it’s virtually the same interview.

With the much-hyped release of Tranny Gaga’s second full-length album Born This Way, Gaga has done a media spectacular that would make a French philosopher like Baudrillard or Barthes lose their heads. She’s on Saturday Night Live, Good Morning America, 106 & Park, taxis, in your local Starbucks, on Farmville, HBO, Facebook, Twitter, VEVO, in CVS, guest editing magazines like Metro and V, on sale at Whole Foods, Walgreens, MAC, on American Idol, Oprah, Ellen, The View, not to mention those four songs “Hair,” “The Edge of Glory,” “Judas” and “Born This Way” she maced us with.

Bitch, take a Xanax and CHILL OUT FOR A SECOND.

Thanks to all this publicity, Billboard speculates the record will sell one million copies by Sunday, May 29. Looks like somebody will get to go on a shopping spree this weekend. But as much as I love me some Gaga, I’m getting a little restless with all the marketing. We love you Gaga, but you don’t need to be everywhere all the time. Let Beyonce and Katy Perry sing too. Damn. All told, the market blitz worked last time because Gaga’s reputation as a pop star was still fermenting. Limitless fame and a personal fortune of $90 million later, Lady Gaga has penetrated every layer of pop culture. With the annoyingly hard push of Born This Way, it feels like Lady Gaga (or her record label?) is getting a little greedy. How much visibility is enough?

That said, I’ve been listening to the deluxe edition of Born This Way for more than a week now, and there are some serious earworms on that bad puppy. This is Gaga’s “equality” record—in the vein of Michael Jackson’s “Black or White”—where everybody is okay because you were born that way. Recorded mostly on the road during The Monster Ball tour, BTW owes a lot to Madonna but also to other 80s music groups, 90s soul, Whitney Houston, not to mention stadium rock and industrial music. Get your senses ready because this album is ridiculous, and it’s at least as relentless and unsubtle as its maker. Clocking in at a whopping 23 songs—17 songs and 5 remixes—this is an epic record. Usually I only like three-five songs on any given record, so what do you do when you like 13?   If you think you know what BTW sounds like based on the singles Gaga has released so far, think again. “Hair” (the best part of this song is only 45 seconds long and swoops in at around 1:40), “Born This Way” and “The Edge of Glory” are extremely tame and very pop-radio friendly. The real gems on BTW are “Americano”—like Mariachi techno strung out on crystal meth—“Black Jesus-Amen Fashion,” a slower, groovy, yet still thumpy number about being yourself through fashion, “Electric Chapel,” and “Government Hooker” where Gaga tells John F. Kennedy to put his hands on her as she sings “Hoo-ka-aaaaaah.”  The hottest song on the record is a fabulously incomprehensible female empowerment club-banger called “Scheiße” (shit in German). The song opens with Gaga going, “I don’t speak German but I can if you like” and then, robot-like and with no background, drones a gumbo of words taken from German, English, Spanish, and French, creating what’s possibly the greatest earworm ever. The problem? Usually when a song gets stuck in your head, you squeeze it out by singing it. Here’s what I hear so far: “Ich lieben auch’s to be klar, is komment Madre Monster”—and, um, that’s all I got. “Scheiße” was obviously written to takeover our brains and that’s fine and everything. But how can you sing along with a song where the words are impossible to detect?

Say what you will about Gaga, but the Lady knows how to write a clever hook. On “Born This Way,” we’re told “Don’t be a drag, just be a queen.” “Scheiße” gives us “I wish I could dance on a single bed, I wish I could be strong with out the Scheisse, yeah.” And “Highway Unicorn (Road to Love)” gives us, “Ride, Ride pony, ride, ride.”

Reviews of BTW are mixed, with critics like Nitsuh Abebe of New York magazine calling the record a “flimsy fury,” pressuring the oft-cited point that Gaga’s music isn’t as boundary-pushing as her persona. Listen, Gaga is a pop star who makes pop music. She doesn’t play in a queer minimalist-electro-noise-funk band. Okay?   Then there’s Thomas Conner of the Chicago Sun-Times who gave the record two stars (lighten up, bro), as well as a school of other music journalists who hate on the sledgehammer beats. My least favorite tracks are the soft radio friendly ones without banging beats. Hatred of big, commercial beats in America goes back more than 20 years to the disco backlash of 1979.

Gaga tried hard with BTW, and her hard work definitely created a pop gem. I am obsessed with this record, but there’s no denying it’s an aural assault that mugs you in a fabulous dark alley and demands your $12.99. Not that that’s a bad thing, but toned-down recent offerings by indie-darlings such as Yelle, SSION, and Beth Ditto are equally as fierce.

Other singers record songs. Lady Gaga records songs while simultaneously shooting equality out of her tits.