My Attempt To Become A Brony

Could I join this special club? 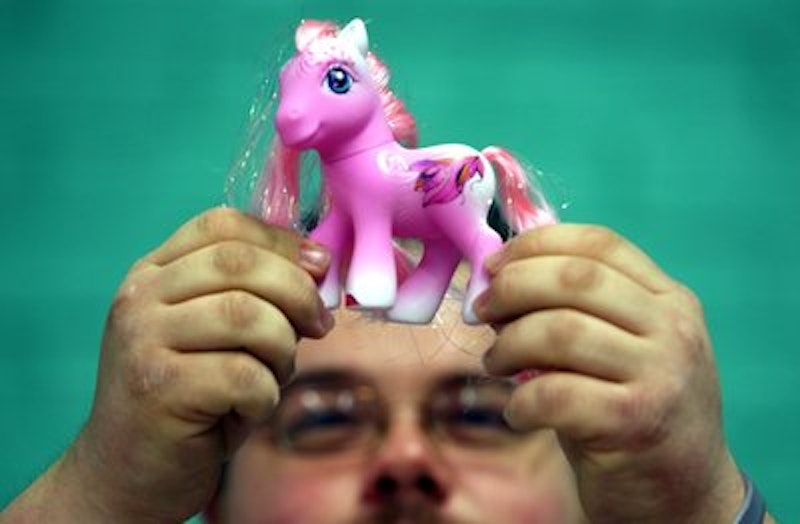 The Brony phenomenon made it to the edge of my consciousness via the Internet in the past year, but I had no real desire for it to penetrate any deeper. Until I impetuously decided to try to become a Brony, that is.

And why shouldn't I? There must be more than meets the eye to this Brony thing. You can't just shut yourself off from everything that doesn't appeal to you on the surface if you want to experience new things. Yes, the "little girl" aspect is off-putting, but I'd just have to see if I could get past that. Bronies are known to be a tight-knit group who get together at conventions to revel in their "bronyhood," so this looked like an opportunity to participate in what has become a feel-good global phenomenon. I've been feeling the need to be a part of something larger than myself lately. I don't attend a church. I'm not a Rotarian or even in the Sunday morning runners club, so this might fill some void.

I started off at YouTube. There are full episodes of the program available, but I decided to just dip my toes in water to begin with. I chose a two-minute clip entitled Twilight Sparkle's Cutie Mark Moment, and was treated to Twilight Sparkle—who is a female unicorn pony, and the main character of the series—attempting to pass a magic test to get into a magic school. In the process, she somehow, in the course of a lot of flashing and dramatic sound effects, ends up with a red star surrounded by smaller white stars on her flank that she excitedly refers to as her "cutie mark." She had clearly undergone a major rite of passage in the magical pony community.

Not familiar with "cutie marks," some research was in order. Heading over to the My Little Pony: Friendship Is Magic wiki, I learned that they’re something ponies are not born with. They obtain them when discovering a unique aspect of themselves that sets them apart from other ponies. "Cutie mark" is a play on words—the My Little Pony fantasy alternative to "beauty mark."

Okay, my initial foray into Bronyhood is not going well at all at this point. Let's just say that Twilight Sparkle's Cutie Mark Moment didn't hook me like, say, the first episode of The Wire. But I pressed on, hoping for an epiphany that would cast all doubt aside. Deciding it would be a good idea to interact with the Brony community, I went to My Little Pony Trading Post, a website which, in addition to selling merchandise, offers discussion forums for bronies. I filled out the online membership form, just basic demographic information, and hit "apply," only to be told my application would be reviewed.

Being put on hold at the Brony forum, I decided on more research. I learned that the 4chan website became an important hub in the inchoate stages of the Brony movement, and that at one time so many Bronies were posting pony graphics that these images got banned on 4chan. This act of oppression has propelled Bronyism into a unified movement, its members held together by a common bond. Did I hear echoes of the American Revolution in this story, or was this Brony thing playing tricks with my imagination?

I got so many chores to do

It's no fun being me

But it has to be my destiny

Cuz it's what my cutie mark is telling me

The lyrics are not so good. Sometimes the music can make up for throwaway lyrics, but that’s not the case here. Is it the worst song I've ever heard, if I'm supposed to be listening to it as a song adults might enjoy, as a Brony?  Well, no strong competitor comes to mind. I would gladly choose any random Billy Joel or Air Supply song if I had to take just one tune to a desert island. And I had the thought, "What if I became a Brony and was humming this song one day and a friend asks me what song that is?" Would I be strong enough to tell the truth and say, "Oh that one's called "What My Cutie Mark Is Telling Me?"

Things were difficult at this point. My research had told me that the cutie mark was one of the main themes of the My Little Pony: Friendship Is Magic series, but it wasn't hooking and reeling me in like it should if I were true Brony material. I’d made somewhat of a commitment to sticking with this, but my resolve was wavering. I had a lot of cutie mark exposition to look forward to if I wanted to get into some binge-watching and really get up to speed, and wasn't relishing the thought.

The next step would’ve been to watch episode one of season one, but I decided to cut bait at this point. I’ve been taught to follow through on commitments, but I dropped a couple of classes back in college, so maybe it can be traced back to that failure of character. Four minutes of My Little Pony: Friendship Is Magic turned out to be all I could handle.

And so I remain a ronin—a samurai without a master—in this world, wandering around alone in search of an affiliation, an identity outside myself. I won’t attend the upcoming Brony convention in Baltimore, not will I be purchase any brony paraphernalia. I won't walk down the street with a Twilight Sparkle "earworm" song in my head either. But you know what? The My Little Pony Trading Post never got back to me with a confirmation of membership. I'm not quite sure how to take being rejected as a Brony, but I can live with it.