Requiem for a Rascal 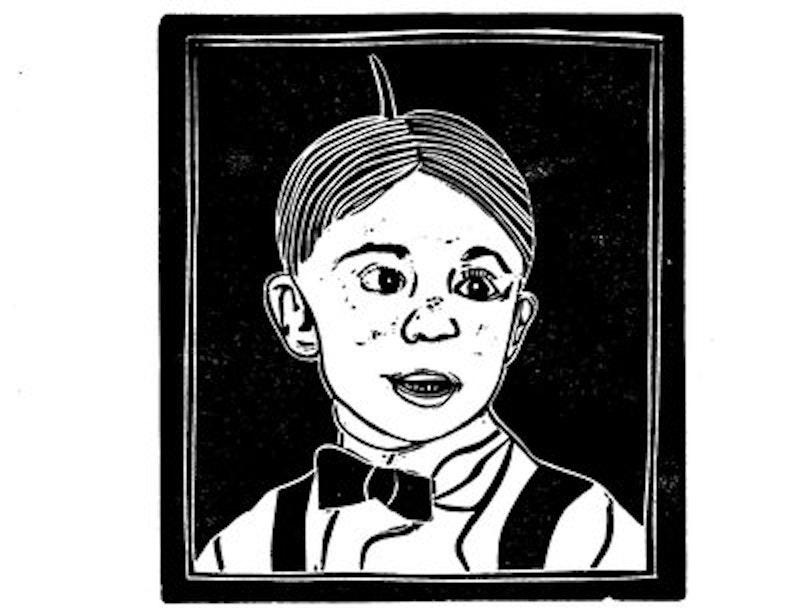 Carl “Alfalfa” Switzer was born in Paris, Illinois in 1927. He grew up during the Depression and his parents were unemployed and broke. In 1935, the family took a trip to Los Angeles. They drove to Hal Roach Studios in Culver City and visited the Our Gang Café just outside the studio gates. Carl and his brother Harold began singing and dancing in the café and in classic Hollywood fashion, they were immediately signed by the studio.

Carl was cast as Alfalfa and appeared in his first Our Gang film “Beginner’s Luck” in 1936. (Harold became an extra.) With his ill-fitting suit, freckles and high cowlick, Alfalfa quickly became a star. According to co-star Darla Hood, “Alfalfa was once mobbed by fans outside the studio while Clark Gable stood by unnoticed.” Alfalfa’s shtick included an off-key singing voice and ongoing efforts to woo love interest Darla while fending off the local bully Butch. On camera, Alfalfa was charming and likable. But off screen, Switzer was an obnoxious bully hated by cast and crew.

Switzer developed a reputation as a mean prankster. He loved to put lit firecrackers into crewmembers’ pockets and tacks on people’s chairs. On one occasion, he hid fishhooks in Spanky’s back pocket. When Spanky sat down, he cut himself so badly he had to get stitches. Another time, he put an open switchblade in his pocket and convinced Darla to put her hand in his pocket telling her he had a Crackerjack ring for her. She nearly lost her fingers.

George “Spanky” McFarland spoke about Switzer’s most memorable prank. “We were filming and they were taking a long time to set up so Alfie decided to pee on the thousand watt bulbs. The lights exploded and filled the studio with a tremendous stench. Everyone had to be taken off set as the crew cleaned up the mess Alfalfa created.”

Another time Switzer spread a large wad of chewing gum on the gears inside the camera. According to Tommy Bond, who played “Butch,” the cameraman became furious and yelled at Switzer, “When you turn 21 I’m gonna find you and beat the shit out of you.”

The child actors were required to attend three hours a day of on set school. Switzer was typically late and refused to do his lessons. He was often kept after class causing expensive delays in production. Years later at an Our Gang reunion, Switzer encountered his old on-set teacher Mrs. Carter. According to Darla, Switzer screamed and cursed at the woman and accused her of ruining his life.

In 1938, MGM purchased the Our Gang comedy rights. Without Roach’s guidance, the shorts lost their popularity. Alfalfa appeared in his last Our Gang film in 1940 when he was 12. With more than 60 films behind him, Switzer’s career as a Little Rascal was over.

Like many child performers, Switzer yearned to make the transition to adult actor. He appeared in Frank Capra’s classic It’s A Wonderful Life playing Donna Reed’s date in the famous dance floor turned swimming pool scene. He also had supporting roles in the Bing Crosby film Going My Way and the John Wayne film Island In the Sky. In 1946, Switzer reprised his Alfalfa character as a teenager in Gas House Kids but the film was a flop. He played a slave in Cecil B. DeMille’s The Ten Commandments and made his final on-screen performance in Stanley Kramer’s 1958 film noir The Defiant Ones.

In 1954, Switzer married the heiress of a grain elevator empire. He and his wife moved to her family’s farm in Kansas and had one son before divorcing in 1957. Switzer moved back to Los Angeles and took a series of odd jobs including bartender, shoeshine boy and hunting guide. Struggling for money, he began drinking heavily. In 1958 he was shot in the arm outside a bar in Studio City. His injuries were minor and the assailant was never caught. No reason was given for the shooting. A year later, Switzer was arrested for cutting down 15 pine trees in the Sequoia National Forest that he intended to sell as Christmas trees. He was sentenced to a year’s probation and fined $225.

In early 1959, Switzer agreed to train a hunting dog for his friend Bud Stiltz. The dog ran away and Switzer posted a reward for $35. Someone returned the dog and Switzer bought the man a few drinks paying him the reward. All told, Switzer was out $50. Switzer spent several days drinking and began to believe the dog’s owner owed him the money. He went to Stiltz’s house in North Hollywood and demanded the $50. Stiltz refused. According to Stiltz, Switzer pulled out a knife and lunged at him. Stiltz retrieved a gun and after a short struggle, he shot Switzer in the stomach. By the time the ambulance arrived, Switzer had bled to death.

At the subsequent trial, Stiltz claimed self-defense and was cleared of all charges. Switzer’s death received little television or newspaper coverage since Cecil B. DeMille died the same day. Switzer was buried at Hollywood Forever Cemetery next to Paramount Studios. In a strange addendum, Bud Stiltz received a Christmas card every year signed “Alfie” until his death in 1984. He never discovered who sent him the cards.