In which our Dorito-cheese covered columnist celebrates two timely American pick-me-ups: Obama and the Super Bowl. 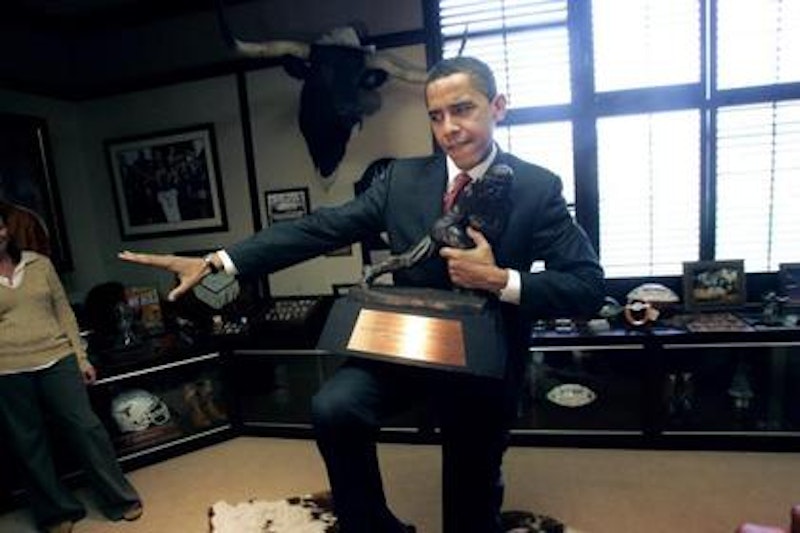 Wowee, I know it’s kinda early, but so far this has been a pretty good year and it’s not even Groundhog Day yet. I mean, after a safe and orderly transfer of Power, the guy I picked to be President of what used to be agreed upon as The Most Powerful Nation on Earth is all correctly swore in now, despite that knucklehead Supreme Court guy helping to mess it up in front of two million-katrillion people, but now that something like 52 percent of the voters who voted have their pick in place (and I can finally collect on my various POTUS wagers), there’s like, a palpable 52 percent sense of Optimism about The United States of America, and a Positive Mental Attitude is always the first step towards Recovery, yes? And look, 52 percent is about a Hundred Percent more Optimism than I detected in the past eight years, kna’mean? Furthermore on the positive tip, I was feeling pretty bad about Bush 43 being all lame-duck and low-profile in his final months of unprecedented Presidential unpopularity, but at least he knew how to Get the Fuck Outta Dodge on Jan. 20, you know? Nicely done, vaya con dios and good luck raising money for your Presidential Library and Museum.

Meanwhile, sure, more Bad Stuff is probably gonna happen, are you kidding? I mean, I know there’s been record sales of Obama posters and buttons and stuff, but you think The Economy is gonna get better tomorrow? Hell no. You think just because we have a nice new President The Enemy is gonna decide to be reasonable and stuff? Can I get a Hells-to-the-No? Yeah, man, more Bad Shit is on the way, but I hope at least it don’t drop before (or—my Greatest and most Nacho Cheese Dorito-dusted Fear—during) my most Festive of Holidays, my Holiest of Holy Days, my annual most American-ist day of being American: Super Bowl.

Arrrooooo!!!!!!! Yeah, baby, Super Bowl! XLIII to be exact, and really man, the Roman Numerals are not only Educational, they are Anachronistic. It’s like, you can learn an obsolete Numeric System by paying attention to Super Bowl! Anachro-cational! Plus: snacks!

You don’t even need to know who’s playing in the Super Bowl to enjoy snacks, do you? Of course not! Super Bowl is all about gustation! What do you like to eat? Meat? Fried things? Vegetables? Tofu? Awesome, go find a recipe for some of that and now you are part of Super Bowl! XLIII! On a Personal Note, this year I will be Observing Super Bowl the XLIII in the company of homemade spanakopita, homemade bacon-horseradish dip, homemade deviled eggs of my own Secret Recipe, homemade chili, an assorted “crudite” platter of raw uncooked vegetables (that almost never gets eaten but I think it is important to have the vegetable option there for people even if they don’t eat the goddamn vegetables, c’mon, a coupla broccoli florets or a carrot, would it kill ya? Try one with some chili on it, fatass), and non-homemade leftover pepperoni pizza from Super Bowl Eve (which I do not Observe so much as Recognize) but I gotta order the pizza from my fave-rave pizza place and they are closed on Sundays. Also: Beer. Plus: Gambling!

Arrrooo!!! Yeah, you can bet on all kinds shit to enhance your Personal Relationship with Super Bowl, and again, no knowledge of or interest in Football is required or encouraged! Check out some of the wacky “proposition” bets you can get in on:

• How long will the National Anthem last? (This will be an over/under, usually somewhere between 1:30-2:00. Like last year, it will be sung by another former American Idol, Jennifer Hudson.)

• How many times the announcers will say ____? (Could be the name of a player not involved in the game, for example.)

• How many times will cameras show ____? (Could again be a famous person or player not involved in the game but in attendance.)

• Will this be the highest rated Super Bowl ever? (Game will air on NBC.)

• What color will the liquid poured on the winning coach be? (Multiple Choice.)

• Who will the game MVP thank first?

• Will the coin toss be heads or tails?

Man, there's all kinds of crazy shit you can lose money on! Plus: Blimps! And: Beer!

Yeah, man, Super Bowl! Where it don't matter who's President as the entire American Experience is laid bare for the Whole Wide World to see, with all kindsa militaristic undertones and overtones and centertones. Usually there’s some sorta “flyover” featuring powerful jet airplanes in a ritualistic and symbolic demonstration of the military might and Air Superiority of The United States of America, and, via Television Advertising, everything that is Important to Americans is displayed in between the football parts of Super Bowl and to help The Economies, many of America's most important and desperate Advertisers spend big on producing ad spots and then they pay top dollar for Super Bowl placement; think about it, man; movies, automobiles, motorcycles, gasoline, various foodstuffs inclusive of snack food, restaurants, electronic devices, charitable causes, career opportunities (Army-Navy-Air-Force-Marines) filmed movie-type entertainments, television programs, tools, hardware, software, iPod, soft drinks, and: Beer.

Next year, I wonder if the Pundits will make anything out of Super Bowl XLIV and POTUS 44?