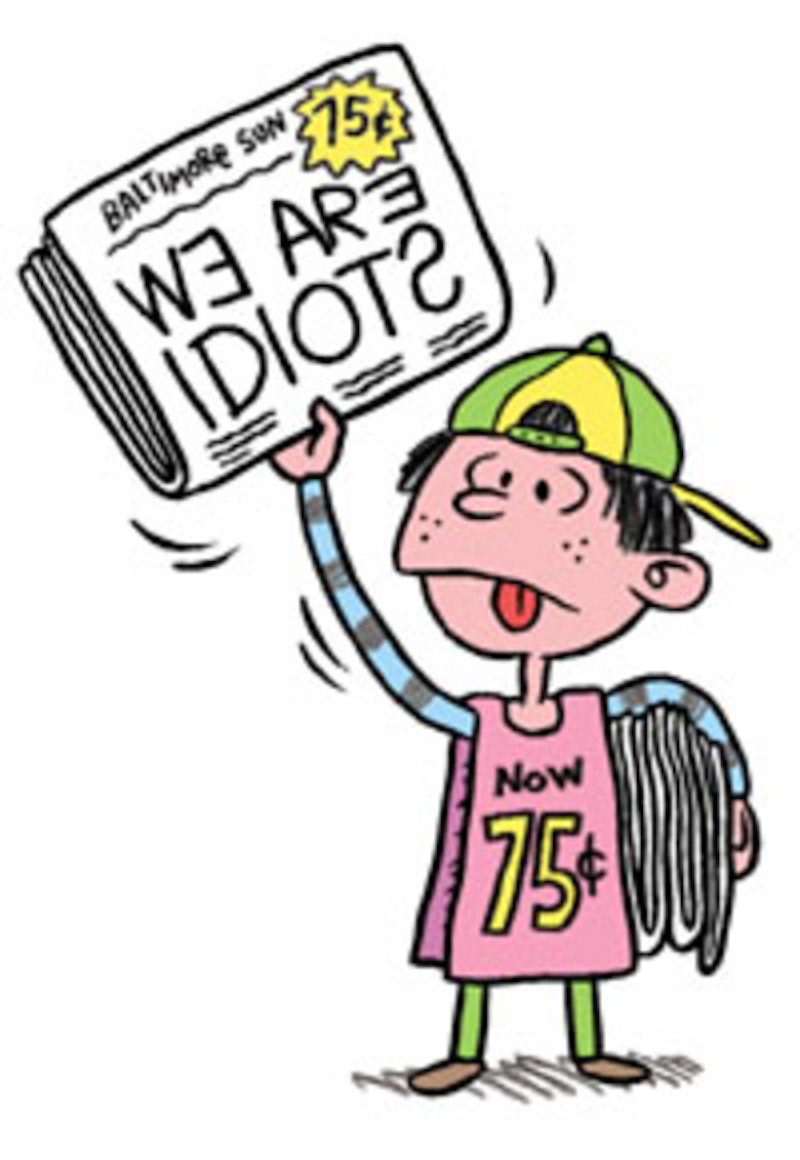 I'm a positive person. I always have lots of helpful suggestions all the time for all kinds of people, places, and things, but I mostly just say them in my head, like when I'm at the supermarket in the aisle where they have all the canned macaroni, I'm all like . . . Hey, Chef Boyardee, man, look, I bet if you made Beefaroni, only without the beef, like with, like, some sorta Textured Vegetable Protein or whatever they put in those vegetable sausage patties I like so much over in the frozen-food aisle, I bet it would be healthier, in terms of cholesterol and fat and all that stuff listed in the nutrition facts on the label, and I guess you couldn't call it Beefaroni anymore, but I bet it would taste pretty much the same, huh? And theoretically, if one were to eat it, one would not be so much of a fatass? In theory? Beeflessaroni? BeefNOroni? Or hey, chicken? Chickenroni? Chickaroni? I bet that would be popular. I would totally try it at least once, and then it would be up to you, my good chef, as far as if it tasted good, like when I went for a can of the big beefaroni, where the aronis were all swolt up to like probably, I dunno, at least 200 percent the size of the normalroni parts, I bet. But anyway, not a fan, and I don't like those mini-ravioli either, they don't taste like the normal-size ones, etc . . .

Just like that, man, all the time in my helpful brain, sending out messages to the products I interact with, 24-7, and this year 365 1, man. It's a pressure-cooker petri dish of constructive comments being beamed out, like, telemagnetically or whatever, free of charge, from my brain to The Universe. Like, I noticed the famous movie star George Clooney has a new movie, and that reminds me of the Great Idea I always have for a George Clooney movie, which is for him to make a Perry Mason movie. I'm talking the 1950s teevee Perry Mason, man, all out there being a high-powered Defense Attorney in 1950s Los Angeles in black and white, smoking cigarettes alla time, having some cocktails, and, like, all I know about Perry Mason is from teevee, I never read any of the books (because of the invention of Television), so my take on Perry Mason is he is a Zealous Advocate, you know? Like how that guy Johnnie Cochran was a Zealous Advocate? Right? All kinds of Courtroom Theatrics to win the case, yes? So I'm always thinking . . . Clooney, man, you gotta make a perry mason movie, like with the L.A. in the Nineteen Hundred and Fifties setup, and the Private Eye with the cool car who would go out and find stuff out for you (because you would be Perry Mason), the crusty police detective and District Attorney who hate your guts because you always blow up their cases, and the sharp secretary errbody figured you were gettin' it on with, how perfect of a George Clooney movie is that . . . How helpful am I with the Career Advice, huh? I give and I give, man, I can't help wanting to help.

For instance, the other day I noticed the fucking newspaper, and maybe I'm more critical because I work at a newspaper, a weekly free one, but I only just noticed that the Baltimore The Sun paper costs 75¢, and I'm like, Holy fuck, you just raised the price of that thing by half, just like the electricity and the gas and all the other shit, sure, but jeez, I thought newspapers were, like, in trouble or something as far as getting people to read 'em, you know? And now you guys go and raise the price on some shit you're having a hard time selling in the first place? Isn't that, like, gonna stop people even more? Like, just the fact that it takes one more coin to get that newspaper box open? Doesn't that kinda, self-fulfilling prophecywise, increase the chance of somebody coming up with insufficient funds and then going all Plan B and reaching for a cheaper paper, or even a free one? And like, the same time you go and jack up the price for the The Sun, you are putting this new daily paper called the "b" on the street, and it's free?!? I mean, are you trying to put your own The Sun paper outta business? Does the "b" name mean, like, Plan B? And why is it lowercase the "b"? No offense, and I'm only trying to help, but I wish you woulda listened to me thinking about you and asked me to help, because I read someplace people who write their name in lowercase letters have self-esteem issues or something, you know? You couldn't even go like, "Hey, man, we're the `B' paper!" If it's so great to put out a free paper, like that's some kinda fresh idea, why don't you guys get all on the same page and stop charging for the The Sun paper? It's not like you make money charging for it, do you? Seriously, I have no idea about your Business Model and stuff. I work at a Free paper, and we make dough on Advertising. Maybe if you stop forcing people to unlock those street boxes with coins, you'll move more papers, and then you can get more people interested in the advertising? I'm not trying to tell you guys how to run your business, I'm just sayin', you know? I only want to help.