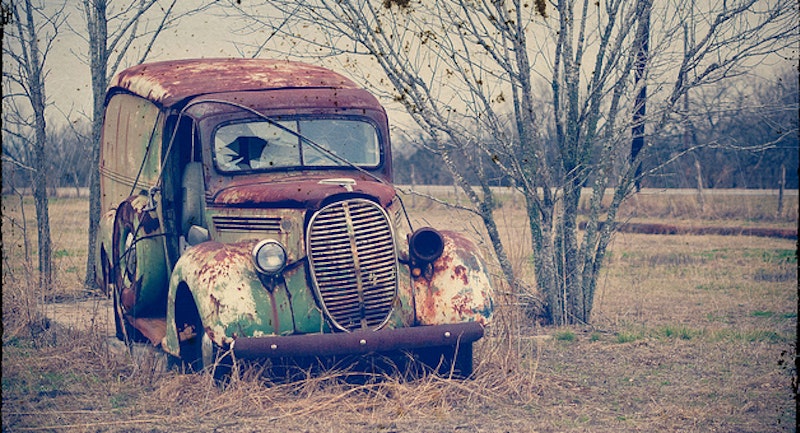 For Texans there are necessities, must-haves, needs, you understand: their steroidal pick-up trucks, their palatial expanses of lawn, their swagger, their skyscraper-sized hauteur. And don’t forget their garages, the two-car and three-car jobbies, because most Texans don’t have basements, and because most Texans’ windshields are a mere slap-tap or three away from implosion, from reverse defenestration on one our great state’s many freeways.

The story goes that all of these freeways and breezeways and highways and other thoroughfares are to blame, that gravel trucks are everywhere, always losing stray gravel, or more specifically losing stray gravel while racing oafishly along myriad highways and byways, splattering windshields and leaving teensy-tiny cracks that expand, given time, into imposing, spider web-like splinters. If you glance around while stuck in traffic—roads don’t build themselves overnight, after all—and notice that two out of every three windshields are in a precarious state of disrepair, you’re probably in Texas, where automobile inspection stations turn an improbably blind eye to cracked fore views.

Ballsy, then, your average, prototypical Texan; ballsy and careless in the way that helmetless motorcyclists and kneepad-less skate rats and the Amish are. Or maybe it’s less arrogance than a willingness to entrust one’s future to fate or God in an unpredictable world where tires, panels, hubcaps, and other detritus regularly causes accidents, injuries, and outright decapitations, where the occasional freak hailstorm, featuring grapefruit-sized hail, emerges seemingly from nowhere to build all kinds of character. Sometimes garages are enough to protect the fragile protective shields so many are foolish enough not to replace on their own. But sometimes, almost inevitably, they’re not.