"Let's Do the Fink" is a grotesque dance craze parody. 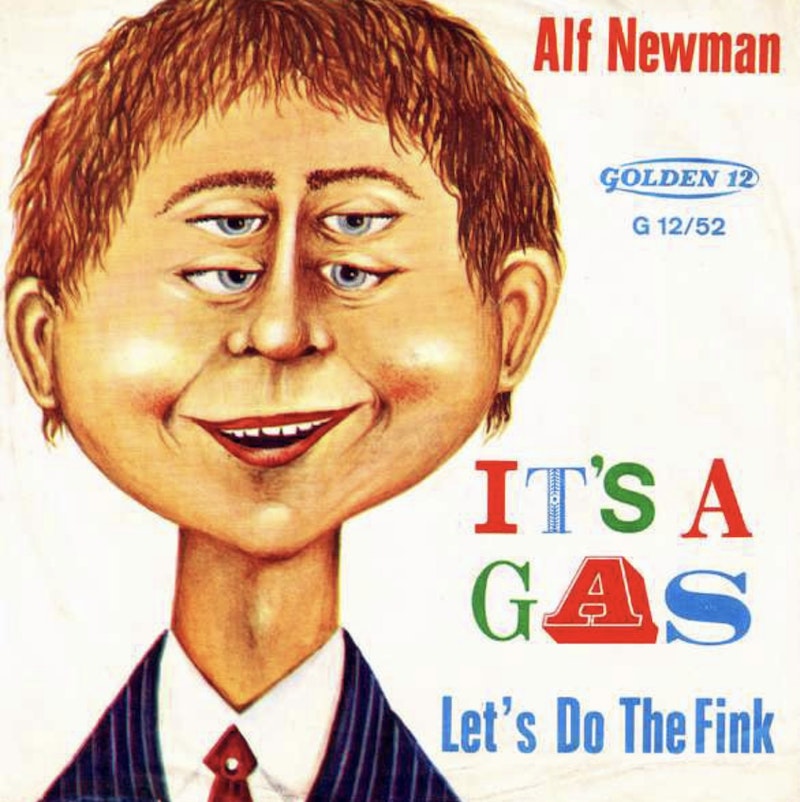 When digging into the background of Mad magazine’s Alfred E. Neuman things get weird fast. The Real Alfred E. provides convincing evidence that this absurd mascot—a toothy, constantly grinning, carrot-topped adolescent—represents a personality that’s constantly popped up in literature, society, and culture. Alfred E. Neuman is the eternal optimist. Forever blinded by positive outlook, he’s always looking on the bright side even in the darkest of times.

Just like all great mythical figures, Alfred has inspired great works of music. The best of these were originally issued as 7” singles. Unforgettable novelty songs, early punk cuts, and sloppy garage rockers have all paid tribute to the power of his perennial goofiness:

There’s no better way to kick off a retrospective of Big Alf’s greatest misses than to spotlight a record allegedly recorded by the Chief Executive Dork himself. “Let's  Do The Fink” appeared several times on a series of Mad themed discs. This soul-powered stomper is a grotesque dance craze parody. The words offer a spot-on prediction of the slam dancing and moshing fads that swept the 1980s and 90s: “Hey creepy chick! Let’s do the fink!… punch me in the nose, hit me with a hose, kick me in the toes, tear my brand new clothes!”

A-side track “It’s A Gas” speaks for itself with an advanced level of brain-dead obnoxiousness that makes “Surfin’ Bird” seem like “Stairway To Heaven.”

Scandinavia’s the mighty frozen land that gave us goof pop masters Ah-Ha, Focus, Ace Of Base, and Abba. Add long-forgotten, aptly named surf punk band The Madmen to the endless list of post-Viking wackos. The reverb soaked, lo-fi production makes it near impossible to discern what the hell these mop-topped youngsters were wailing about, but the name “Alfred” pops up multiple times, and the band’s delivery is about as nuanced as a Beach Party wipe out. It’s clear the group was a lot more excited about sharing their love for water sports and their fave comic book joker than actually rehearsing this crude tune thus making it a triumphant counterpart to Mad’s bonehead legacy.

Of all the tracks inspired by the world’s most famous toothy geek, this one strays the furthest off script. The 006 (pronounced “Double-Oh-Six”) simply tack Alfred E. Neuman’s catchphrase on to a violent punk rocker sung from the POV of a proud street thug. Lead vocalist Doc Watson (no, not the hillbilly icon, just a profound teen menace from The Windy City) yells and snarls psychotic threats while relentless background vocalists shout,“There’s gonna be a fight!” Thunderous rolling tom-tom beats barely provide the anchor of rhythm. Absurdly gory descriptions of broken bones and body parts are as close as this gets to comedy, though perhaps the ironic joke of adding Alfred’s light-hearted words to a bloodthirsty anthem could be a tribute to the ultra-violent 1950's output of E.C. Comics aka Mad’s first publisher.

This was the debut 7” from one of the earliest bands to feature Rhino Records founder Harold Bronson. It was also the first conventional single release of “Nose Job,” a tune co-written byTV scribe Sam Bobrick (Smothers Brothers Comedy Hour, The Flintstones, Bewitched, etc.) and Norman Blagman (a NYC songwriter famed for his work on the original Producers film soundtrack). Bobrick & Blagman were the creative team behind many of the aforementioned Mad-inspired records; other well-known artists associated with these albums included songwriter Nick Meglin (who wrote The Fleetwoods’ 1964 oddity “Ska Light, Ska Bright,” one of the first American ska recordings), Broadway songsmith/playwright Mary Rodgers (daughter of Richard Rodgers; she wrote the original novel version of Freaky Friday), Linda Lavin (Alice, Barney Miller), and voice actor Herb Duncan (The Jetsons).

Smooth NYC doo-wop group The Dellwoods cut the initial recording of “Nose Job” which came out on the Mad Twists Rock’N’Roll LP (1962). Their version is from another planet when compared to The Winos’ take. The lyrics sarcastically praise the romantic wonders of cosmetic surgery. Mogan and co.slobber/sing in praise of a gal whose “schnozz (was) turned up instead of hangin’ down” and who’s “never alone ever since she got her schnozz repaired.” Background vocals sound like tweaker muppets (one of the Winos was nicknamed as Speed Freak Paul). Drumsticks flail with dead arm abandon. The guitar melodies are sweet and catchy, but that’s irrelevant since the whole band sounds wasted. Alfred E. Neuman’s name goes unmentioned, but the spirit of our daring stupor hero lives and breathes in this idiotically genius performance.