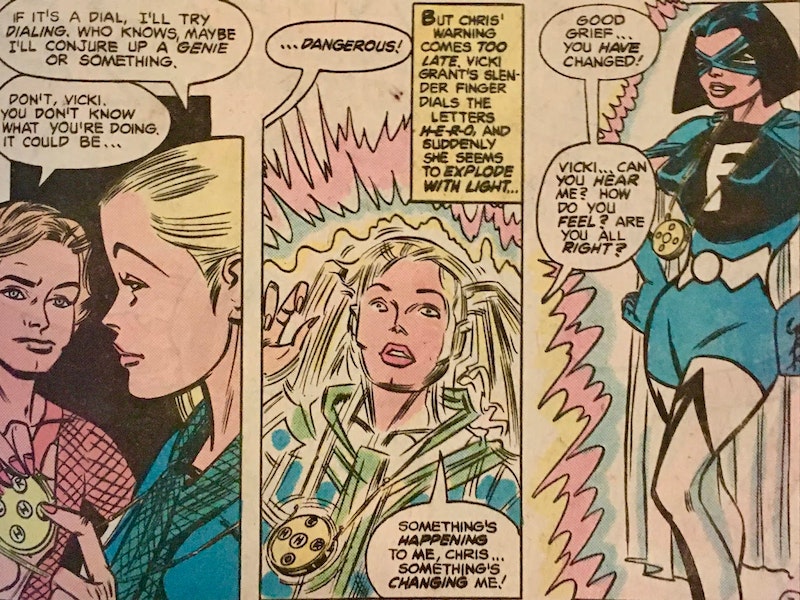 It was a dream come true for aspiring comic creators and diehard fans: amateur-level efforts appearing in widely distributed, pro-level publications. What comic book company would dare take a chance on such a risky idea? Several. DC Comics, Charlton Comics, and Hamster Press all saw a visionary magic in the work of artists and writers whose ambition far outweighed their experience. The three publishers didn’t promote this dichotomy as a gimmick a la some comic book equivalent of America’s Got Talent. No matter how primal, awkward, or unfinished, the content these amateurs generated for major publishers was given the same care and support as more established creators.

DC led this movement with the revival of the 1960s series “Dial ‘H’ For Hero,” a regular feature that began in Adventure Comics circa 1979. “Dial ‘H’” showcased super heroes and villains, super powers, and fashion design developed by amateurs and brought to life by veteran DC artist Carmine Infantino, co-creator of The Flash. In 1981 Charlton began publishing Charlton Bullseye. It too was a revived concept, though their original Bullseye title appeared as a black and white magazine in the 1970s written and drawn by an even mix of pros and semi-pros. The full-color revamp was almost entirely created by amateurs, including teenage artists and others who’d never been published.

In the late-1990s/early-2000s Hamster Press released Fandom’s Finest Comics, one of a series of retrospective anthologies that explored the amateur comic book scene. The movement’s oldest Cold War-era proponents brought a twisted approach that influenced the modern small press comic explosion. Most of Hamster Press’ books were released as paperbacks in large formats. Carefully compiled and annotated, comprised of rare stuff that had never been mass-produced, they gave the wonky world of ditto printed/mimeographed super heroes a gleam of outsider art prestige.

All of these titles display much more than eccentric genius. Charlton Bullseye, “Dial ‘H’ For Hero,” and the Hamster Press collections present an embryonic version of today’s DIY aesthetic. Never content to simply imitate the company product clogging up newsstands and magazine racks, the artists showcased used inexperience as a key element in their work.

Concurrently, indie musicians from North America, the UK, and New Zealand took a similar grass roots approach to releasing homemade audio recordings while utilizing the international network of record stores, periodicals, and mail order catalogues that sprung up as a response to post-punk fandom. Filmmakers like Jim Jarmusch, Lloyd Kaufman, and Bob Clark also benefitted from a free mix of mass marketing and primitive aesthetics. This led them to success within the megalithic infrastructure that defined 1980s methods of film and video distribution (mainly cable/satellite TV and video stores). Just as a Jarmusch film is an iconic glimpse into the weirdest side of Cold War America, the amateur comic book output of big name publishers celebrated the visions of struggling artists stuck somewhere between the limitations of reality and the transcendence of imagination.