Even if she was lip syncing, who cares? 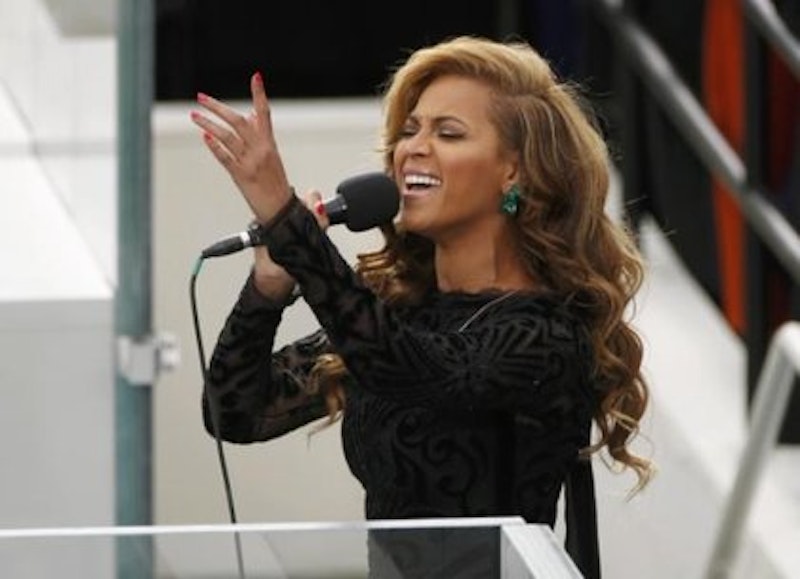 People have been loosing their lace fronts ever since the rumor came out that maybe Beyoncé didn’t actually sing the National Anthem live at President Obama’s Inauguration this week. I was excited about the Inauguration on its own because, you know, Mitt Romney is not going to be president and in general I love the optics and pomp and circumstance of these kinds of ceremonies. But I do have to admit that I really watched the Inauguration to A) see Beyoncé and B) see what look Michelle Obama would be serving her people. Sorry, political pundits!

So you maybe thought you were tuned-in to a fancy Inauguration, but when Beyoncé got to the podium to sting us with her rendition of America’s Most Treasured Song it became a Beyoncé concert. You’re welcome! And she acted like royalty—did you see the way she presided over the crowd? And what about those fabulous head tosses she always does? It was pure magic.

Then rumors started flying that she wasn’t actually singing at all. That the performance everybody said was amazing was pretty much canned. But so what if it was? We know it was Beyoncé’s voice for one thing, and I dare anyone who is mad that Beyoncé maybe didn’t sing live to go out in front of millions without a coat on and sing for the President in 30 degree weather. See how well you do, betch!

I don’t get why people are so upset, but I know that this debate has to do with authenticity and how we value authenticity in our performers. We want our stars to be authentic; that’s why we buy paparazzi magazines of them at the gas pump because, OMG, we get gas too! We want everything to be real. But I say, who cares if what a performer does is real as long as it looks fabulous? Today it’s possible to make it as a singer with literally zero vocal talent. Talent doesn’t necessarily sell records—an image does. And as long as you have a look or some other kind of catch, you’re seen as marketable and that’s really all that matters. Most people remember the Milli Vanilli controversy, when we learned that Milli Vanilli always lip syncs and that, even worse, it wasn’t even their own voices! That’s really bad. Or do you remember that Ashlee Simpson lip synching mess?

Beyoncé is one of the most important singers in the field and, also, the primary reason the Earth exists. So I get how some people would feel cheated if she didn’t sing live. But here’s the thing: I do think she was singing live for one simple reason: expression. Whenever I watch a person perform, I’m always interested in the little things they do around the actual singing—the facial expressions, the hand gestures, the moment. You can lip sync, sure, but it’s really hard to fake the passion of the moment, I feel like. You have to work to bring that passion out. If you re-watch the clip and pay attention to the little things—like the part where she rips that sound piece out of her ear!—it will tell you that something was definitely going on up there.

Anyway, what the plebeians and conspiracy theorists Tweeting from rural Indiana think about whether Beyoncé sang live is not going to put a dent in her hundreds of millions of dollars, her Tribeca loft, or the fact that the betch can SANG. She could sing the telephone book, as that secret video Jay-Z shot of her in a dressing room warming up with “1+1” shows.

Beyoncé has an extraterrestrial talent. I’ve always wondered what it would be like growing up when Michael Jackson was at his hottest, and I feel like Beyoncé is probably the answer to that.