Who writes his material? 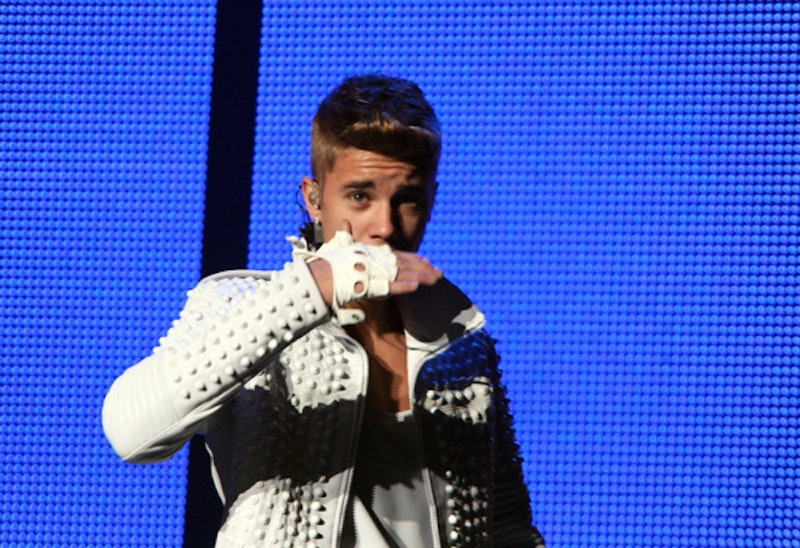 It turns out Justin Bieber is against ignorance. He told TMZ: "Ignorance has no place in our society.” The boy is a step away from giving commencement addresses. The thought about ignorance crops up in a 215-word document released in Bieber's name because enemies leaked a clip of the child telling a racist joke. It's a joke whose stupidity is crowned by its racism. Even without the race business, it would’ve been dumb, but now the joke wears its dumbness like a shit-daubed tiara.

The clip is from 2009, so Bieber was 15. Even that's a little old for this level of material. It's more like elementary school, something boys would tell each other while huddling at the edge of the playground. To be precise, the joke is a sound effect (a chainsaw motor) that's messed around to sound like the world's best-known racial insult, and the insult is presented as the answer to a riddle about “black people.” The teller sets up the riddle, and then makes his chainsaw noise with the racial slur buried in it.

With the clip and joke now abroad in the world, Bieber supposedly contacted TMZ and set the record straight with his 215 words. “Justin tells TMZ” precedes the first block of Bieber text, and the second has “Justin goes on.” The intro to the ignorance quote is “And Justin says,” and the full quote goes: “Ignorance has no place in our society and I hope the sharing of my faults can prevent others from making the same mistake in the future.” That's gorgeous, “the sharing of my faults,” like a letter from Bible college.

Nobody thinks that Justin Bieber wrote the email. I guess TMZ knows we don't believe the “Justin goes on” stuff. The phrasing is one of those dumb conventions that grow up, like the belief that a kid who made a semi-rancid variant of a fart joke five years ago really cares about it now or should. This stupid moment is wobbling way too big in the viewfinder. It's like Justin Bieber had received the Nobel Prize and now people were deciding whether to take it back. He (or his staff) treats the business the same way. Heavyweight phrases tramp through the Bieber email: “power of certain words...  friendships with people of all cultures... my responsibility to the world... thought long and hard...” Maybe he pays his staff to rub him up in this fashion.

Time explains why the apology is high-grade professional work (“kudos to Justin Bieber, or at least to whichever member of his entourage crafted the statement”). The key, Time says, is that the apology stepped up to the problem instead of trying to slip by. The apology said Bieber had done something wrong, the apology said why it was wrong, and the apology included head-knocking (“my childish and inexcusable mistake”). Yes, but the apology was also long. Try this: “I was 15 and I didn't know anything, and I thought I could be smart by mouthing off about race. When I did it, I was insulting people who had never done anything to me. I'm sorry I was that dumb, and I don't do it anymore.”

I wrote that myself. It lacks dignity, but that's just as well.