A Celebration of Life and Death(fest)

The Hare Krishna Festival of India Tour is subversive, albeit subtly. 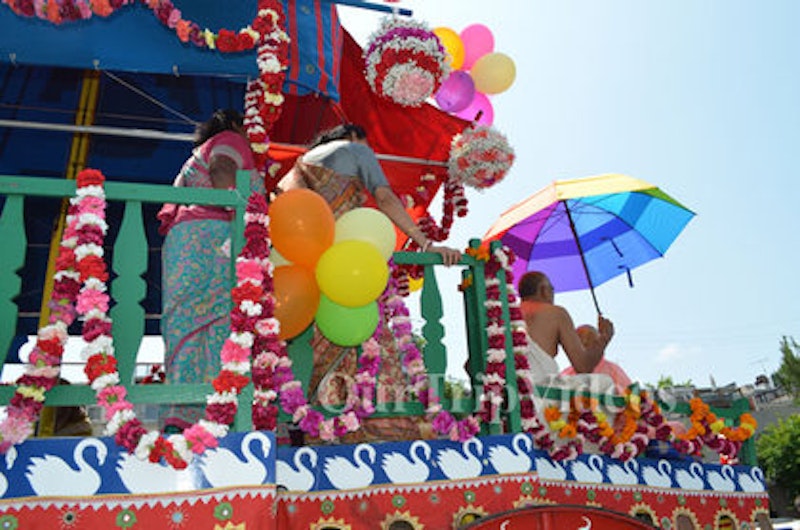 Baltimore is stop number nine on the Festival of India Tour—a Hare Krishna sponsored event that’s zig-zagged across the United States for the past 11 years. Traditionally, it begins in Washington D.C and then hits southern Maryland before bouncing down to Dallas and Houston. The festival arrives in Baltimore on the Sunday before Memorial Day and disappears only to reemerge in Atlanta a few weeks later. But when in town, the organizers set up a cheerful village on McKeldin Square—home to the infamous Pratt Street Massacre and Occupy Baltimore movement. Akin to its notable predecessors, The Festival of India Tour is subversive too, albeit subtly. At its core, it's a flagrant attempt to expose people to the philosophy of Hare Krishna—bliss, reincarnation and worship.

The event is a wonderfully orchestrated presentation, one that begins on Saturday afternoon when a steam of workers erects a tent pavilion in the heart of Baltimore's most famous traffic median. They toil away for hours, tirelessly going about their work. And by the time the sun goes down, the tents are left for exploration by the curious public. Only boldly lettered signs offer insight into the promises of tomorrow: Free Feast! Spiritual Enlightenment! Human Transcendence! The Science of Reincarnation!

Sunday morning, people begin to fill the grounds with equipment, tapestries, food, and pamphlets. A stage is installed beneath a wide canopy and a two-man band begins a three-hour set dedicated to a single song: Hare Krishna Hare Krishna! Krishna Krishna Hare Hare! Hare Rama Hare Rama! Rame Rame Hare Hare! This mantra—a chant designed to permeate the layers of human consciousness—repeats itself thousands of times throughout the day, constantly pulsing in the background, providing a soundtrack to the celebration.

Curious bystanders are drawn to bright colors and foreign ritual. They're encouraged to walk straight through the center, funneled past shops hawking tapestries and t-shirts, some depicting brutal acts of Karma. Mixed in with the traditionally dressed Krishna followers are attendees of another festival: Maryland Deathfest—also in its 11th year. Maryland Deathfest, which bills itself as “the premier metal festival in the United States,” is a four-day event that takes place only a few blocks east of McKeldin Square.

Outside the epicenter of Hare Krishna festivities is a shady hill that overlooks Light St., constantly pushing new cars into the congested artery of E. Pratt. Tall trees—survivors of the Grand Prix purge—offer shade to voyeurs. From the knoll, it's easy to gain a panoramic perspective of the event, taking in smatterings of brilliantly dressed people locked in a panic of excitement. In the distance a float obstructs a traffic lane. It's hard to tell exactly when the procession will move because it surges in spurts, often succumbing to spontaneous dance circles. A concrete sky-bridge looms garishly above the float at one point. But on this Sunday it's swarming with children eager to drop fistfuls of flower petals onto the heads of dancers.

I sat at the base of the hill with a mound of doughy samosa drenched in tamarind sauce. Next to me were a couple of Deathfest attendees relaxing in the shade. We got to talking, and I asked about what drew them to the Hare Krishna festival. One man said, “I've been coming here for years. It's a free lunch and it's close by.” He smiled and scrunched up his face, “I think it's great.” His friend, a woman named Jeffee, commented on the Krishna's draw, “It's interesting,” she said, “I like the new perspective. I'm an atheist, but I was brought up Catholic. So it's always fascinating to experience someone else's take on spirituality.” When asked about what intrigued her about Deathfest, she said, “I got into it [the music] when I was a teenager because I liked how different it was compared to everything I knew.”

After finishing my food, I headed back into the fray where I was intercepted by a large man named Palaka Das, who was passing out Dum Dum lollipops and books about Hare Krishna. He offered me a lollipop and we discussed his relationship with Krishna. “I got into Hare Krishna when I was 14. I was brought up Catholic, and I was hearing all this stuff at the time about Hell and eternal damnation. It didn’t make sense that you could live a mostly good life but be punished for small mistakes. So I started chanting Krishna, and getting into Krishna.” He then explained more about the effectiveness of the chant: “It’s a powerful mantra. It’s like a strong drug and it works. You just have to say it.”

Moments later, the large procession that had stalled on Light St. finally made its entrance into the center of the gathering. Pulled by people lugging thick ropes, a platform, suspended 10 feet off the ground by mammoth wheels, came to a final halt. The canopy top suddenly ballooned upwards. After reaching its peak, flowers and small pieces of candy were tossed into the surging crowds that massed below. With hands outstretched they reached for the statue of Hare Krishna’s founder, Srila Prabhupada. More and more people flooded the small area, choking it with bodies. A step ladder was soon delivered to the float’s front, and a man holding an umbrella shielded Srilla Prabhupada’s statue from the harsh May sun. Converging like a pit crew, a number of men in dhoties (robes) grabbed hold of the idol and quickly ferried it through the crowd to a tent dedicated to housing the Acharya (founder).

After the dancing subsided, the feast tent doled out plates of vegetarian fare and a long line of people wrapped around the corner where they eagerly awaited the meal. In scattered pockets were Deathfest stragglers and a number of Inner Harbor tourists sporting American flag camouflage. Everything meshed together, and the crowd glowed with elation, which I ascribed to free food, warm weather, and the spectacle of Hare Krishna.