Just another night in the empire. 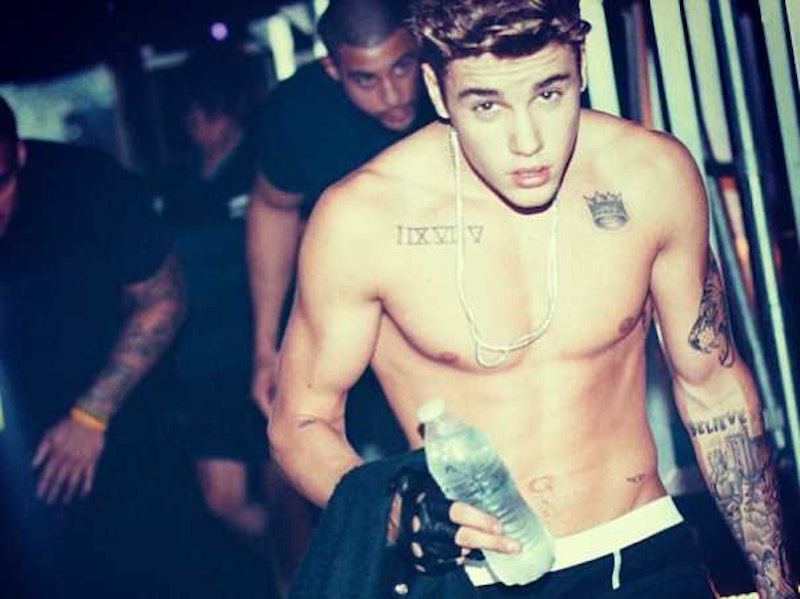 Justin Bieber picks up his milkshake. He grips the steel straw and stirs the shake (vanilla) mindlessly as two associates, Lil Za and Lil Twist, finish rolling 40 blunts of high-grade marijuana laced with cocaine and dipped in liquid codeine. There are half a dozen other people inside, but poolside, it’s dead quiet. “Where’s the fucking weed at,” Justin asks, looking up at the night sky. He thinks to himself: “There are so many stars up there... but they’re all dead.” Lil Za carefully installs the last blunt in a bizarre, misshapen Jenga-like construction that barely remains intact on the smooth, aqua sea foam glass table at the edge of the pool. “Turn up,” Justin shouts as he bounds up and grabs the crowning club, and the whole mutilated marijuana pyramid completely falls apart. Half the blunts roll gently over the edge and into the water. No one yells Jenga. More and more of the blunts are lost as Twist and Za scramble on their knees, skittering about, mumbling “ohfuckohfuckohfuckohfuckohfuck” as they salvage what’s left, heads turned, worried their Master is about to kick them both in.

Justin Bieber does not react. His face looks ashen and rubbery as he kills half the blunt in one long drag. This takes approximately three minutes. Complete silence as Twist and Za turn around on their wet green asses, waiting for something from him. Justin looks down at his crones with no emotion—he is not upset. “Turn UP!” They head back into the house and snort seven foot-long lines of cocaine each and make jokes about Subway. “Five hundred dollar footlong!” Everyone in the room—all male—is completely frying, grinding their teeth into chalk and shouting at each other in incomplete sentences and word fragments like “Strout” and “Dong.” Justin still does not know he is a drug addict. Justin knows he is alone. Justin thinks about Selena and their first time—how he smoked meth with her backstage in Kansas. How he never wanted her to do Spring Breakers. How he treated her like an asset when he knew she was his rock. These things rang with an out of body clarity as the cocaine coursed through Justin’s body and made everything tight, tight, tight. He hasn't felt love since Selena.

Justin’s father Jeremy, 36, emerges from the bathroom upstairs and trips on a piece of toilet paper, sending him violently down the uncarpeted spiral staircase, landing in a pile, his body making wet snapping sounds. No one notices.

Justin Bieber is weeping uncontrollably on the floor of his living room, collapsing to his knees on a Persian rug made of dyed human hair, knocking his head on the coffee table and spraying blood and cocaine everywhere. Someone’s iPhone starts ringing loudly (“Marimba”) and this makes him start to sort of cry-scream, shredding his voice as Twist fumbles with his Otterbox. Justin is howling, banging the table and cracking the glass as he knocks more and more cocaine onto the carpet. Pools of bloody green-yellow snot collect beneath his streaming faces as they mix with his tears. He calls out to God asking WHY? banging the wood floor now, bloody knuckles and split lips. No one knows what to do except Lil Za. He leans in between one of Justin’s crying jags and whispers in his ear, “Let’s get the eggs.” His breathing slows, and sucking up phlegm back into his nose, he turns to Za with dead eyes and says quietly, “Turn up.”