It Takes a Peashooter

NPR knows best, and following orders, I’ll cope with world events by attending a Paul McCartney concert. I amaze myself. 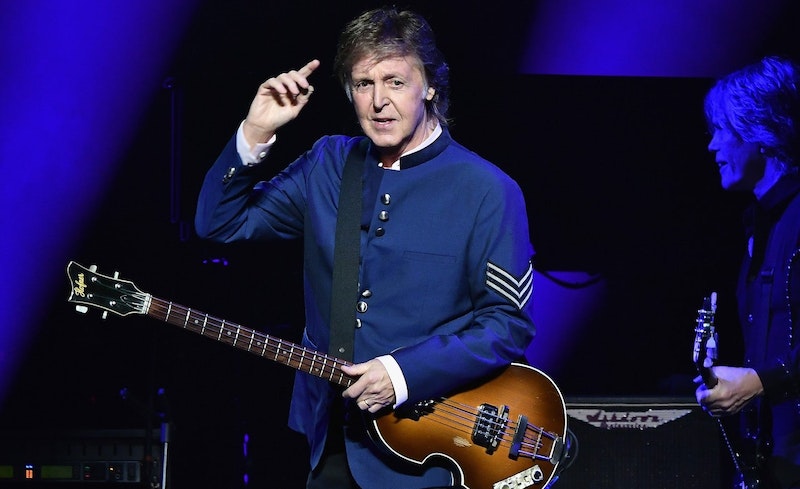 Like many, I thought NPR’s “Life Kit” post on February 25 about “coping with the stressful news cycle” was a rib-tickler. Twenty years ago, it wouldn’t be unreasonable to think the “five tips” to keep it together while, it goes without saying, “standing” with Ukraine by donating to bureaucratic organizations like UNICEF or the International Red Cross, was a parody. No dice, Chuck and Ginny.

Here's one way to cope (not only about Ukraine but the potential midterm disaster for Democrats in November): “If you’re feeling your body contracting or overheating, step away from whatever you’re doing and take a deep breath.” Normally, that’s good advice if you’re ill or having a panic attack over a cracked tooth, but “the world shifting” because of Putin doing Ukraine dirty, doesn’t qualify for the majority of American citizens, unless, perhaps, you’ve sunk a lot of money in the financial markets casino.

The ”Tool Kit” also recommends “deep cleaning or comfort decorating to create a cozier space… or jump staring your exercise routine.” I don’t want a “cozier space,” thanks, and “comfort decorating” sounds like its meant for a female demographic over the age of 70. I won’t continue, so as not to cause “comfort barfing,” but this one’s my favorite in the NPR land of wellness and worrying about the loss of the United States’ democracy. “The kitchen is a safe space for a lot of us. Maybe this is the weekend that you finally re-create Grandpa’s famous lasagna, or learn how to make a prettier pie, or maybe just lose yourself in some kitchen organization.” I never knew my grandparents, and nothing “famous” came out of my mother’s kitchen (except “American Chop Suey,” which was a euphemism for goosed-up leftovers in one pot), so my “safe place” isn’t so safe. Perhaps “I’ve lost the plot,” but last time I was assaulted by this sort of nonsense, I thought “safe spaces” were exclusively for chickenshit college students, while still matriculating, before they demand that the government pick up the tab for their education, whether the acquisition of such knowledge is “safe” or “dangerous.”

In the event I’ve missed the “spirit” of NPR’s don’t-let-Putin-drive-you-crazy routine—unlikely, but sometimes I scare myself—I do take a break from the now-you-believe-it, now-you-don’t news cycle, but that’s happened for years and years. I read novels, watch TV shows like Cobra, Traces and Vienna Blood, hang out with my family, chat with friends at the coffee shop, and usually, but maybe not this year, watch the Red Sox on the tube. In honesty, that last “escape” is always more “stress-inducing” than the news cycle, my stomach torn inside out with each pitch, but I can process a loss pretty quickly.

This might qualify. Several weeks ago, I saw a story in The Baltimore Sun about Paul McCartney’s upcoming 13-city North American tour, “Got Back,” and, incredibly, Paul’s playing on June 12 at Camden Yards, the Orioles’ still-magnificent stadium in the City That Time Forgot. I stunned my son Nicky when I texted him, delivered the news and asked if he wanted to go. Nicky’s a big McCartney fan—even some of his later junk, which for me, means almost everything after 1970—and I knew he’d want to see the Former Beatle before he croaks. (No time soon, I’d wager, just like Jagger and Dylan, all locks for the Century Club and a mention from Al Roker on The Today Show, giving five-word explanations for their longevity.) The invitation was impulsive, since I dislike nostalgia concerts, but then again, there’s the upside of spending time with my older son—we always have a great time gabbing about music—and now that the initial reports that tickets were fetching more than $500 for shitty seats have been debunked, we’ll be ready to go. If I’m lucky, there won’t be an opening act, just Paul and his subservient band (maybe Ringo’s along for the ride?) and he’ll play for two hours and not a minute more. I’m told that’s unlikely.

The last time I attended a Boomer show was at the Verizon Center in D.C. in 2012, featuring Bob Dylan. It sucked, but Nicky wanted to see him for the first time (Booker was reluctant, but a good sport, even though when I asked on the way home what his favorite song was, he was curt, “None.”), and though I wasn’t the least bit curious about The Riverboat Gambler and his incomprehensible re-workings of long-ago songs, it had its moments, such as the opener “I’ll Be Your Baby Tonight.” I thought it was funny that the boys saw friends from high school in Baltimore, accompanied by (mostly) dads with ponytails, Dylan t-shirts and cell phones, and while counting the minutes for the ordeal to end, I congratulated myself by being able to identify the song Bob was croaking within 10 seconds, long before our section neighbors caught on.

I did see the Everly Brothers in 1987—definitely nostalgia—but that was held at London’s Royal Hall (coincidentally, they had a minor hit three years earlier with the McCartney-penned “On the Wings of a Nightingale”) a venue I’d always wanted to see.

Unlike Dylan (five times), I’ve never seen a Beatle live. I was too young to attend in New York City before they stopped touring, had zero interest in Wings, and, to my regret, had to pass on the $9 ticket for George Harrison’s “Dark Horse” tour in ’74 since I couldn’t get anyone to cover my shift at work. John’s appearances in the early-1970s were scattershot, so I missed him too. I’m ready to see McCartney, satisfying a very, very small itch. I’d like to hear him sing “Fixin’ a Hole,” “Eleanor Rigby,” “Helter Skelter,” “For No One,” “Blackbird” and “Penny Lane,” and, as I’m told he performs tunes from his former bandmates, maybe John’s “And Your Bird Can Sing,” and George’s “Only a Northern Song.” And for a near-impossible bonus: renditions of “Down in the Boondocks,” “Just A Little,” “Ain’t that Peculiar,” “Midnight Confessions” and “Kid Charlemagne.”